On February 22, 2019 (JST), Hayabusa2 successfully completed the first touchdown to sample materials from asteroid Ryugu. The extremely high-resolution images acquired during touchdown revealed a large quantity of reddish-dark particles thrown upwards with the rocks. It is thought that these particles had been adhered to the surfaces and inside pores of rocks but were disturbed during the impact of the bullet and thruster jets during touchdown.

These reddish-dark materials are sparsely distributed in a depth ranging from Ryugu's surface to a few meters. The interiors of older craters also appear reddish-dark, while younger craters have a bluer interior than their surroundings. From comparison of the age of these craters, surface reddening of Ryugu occurred during a short period between 300,000 and 8 million years ago. The interiors of craters formed before this period turned reddish-dark along with the asteroid surface, while younger craters were evacuated after the red material had formed and exposed fresh interior rock unaffected by the coating. The best explanation is the reddish-dark material was created when the surface of Ryugu was burned by the Sun.

This suggests that Ryugu was in an orbit closer to the Sun in the past. As both reddish-dark material and the unaltered blue-bright material were present on the surface at the landing site, it is expected that both the altered and unaltered materials have been collected. 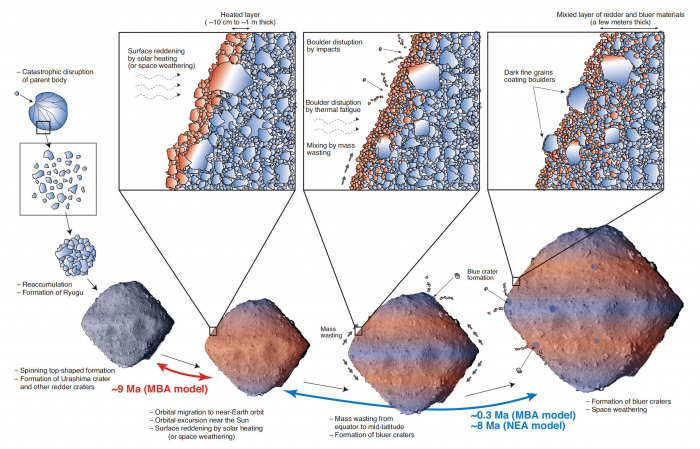