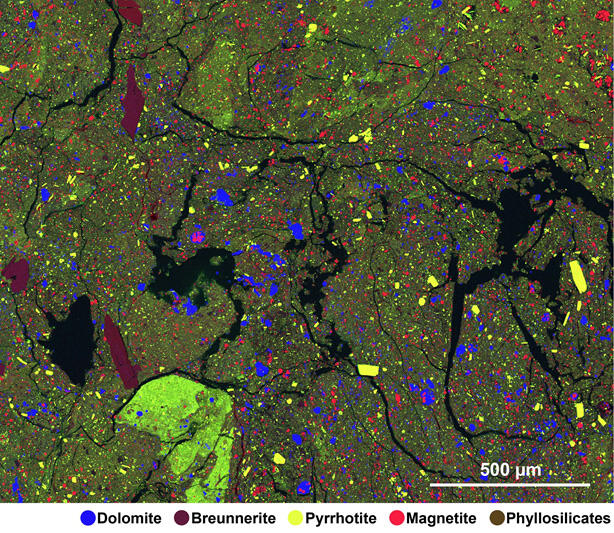 Constituent minerals of the Ryugu sample. All recognizable minerals in this figure are secondary minerals that were formed by aqueous alternation within Ryugu's parent body (from Yokoyama et al., 2022).

A summary of recent results from the Chemical Analysis Team in the Hayabusa2 Initial Analysis Team has been published in the American scientific journal, "Science", on June 10, 2022.

Measurements have been conducted of the chemical and isotopic compositions of the sample returned by asteroid Ryugu by the Hayabusa2 mission. Ryugu was found to be comprised primarily of carbonaceous chondrites, especially the Ivuna-type carbonaceous chondrites known as CI chondrites. The main constituent minerals are secondary minerals that would have precipitated out from aqueous solution in the Ryugu parent body. The aqueous liquid in the parent body altered the primarily minerals that would have been originally present, and deposited the resultant secondary minerals during a time about 5 million years after the birth of the Solar System. The temperature during these changes was about 40℃, with pressures not exceeding 0.06 atm. Subsequently and to this day, the Ryugu sample is believed to not have been heated above 100℃. From these results, it can be concluded that the Ryugu sample has the most primitive characteristics without chemical differentiation of any natural sample available to humans, including the meteorites discovered so far. In the future, the Ryugu sample will be studied internationally as a new Solar System reference material.