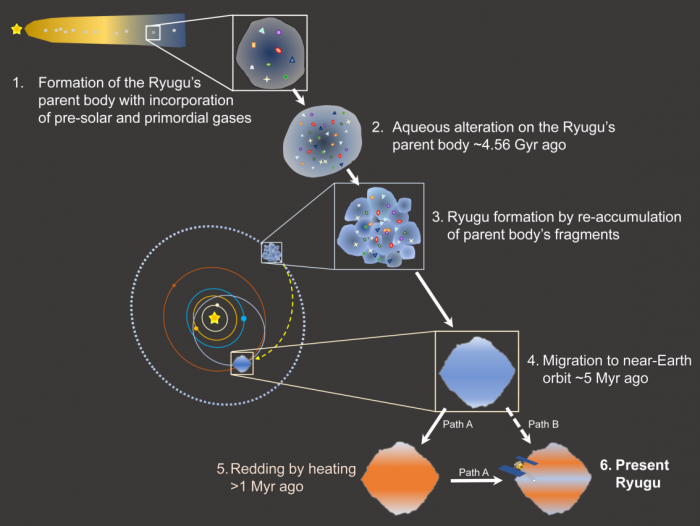 Figure 1: Diagram of the evolution of asteroid Ryugu.（©Okazaki et al., 2022a）

This analysis measured the isotopic composition of the noble gases and nitrogen in the surface and sub-surface material from the near-Earth asteroid Ryugu, which was returned to Earth by the Hayabusa2 mission. The abundance and isotopic compositions of volatile elements such as noble gases and nitrogen tells us about the original materials that formed the parent asteroid of Ryugu, fragments of which later accumulated to form the present-day Ryugu. Volatile abundances can be affected by processes in the asteroid, such as heating or reactions with water. In this research, noble gases and nitrogen in Ryugu were investigated as a probe for the origin and evolution of Ryugu from the beginning of the formation the parent asteroid to the current surface geological processes.

The Ryugu sample was found to contain primitive noble gas from the early Solar System in abundances greater than that found in any meteorite reported to date. The nitrogen isotope composition differs within the sample grains, indicating that a variety of nitrogen-baring materials from the early Solar System are still preserved within the Ryugu sample.

As well as the primordial gas from the formation of the early Solar System, the sample contained two additional types of noble gases, one produced by reactions triggered by the irradiation of galactic cosmic rays, and the other originating from the implantation of the solar wind. The abundance of solar wind-derived noble gases contained in many of the Ryugu grains was very small. Of the ten grains recovered from the first touchdown and the six grains recovered from the second touchdown that were analysed, most did not contain solar wind noble gases. Only two grains contained a clear signature of solar wind noble gases equivalent to 3,500 years and 250 years of irradiation respectively, at Ryugu's present orbit. Since the solar wind only hits the outermost layer of the rocky material, these grains must have been on the outermost layer for 3,500 years and 250 years, respectively. The second touchdown sample was collected near the artificial crater and is expected to contain sub-surface material. Since this second touchdown material does not contain much solar wind-derived noble gases, it was concluded that the sub-surface material at a depth of 1-2m has not been stirred greatly.

The amount of galactic cosmic ray-produced neon suggests that the period of galactic cosmic ray irradiation of the Ryugu sample was about 5 million years. Two ages have been proposed for the surface of Ryugu, based on the number of craters. An age of 2 to 8 million years is estimated assuming that the craters were formed due to collisions while Ryugu was in a near-Earth orbit, while an age of 100,000 to 300,000 years is estimated for craters via more frequent impacts in the asteroid belt. The galactic cosmic ray irradiation period obtained from the noble gas analysis is consistent with the former age, suggesting that Ryugu moved from an orbit within the asteroid belt to a near-Earth orbit where there were fewer surface impacts about 5 million years in the past (Figure 1).

When Ryugu sample grains were heated to a temperature of 100℃ in the vacuum chamber, part of the noble gases produced by galactic cosmic rays was released which corresponded to an irradiation period of 1 million years. This implies that the Ryugu surface material has not experienced temperatures of 100℃ during the past million years. Multi-band imaging from the Hayabusa2 spacecraft of the mid-latitude region of Ryugu revealed material that appeared reddish (reflected more strongly at redder wavelengths). Previous studies have suggested that this reddish material may have been formed when Ryugu was intensely heated due to being close to the Sun for a period of time. If the cause of this reddening is heating from proximity to the Sun, then it must have occurred more than a million years ago (Figure 1).

A dehydrated space-weathered skin cloaking the hydrated interior of Ryugu