Brian May, the lead guitarist from the British rock band, Queen, has created a stereoscopic image of Ryugu from photographs captured with the ONC-T camera onboard Hayabusa2, so that the asteroid can be viewed in three dimensions. Brian May is an astronomer, with a doctoral degree in astrophysics from Imperial College London. He has a strong interest in planetary defense or space guard, which considers the potential threat to the Earth from meteorites. As part of this, May is a core member of "Asteroid Day", that began about three years ago to increase awareness of asteroids and action that can be taken to protect the Earth.

Held on June 30th each year, Asteroid Day draws attention to the risk of collisions from celestial bodies on the Earth. The day marks the anniversary of the Tunguska explosion in Russia that occurred on June 30, 1908 due to an incoming meteroid. Within Japan, the Japan Spaceguard Association and member of JAXA are also involved in Asteroid Day. In particular, the two asteroids explored by the Hayabusa and Hayabusa2 missions, Itokawa and Ryugu, both have orbits that approach the Earth, and data from these missions is also being used to better understand planetary defense.

Brian May has previously created images to sterescopically view celestial bodies, and approached the Hayabusa2 Project to propose a stereoscopic image of Ryugu. May corresponded with Dr Patrick Michel from the Côte d'Azur Observatory, France and member of the Hayabusa2 Project (the two scientists are seen in Figure 1). According to Michel, Brain May was very pleased when he received the images of asteroid Ryugu from the Hayabusa2 team as the stereo image could then be created very quickly. 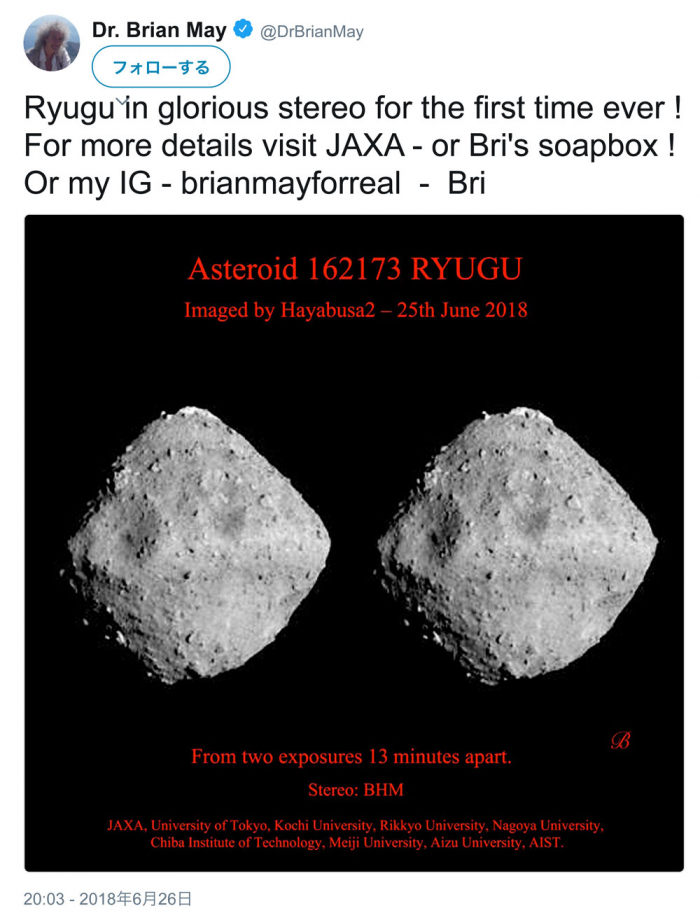