We have successfully imaged asteroid Ryugu using the Star Tracker aboard Hayabusa2. The obtained data will be used for optical navigation.

Hayabusa2 is currently operating its ion engines as it heads toward Ryugu. On 11 May, it temporarily turned off its engines and used its Star Tracker1) to obtain images of Ryugu. These observations of the asteroid from the spacecraft will be used for optical navigation2). 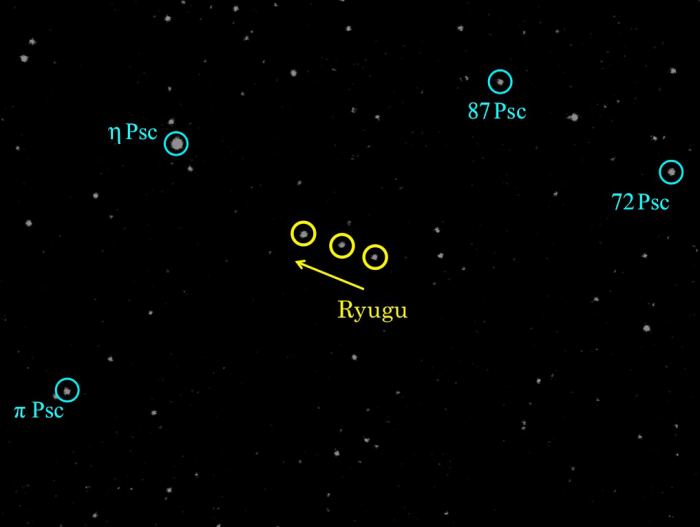 Fig. 1: Asteroid Ryugu as imaged by the Star Tracker of Hayabusa2. Yellow circles show positions of Ryugu, which is moving from right to left. Imaging times from the right were around 1:00 on 12 May, 2:00 on 13 May, and 1:00 on 14 May (JST). From the spacecraft's perspective, Ryugu is moving toward Pisces (Psc).
(Image credit：JAXA, Kyoto University, Japan Spaceguard Association, Seoul National University)

1) These devices are normally used to determine spacecraft attitude by calculating the positions of fixed stars. In this case, we used it in an imaging mode similar to a camera.

2) Spacecraft trajectories are normally determined using radio waves, which is called radio navigation. When Hayabusa2 arrives at Ryugu, we will measure the asteroid's direction from the spacecraft and use that data to more accurately estimate their trajectories. This is called optical navigation.