DESTINY⁺ is a science and technology demonstration mission to asteroid (3200) Phaethon, the parent body of the Geminids meteor shower. It will explore the asteroid during a flyby, and conduct scientific observations of cosmic dust, which is considered to be a source of the organic matter on Earth. This mission will demonstrate technologies that will enable future low-cost and high-frequency deep space exploration.

The deep space exploration technology demonstrator DESTINY⁺ (Demonstration and Experiment of Space Technology for INterplanetary voYage with Phaethon fLyby and dUst Science) will be launched into Earth's orbit by the Epsilon S rocket with an additional kick stage. It will then be accelerated by ion engines to increase its orbital altitude, and will eventually escape from the Earth by lunar swing-by. This mission will demonstrate deep space exploration capabilities by small rockets. In comparison with DESTINY⁺, Hayabusa and Hayabusa2 were launched directly into deep space by a large-scale rocket. DESTINY⁺ will be equipped with four engines, which are an improved version of the proven μ10 ion engine. They will be operated under direct sunlight and shade, and the loop heat pipe will be used to exhaust and retain heat efficiently. DESTINY+ will also demonstrate a new thermal control device, the reversible thermal panel. In addition, a thin-film, lightweight solar array panels with the world's highest specific power will be used for the first time to supply large amounts of power to the four ion engines operating simultaneously for full-scale demonstration.

In-situ analysis of interplanetary and interstellar dust using the dust analyzer, developed under the leadership of the University of Stuttgart and supported by DLR (Deutsches Zentrum für Luft- und Raumfahrt), will be carried out during the interplanetary space till reaching the target asteroid Phaethon, as well as during the flyby of the asteroid. It will investigate the composition, mass, velocity, and direction of arrival of the dusts from Phaethon. Phaethon's flyby survey will be conducted at speeds over 33 km/s with two cameras that will image the surface. The acquisition of this flyby technology is expected to dramatically increase the number of celestial objects that can be explored.
The kick stage developed for this mission consists of a small upper stage solid-state motor with the world’s highest motor-to-mass ratio, and is expected to be used for various exploration missions in the future. This will enable deep space exploration using an Epsilon S rocket. 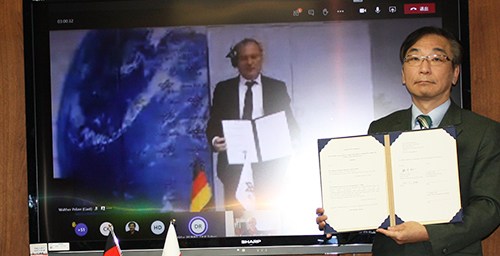