Trajectory design research using machine learning techniques has rapidly attracted attention in recent years. In this study, we apply Deep Neural Networks (DNNs), one of the machine learning methods, to design multiple flyby *1 trajectories towards small bodies. One of the bottlenecks of machine learning approaches is the heavy computation time to generate massive trajectory databases. In particular, trajectory optimization problems take about several seconds even for simple problems, and it takes more than 1 year to generate more than 10 million data points (more than one month even if 10 threads of parallel computation are used). In this study, we developed an algorithm that can generate more than 10 times as much training data from a single trajectory optimization result. As a result, the computation time was significantly reduced, and we succeeded in designing trajectories that allowed multiple flybys (flyby cycler trajectories) of objects from the massive asteroid database.

In recent years, small body exploration has attracted much attention in order to deepen our understanding of the formation of the Solar System. More than one million small bodies have been discovered in the Solar System so far. The frequency of JAXA's sample return missions is about once every 10 years, so it would take too long to obtain statistical information on such small bodies. One of the mission design solutions is utilizing an idea known as “asteroid flyby cycler” trajectories (Fig. 1).

An asteroid flyby cycler is an orbit that alternately flybys the Earth and asteroids, such as Earth → asteroid #1 → Earth → asteroid #2 → Earth → .... When performing an Earth flyby, the spacecraft trajectory is bent by the Earth's gravity. By effectively using gravity assiststhe amount of fuel required for a multiple flyby route can be greatly reduced. In fact, NASA's Lucy mission adopts such an asteroid flyby cycler trajectory to perform Trojan asteroid flybys.
The asteroid flyby cycler trajectory design problem is a class of global trajectory optimization problem *2 with multiple flybys, in which two types of optimization problems are nested: a combinatorial optimization problem *3 to determine the sequence of flybys and a trajectory optimization problem for a given flyby sequence. In particular, as the number of flyby targets increases, the computation time for the optimization problem increases exponentially, making it difficult to complete the computation in a realistic amount of time. Traditionally, evolutionary computation *4 methods have been used to solve such global trajectory optimization problems. Evolutionary computation tends to require a large amount of computation time because it does not take advantage of the "experience" of experts, such as "a small body with some specific orbital elements would be easy to access”. Therefore, the authors proposed a machine learning approach to model "experience" as a surrogate model *5 and perform a global search utilizing the surrogate model. Because one of the bottlenecks of machine learning approaches such as DNN is the computational time required to generate a large trajectory database, we have established an efficient database generation method that can generate 10 times more data in the same computation time by introducing pseudo-asteroids that satisfy the optimality condition (= Karush-Kuhn-Tucker condition *6) (Fig. 2). The proposed method was applied to the extended mission after the Phaethon flyby of DESTINY+, demonstrating the applicability to the actual mission.

The surrogate model developed in this study can be used universally, regardless of the launch date or orbits of the small bodies. Therefore, it can be reused when considering new missions!
The asteroid flyby cycler (Fig. 3) can be achieved even with a small ΔV of ~10 m/s per year (of course, a high orbital control capability such as DESTINY+ will allow a greater degree of freedom in the flyby candidate selection). The time required for the "Earth→Asteroid X→Earth" orbit transfer is discontinuous (about 6 months, about 1 year, about 1.4 years, about 1.5 years, and so on). Therefore, the spacecraft can fly by asteroids with a >6 months frequency with ~10 m/s per year ΔV consumption. Since it requires little fuel consumption, this mission can be achieved even with a CubeSat or a micro spacecraft.

JAXA/ISAS is planning to develop a new small body exploration strategy by synergistically combining "sample return" for deeper exploration and "multiple flyby" for wider exploration. The asteroid flyby cycler trajectory obtained by this research result plays a part in this strategy. 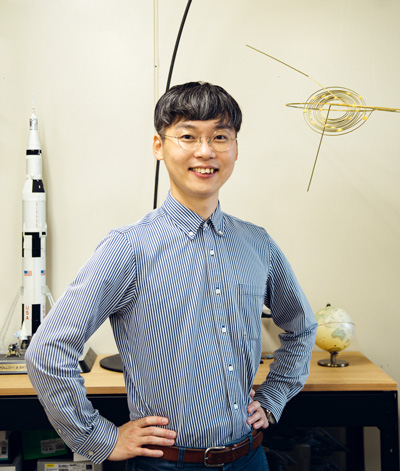