The analysis of high-resolution images captured during the close proximity operations by Hayabusa2 to asteroid Ryugu with the Thermal Infrared Camera (TIR) and the Optical Navigation Cameras (ONC) have revealed a population of ultra-high porosity boulders. These boulders are light enough that they would float on water.

Ryugu is thought to have initially formed as a fluffy planetesimal that coalesced from accumulated dust in the early Solar System, and subsequently underwent processes such as thermal evolution and compression. This parent body was then later destroyed in a collision and fragments of this reaccumulated into the asteroid. However, planetesimals have never been seen, so whether they really existed or what they may have looked like is one of the biggest challenges in understanding the planet formation process. The boulders discovered in this research are thought to be a material that most strongly retains the appearance of the fluffy planetesimals that triggered the birth of the planets in the Solar System.

Additionally, the data from all the scientific instruments onboard Hayabusa2 that were used to examine the surface of Ryugu revealed that fragments of material similar to those of the ultra-high porosity boulders are globally distributed over the asteroid surface, and may have been collected in the sample taken by Hayabusa2. If highly primitive material with the ultra-high porosity discovered here is also found in the collected samples, it will both clarify the formation and evolutional history of Ryugu's parent body, and also provide evidence of planetesimal formation in the early stage of the Solar System formation process.

The surface of asteroid Ryugu is thickly covered with boulders. Observations with the TIR and the infrared radiometer (MARA) mounted on the MASCOT lander have found that the majority of these have a lower thermal inertia than that of the carbonaceous chondrites found on Earth. (Thermal inertia is a measure of how easily the surface can be warmed or cooled. The lower the thermal inertia, the faster heat can be gained and lost, making it easier to warm in daylight and cool at night.) "Low thermal inertia" of the boulders is equivalent to "high porosity" or "low density", and the estimated porosity of the boulders on Ryugu is 30 - 50% (Grott et al., 2019; Sugita et al., 2019; Okada et al., 2020).

In this research, we made a comprehensive study of the TIR proximity imaging data (spatial resolution 45 m / pixel or better) acquired from an altitude of 500 m or lower to search for locations on Ryugu with abnormal temperatures. Low altitude images were captured during spacecraft descent operations, such as the rehearsals for touchdown by Hayabusa2 and the descent to deploy the MINERVA-II rovers and the MASCOT lander to the surface of Ryugu. This revealed places (hot spots) where the temperature was very high compared to the surroundings in the center of two small craters with diameter less than 20 m. A detailed thermal analysis showed that the thermal inertia of these hotspots is comparable to that of the lunar surface, and lower than anywhere else on Ryugu.

A high-resolution image captured with the ONC during a descent operation was obtained for one crater, which found that the hotspot was an aggregate of 10 cm sized black boulders. The black boulders therefore have a higher porosity than the other boulders on Ryugu, with an estimated value of 70% or more. This corresponds to a density of about 0.8 g/cc or less; light enough to float on water (density 1 g/cc). The image is similar to a pumice stone used to remove dead skin cells on your foot.

High resolution ONC images are not available to show the details of the hot spot in the second crater, but results from the onboard near-infrared spectrometer (NIRS3) show absorption at 2.72 microns inside of the crater due to the presence of hydroxyl groups. This is stronger than the absorption in the surrounding region and so must be from the material exposed when the crater was formed in relatively recent years. 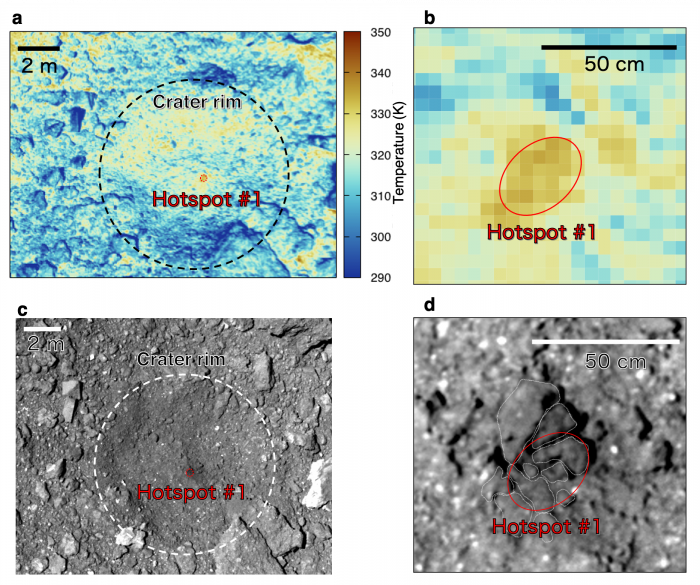 Figure 1: TIR images (a, b) and ONC images (c, d) of the discovered high porosity boulders (hot spot area is indicated in red). The images on the right are enlargements of those on the left, and in the ONC image (d), the boulders near the hot spot are outlined in white lines. These boulders may have a very high porosity (from ©Sakatani et al., 2021).

In the scenario for the formation of Ryugu's parent body, a fluffy planetesimal formed in the early Solar System through gathering dust. This planetesimal subsequently experienced internal heating from the radioactive elements such as aluminum-26, and was compressed due to its own gravity to become more firmly solidified (Okada et al., 2020; Neumann et al., 2021). In this theory, the majority of the parent celestial body would have a porosity of 30 - 50%, consistent with most of the boulders on Ryugu. However, the surface of the parent body would have experienced lower temperatures than the central region and less compression. Material here could have maintained the earlier high porosity state and conditions from the initial dust accumulation stage. The ultra-high porosity boulders reported in this paper are consistent with this origin, and are more likely to be primitive material that retains this original information than the majority of the boulders on Ryugu.

Furthermore, the thermal inertia, reflectance and color of the main population of boulders and sandy regions with fewer boulders were investigated using multiple TIR and ONC images during the descent operations. From these, it became clear that the data from the sandy regions can be explained with a mixture where the largest component is from the ordinary boulders and a smaller contribution comes from the ultra-high porosity boulders discovered here. This suggests that the sand contains fine debris of the ultra-high porosity boulders, which may have been collected during touchdown. If this component is found in the future analysis of the sample, it is likely to bring significant empirical evidence not only to the origin of Ryugu but also to the theory of planetesimal formation and evolution.

Figure 2: Formation of the ultra-high porosity boulders (red circle) and their behavior on the surface of Ryugu (from ©Sakatani et al., 2021)