The following figures show the original images taken by the ONC-T, without any pixel smoothing. The order of the photographs is not chronological, but show the sequential rotation of the asteroid. The change in distance is compensated by keeping the size of the asteroid constant through the image set. 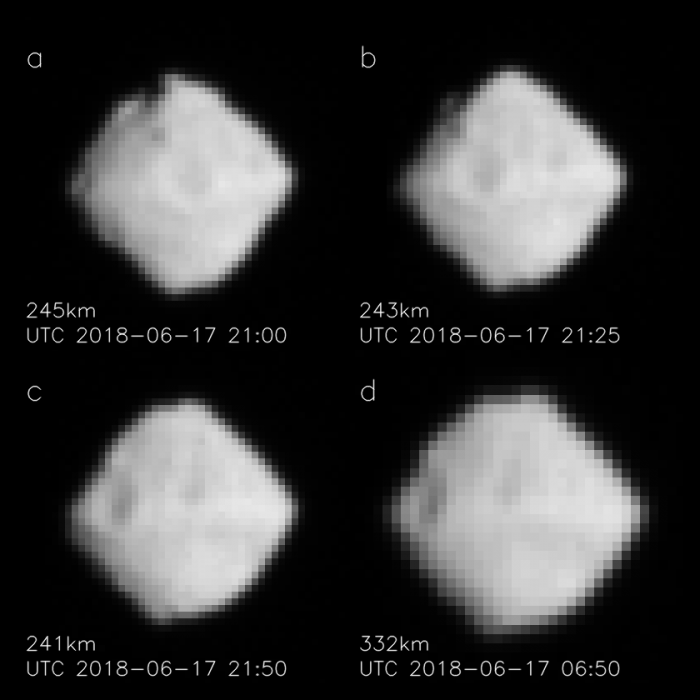 Figure 1: Images of Ryugu taken with the ONC-T. The four photos were taken during 15:00 June 17, 2018, (JST) and at 06:00 on June 18 (JST). The panel labels (a,b, c, d) correspond to the order of rotation.
ONC team: JAXA, University of Tokyo, Koichi University, Rikkyo University, Nagoya University, Chiba Institute of Technology, Meiji University, University of Aizu and AIST.

This next image set is the same as the previous photographs, but with the pixels smoothed and the image processing applied which emphasizes light and dark regions. 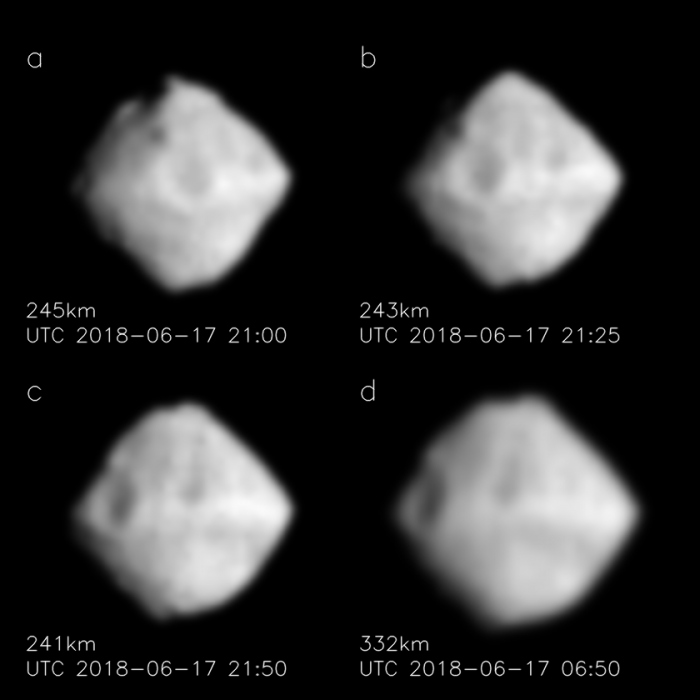 The diameter of Ryugu is about 900m, which is consistent with the prediction from ground observations. However, since the distance between the spacecraft and Ryugu is not precisely determined, there is still some uncertainty in the exact diameter at this time.

The shape of the asteroid looks like a spinning top, with the equatorial part wider than the poles. This form is seen in many small asteroids that are rotating at high speed. Observed by radar from the ground, asteroid Bennu (the destination of the US mission, OSIRIS-REx), asteroid Didymous (the target of the US DART project), and asteroid 2008 EV5 that is approaching the Earth, all have a similar shape.

On the surface of asteroid Ryugu, you can see a number of crater-like rounds recessed landforms. In the first image, one large example can be seen with a diameter exceeding 200m. This moves to the left and darkens as the asteroid rotates and the lower part becomes cast in shadows.

The bulge at the equator forms a ridge around the asteroid like a mountain range. Outside of this, the surface topology appears very ridge-shaped, and rock-like bulges are also seen. These details should become clearer as the resolution increases in the future.

When I saw these images, I was surprised that Ryugu is very similar in shape to both the destination of the US OSIRIS-REx mission, asteroid Bennu and also the target of the previously proposed MarcoPolo-R mission by Europe, asteroid 2008 EV5. Bennu and 2008 EV5 are about half the diameter (and 1/8 the volume) of Ryugu, with rotation periods about half as long. In other words, these celestial bodies are small and rotating fast compared to Ryugu. On the other hand, Bennu is a B-type asteroid, which is very similar to C-type asteroids such as 2009 EV5 and Ryugu. Therefore there should also be common properties due to the asteroid type. So we have both differences and similarities that have combined to produce very similar shapes. Why is that? I think this is very interesting. So far, the asteroids we have explored have been different in shape, so Ryugu and Bennu could be the first example that human beings have studied two similar-shaped asteroids. It will be interesting to clarify what this similarity means scientifically.

If the axis of rotation for Ryugu is close to the vertical direction in this image, there is a significant advantage as it will be possible to know almost the entire appearance of Ryugu at an early stage after arrival, making the project planning easier. However, it is also possible that potential landing sites may be limited to the equator of Ryugu. I hope we can find a suitable place to set down the lander and rovers.