The Landing Site Selection (LSS) conference was held on August 17, 2018 and the candidate landing locations for touchdown, MASCOT and MINERVA-II-1 on the surface asteroid Ryugu were decided. In this article, we introduce the landing candidate spots and the planned dates for these surface operations, along with details of the selection.

Figure 1 is a map of asteroid Ryugu showing the landing candidate locations. Please note the direction of north and south on this map (Note). 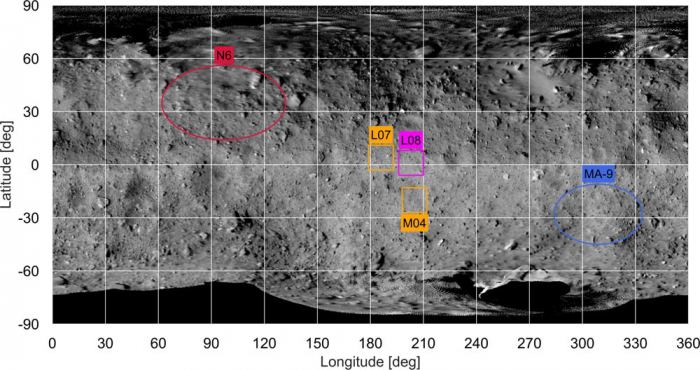 The areas within the colored lines in Figure 1 are the candidate areas for the landing sites for the touchdown of the Hayabusa2 mothership (for sampling), MASCOT and MINERVA-II-1. These are labelled as:

L08 is the first choice (primary) candidate for the mothership's touchdown, with L07 and M04 as back-up options. The designation "L" and "M" refer to low latitude (L) and mid-latitude (M) positions. The "L" candidate positions were selected from among 13 preliminary candidate sites, while the "M" location was chosen from a set of four candidate sites. The size of the site selection rectangles are approximately 100m. MA-9 was selected as the candidate landing site for MASCOT from ten possibilities, while the N6 candidate for MIENRA-II-1 was chosen from seven surface locations.

In Figure 2, each candidate region is shown on the ONC-T image taken during the BOX-C observations at an altitude of 6km. Also in this image, the top of the asteroid is the north pole (Note). Please do note this is the opposite to the publicly released images so far.

Following the determination of the landing site candidates, the operation schedule is as follows: 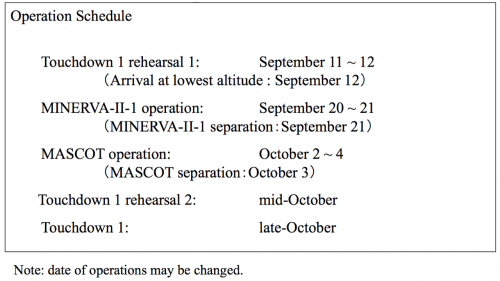 ※Please use the displayed credit when reproducing these images. In the case where an abbreviated form is necessary, please write "JAXA, University of Tokyo & collaborators". 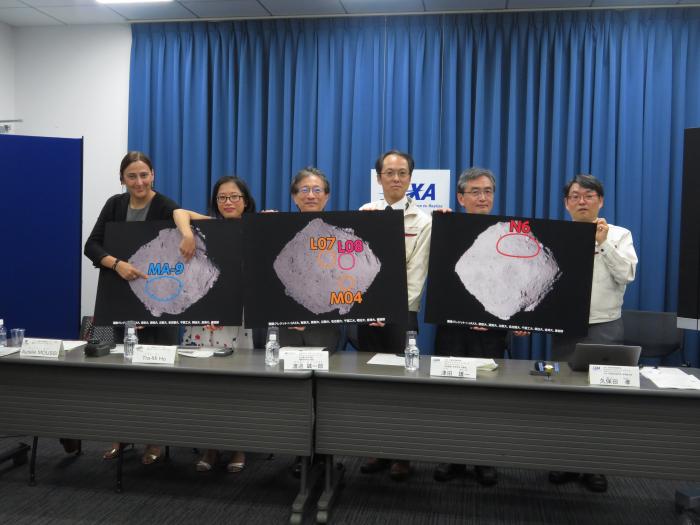