The Change in the Plasma Sheet Source During a Large Storm

Recent simulations [Glocer et al., 2020] have indicated that the source of the nightside plasmasheet can change substantially from solar wind to the ionospheric as a storm develops. The source of the plasma sheet can be determined from the composition. While both the solar wind and ionospheric plasma sources contribute significant H+, the solar wind minor species consist of high charge state ions such as He++ and O+ 6 , while the ionospheric heavy ions are singly charged. Both Arase and Magnetospheric Multiscale mission（MMS） are able to measure He++, so He++ can be used as a solar wind tracer. Comparing the He++/H+ ratio in the solar wind with that in the plasma sheet allows us to determine the fraction of the H+ that comes from the ionosphere.

During a storm on Sept 7 - 9 , 2017 , the Arase apogee was on the nightside, while MMS was coming inbound through the nightside plasma sheet pre-storm, and outbound toward sthe dawnside magnetosheath during the recovery phase. Figure 1 summarizes the event. The top two panels show the IMF Bz and the SYM-H index. There are two time periods when IMF Bz turns strongly southward, indicated with orange vertical lines, and both time periods correspond with a drop in the Sym-H index, indicating storm main phase time periods. 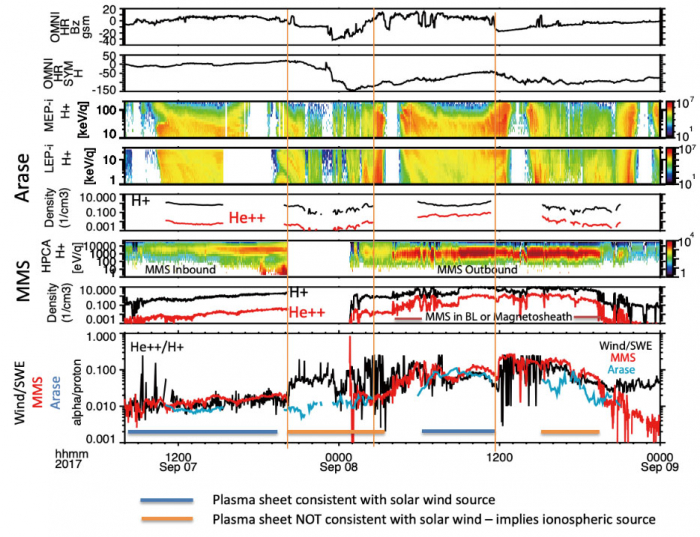 The next three panels show the Arase H+ energy spectra from MEP-i and LEP-i, and the H+ and He++ densities. These are followed by the MMS/HPCA H+ energy spectrum and H+ and He++ densities. The bottom panel compares the He++/H+ ratio at MMS and Arase with that measured in the solar wind by Wind/SWE. Prior to the first main phase, the agreement between the three spacecraft is very good, indicating a predominantly solar wind source for the plasma sheet. During the first storm main phase, when Bz is negative, the He++/H+ measured by Arase is significantly lower than that in the solar wind, indicating a strong ionospheric contribution to the H+. During the recovery phase, MMS moves into the magnetosheath, and so measures a solar wind population, but Arase shows that the plasma sheet has transitioned back to a predominantly solar wind source. During the second southward Bz time period, Arase measures two additional time periods with a strong ionospheric contribution.

These measurements have shown that during a storm, the plasma sheet source changes dramatically from predominantly solar wind to predominantly ionospheric, in agreement with the Glocer et al. [2020] simulations. Arase plays a key role in this study by providing the plasma sheet composition during the storm main phases, when MMS is off or in the magnetosheath.