Collaboration Between the Arase and Van Allen Probe（NASA）Mission Teams

Determining the physical mechanisms that produce electron flux enhancements in the Earth's radiation belts is one of the most important unresolved questions in inner magnetospheric physics. This was emphasized as the primary mission-level science question for both the Arase and Van Allen Probes missions. To address these types of questions and to enable joint science between the two missions, it is imperative that the electron measurements be carefully cross calibrated with one another to ensure a high degree of confidence in both datasets. This involves careful consideration of the particle instruments' behavior during on-orbit operation and detailed computer modeling of the instruments' characteristics.

The MagEIS（Van Allen Probes） and HEP/XEP（Arase） instrument teams collaborated closely since the launch of Arase in 2017 to perform such work. This was first achieved through informal gatherings at Fall AGU meetings between the Arase and Van Allen Probes energetic particle teams （Figure 1）. These meetings, where instrument cross calibrations between the two missions were discussed in great detail, were beneficial to both groups and have had a lasting impact on the quality of the energetic particle measurements from both missions. These activities also led to coordinated science campaigns to improve cross calibrations and to two week-long visits by the authors to Nagoya University to further collaborate and dig deeper into the intercalibration questions. Importantly, the results of this work have enabled a number of important scientific studies that would not have been possible using the particle data only from one mission alone. Unlocking the mysteries of the Earth's radiation belt is truly an international effort and we are forever grateful to the Arase team for their hard work on these difficult problems. Our collaborative efforts and the relationships established greatly enhanced the scientific return from both missions. 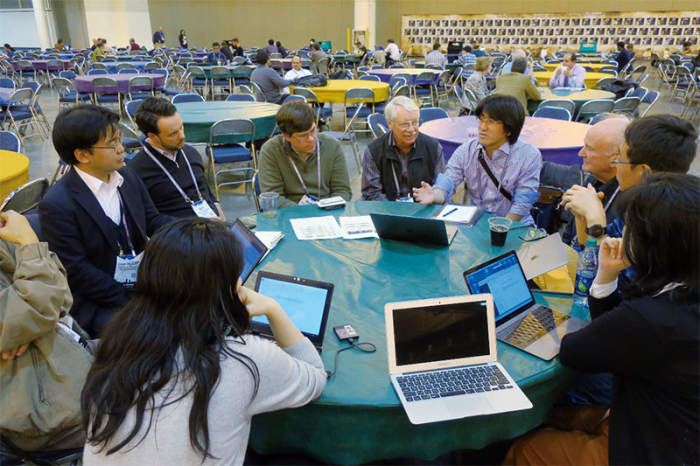 Figure 1. Members of the MagEIS and HEP/XEP instrument teams engaged in a lively discussion at the 2017 Fall AGU Meeting.