Collaboration on in-situ measurements of electromagnetic waves in space plasmas

Measurements of electromagnetic waves in space plasmas are an important tool for our understanding of physical processes in this environment. Arase, with its sophisticated onboard instrumentation, can be used as a state-of-the-art tool for investigation of these processes in the Earth's magnetosphere. Collaboration of the Department of Space Physics, Institute of Atmospheric Physics of the Czech Academy of Sciences with the Arase team on this subject started well before the launch of Arase and continues up to present. During our regular visits to the Nagoya University and Kanazawa University and during visits of the colleagues from different Japanese institutions to Prague, we had many fruitful discussions on diverse subjects related to measurements of electromagnetic waves in space.

Our collaboration initially started during the design phase of the project, when we discussed onboard analysis of signals from magnetic and electric antennas, leading to determination of crucial parameters describing polarization and propagation properties of measured waves. We then continued to work together on interpretation of measurements in terms of wave vectors, Poynting vectors, planarity, and coherency estimators of the wave fields. As an example of our common results, intercalibrated measurements of intense whistlers by Arase and Van Allen Probes can be given. This work has been recently published in Journal of Geophysical Research: Space Physics.

Inter-calibration of data from different spacecraft missions is necessary for combining their measurements in empirical models or in case studies. We showed results collected during a close conjunction of the Van Allen Probes and Arase. （An example is shown in Figure 1 .） The inter-calibration was based on a fortuitous case of common observations of strong whistlers at frequencies between a few hundred hertz and 10 kHz, which were generated by the same lightning strokes and which propagated along very similar paths to the two spacecraft. Measured amplitudes of the magnetic field fluctuations were the same within ~ 14 % precision of our analysis, corresponding to 1.2 dB. Electric field measurements showed twice larger amplitudes on Arase compared to Van Allen Probes but they started to match within ~ 33 % precision（ 2.5 dB） once the newest results on the interface of the antennas to the surrounding plasma were included in the calibration procedures. Ray tracing simulations helped us to build a consistent scenario of wave propagation to both spacecraft. We thus successfully inter-calibrated the polarization and propagation parameters obtained from multicomponent measurements. We also succeed in linking the spacecraft observations to localizations of lightning return strokes by two different ground based networks which independently verified the correctness of the Universal Time tags of waveform measurements by both spacecraft missions, with an uncertainty better than 10 ms.

We are looking forward to our future collaboration on the Arase mission during the current solar cycle 25 , part of which will be also covered by simultaneous measurements of the European Cluster mission, on which we actively participate. During our approach to the anticipated maximum of this cycle, and later on, during the anticipated declining phase, we can expect observations of many events of strongly amplified electromagnetic waves. These events have established links to dangerous phenomena leading to particle acceleration in the Earth's magnetosphere, and to potential risks for telecommunication spacecraft in the heart of the outer Van Allen belt. Our goal for future collaboration on analysis of data from the Arase mission is to contribute to our understanding of these fascinating natural processes. 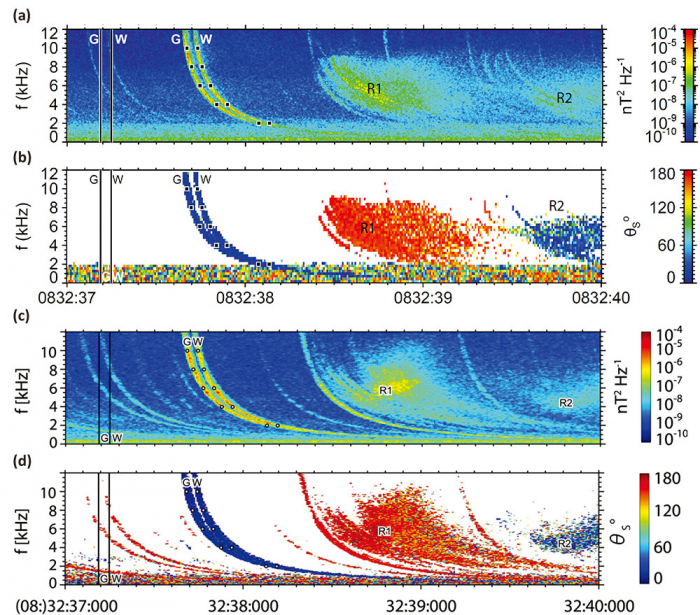 Figure 1: Observations of strong whistlers by（a,b） the Van Allen Probe Band（c,d） Arase on August 14, 2017.（a,c）: total power spectral density ofmagnetic field fluctuations obtained as the trace of the magnetic spectralmatrix;（b,d）: angle between the spectral estimate of the Poynting vectorand the vector of the background magnetic field.