Thomas Zurbuchen, the Associate Administrator for the Science Mission Directorate of NASA and Saku Tsuneta, the Director General of ISAS/JAXA expressed their strong determination to further strengthen such cooperation between the agencies. NASA and ISAS/JAXA have already promoted collaborative research activities in many areas including space science and unmanned explorations.

Thomas Zurbuchen said, "The U.S. and Japan have kept close ties for nearly 60 years. This relationship is one of the most extended and most fruitful partnerships. I visited JAXA's facilities in Sagamihara and Tsukuba and communicated with world-class scientists and engineers. Although this was a short stay, for only a week, I was involved in productive meetings and discussions. I would like to express gratitude for the depth and strength of our relationship and anticipate future outcomes."

Saku Tsuneta stated, "Based on this inter-agency meeting, I have a strong impression that U.S.- Japan cooperation has entered a new era of development. Our close cooperation based on mutual trust between the U.S. and Japan enabled us to minimize the blank period in X-ray astronomy using X-ray Astronomy Recovery Mission. In addition, we have started a new joint project on exploration around the Mars."

In the question and answer session, Zurbuchen mentioned MMX, "We may be working on the first Mars sample return mission." To this statement, Tsuneta added, "Phobos may be covered by Mars substances. It can be said that it will be the first sample-return mission to get Mars substance. "

The video of this press conference is available on JAXA TV at the following URL: http://fanfun.jaxa.jp/jaxatv/detail/10697.html 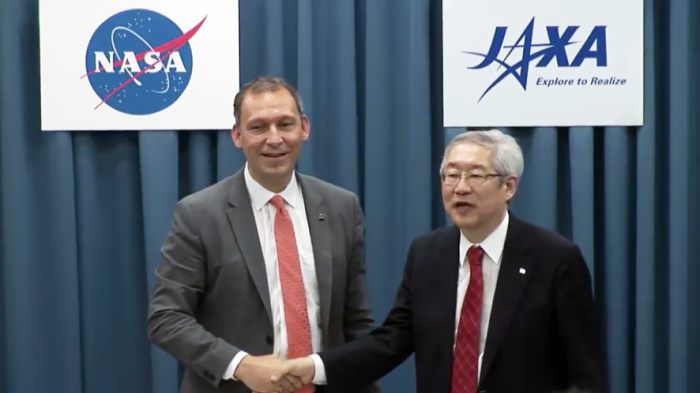