How did the Earth become an inhabited world? Is there life beyond that on Earth? These are questions everyone has once wondered about and have now become a major goal for planetary exploration. "However, the answer may not be found by looking only at the Earth," says Dr. HYODO Ryuki, International Top Young Fellow (ITYF) at the Institute of Space and Astronautical Science (ISAS) and first author of this study.

While surface of Mars today is dry, but it is thought that there was ocean on the red planet's surface until about 3.5 billion years ago. Space agencies from across the globe are therefore looking to Mars for missions in the 2020s. "The strategic idea is that to find traces of life beyond the Earth, we should first look to Mars, as the environment there was once similar to the Earth," Hyodo explains.

Jointly executed by NASA and ESA, the "Mars Sample Return (MSR)" project plans to collect a large quantity of soil samples taken from the Jezero crater and return these to the Earth. The NASA rover, which landed safely on Mars in February 2020, is responsible for sample collection and storing the material in containers for transportation. The containers are to be retrieved from the surface of Mars by a recovery system scheduled for a future launch with the earliest planned Earth return in 2031.

The Jezero crater is thought to be the past location of a large lake that existed billions of years ago. Minerals such as clays that suggest the existence of water have been discovered, leading to the expectation that traces of life may remain. NASA-ESA therefore decided to scrutinize this area. However, in the case of celestial bodies such as the Earth and Mars, we cannot assume knowledge about the entire planet can be informed based on a single location.

This has resulted in new expectations placed on the surface material on the Martian moon, Phobos. Computer simulations have revealed that the surface of Phobos is loaded with Martian material excavated during innumerable small meteorite impacts that have occurred randomly over the surface of Mars. "Particularly convenient for the Martian Moons eXploration mission, which will target Phobos for sample return, is that the moon's close orbit to Mars means that excavated Martian material can reach Phobos without a strong shocked excavation event, which would melt the material *1," Hyodo explains. "In other words, traces of Martian life and biomarkers could be carried to Phobos without being destroyed."

The JAXA MMX mission is scheduled to be launched in 2024 JFY *2. The MMX spacecraft aims to land on Phobos and collect a total of 10g or more of surface material samples from at least two different locations. (For the Hayabusa2 mission, the target prior to launch was 0.1g, so the MMX project is aiming for a 100 times larger sample.)

Following Hayabusa2, the primary goal of the MMX project is to acquire primordial material of the Solar System with a sample returned from a small celestial body. If Phobos originates from a D-type asteroid captured by Mars's gravity (observational data supporting this shows that the moon surface resembles that of a D-type asteroid), it is expected that the mission will collect primordial material such as organic matter, which are thought to be abundant on D-type asteroids. Alternatively, if Phobos was formed from fragments of a giant impact with ancient Mars (a large basin in the Martian northern hemisphere could be evidence for this occurring), Phobos was formed from a mixture of ancient Mars material and that of the colliding celestial object. The sample returned from Phobos in this case would mean the acquisition of ancient Martian material.

Regardless of the origin of Phobos, surface material from Mars has been deposited on the Phobos surface, after the Martian surface was excavated in the previously mentioned multitude of impacts from small meteorites. Since the MMX spacecraft is scheduled to return to Earth in 2029, the sample return from the Martian sphere carried by MMX is expected to be earlier than that from MSR. That is, JAXA is aiming with MMX for the world's first sample return of a variety of Martian surface material that potentially could contain traces of Martian life and biomarkers, as well as material from the Martian moon that relates to the origin of Phobos.

Dr. HYODO Ryuki and Professor USUI Tomohiro of the JAXA Institute of Space and Astronautical Science (ISAS), with the help of input from members of the MSR and MMX science teams, summarized and compared the possibilities for the exploration of life in the Martian sphere that can be achieved with MSR and MMX. This perspective piece was published by Science Magazine.

"While MSR is limited to exploration of the Jezero crater, the detailed examination has the potential to discover even present-day life if it is exists. On the other hand, traces of ancient fossilized microorganisms and biomarkers, dead remains of recent life, and possible DNA fragments could be found in the variety of Martian materials on Phobos delivered from over the entire surface of Mars and returned by MMX *2," Hyodo explains.

The results from this research will not affect the planetary protection classification of the MMX mission*3. Even if microorganisms were present on the surface of Mars, sterilization via the collision or radiation will have occurred. The probability of a living microorganism in the Martian moon samples returned to Earth by the MMX project remains less than one million to one, as previously estimated. "Such organisms may therefore exist as "safe" remains, where "safe" is not synonymous with "boring" or "valueless" but retains a high scientific value," Hyodo adds. Furthermore, latest research has suggested that the expected quantity of Mars sample on the surface of Phobos is 10 - 100 times greater than the conventional estimates*4.

With the significance of the two MSR and MMX missions clear, the flagship missions are collaborating to get a hint to the answer of the question: Is there anyone beyond the Earth? "In the 2020s, Martian life explorations of multiple space agencies are entering a new era and JAXA's MMX mission has an important role to play," Hyodo concludes. 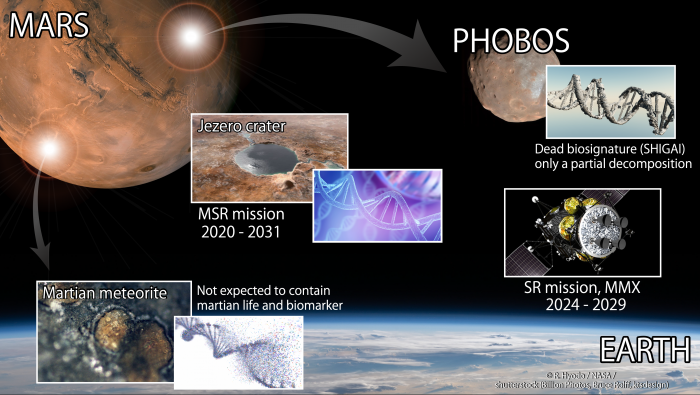 Schematic illustration of the transport of Martian material. Innumerable small meteorite impacts occur at random locations over Mars, digging up Martian surface material. As the Martian moon, Phobos, orbits close to the planet, material can be ejecting and transported from Mars to Phobos without the need for a large impact that would melt the material. This may mean that traces of ancient fossilized microorganisms and biomarkers, and/or dead remains and DNA fragments of Martian life that existed until recently have accumulated on Phobos. Evacuated Martian material can in rare occasions be ejected and reach the Earth, becoming a Martian meteorite. However, a large impact with Mars is needed to eject a meteorite capable of reaching the Earth. Martian meteorites therefore do not contain traces of Martian life (all found on Earth are actually igneous rocks formed by the cooling and solidification of magma).

*1 The amount of Martian surface material that would have been transported to the second moon of Mars, Deimos, is about 20 times less than that of Phobos due to the more distant orbit of Deimos.