MIDOOKA Takuya / Dept. of Astronomy, The University of Tokyo
Dept. of Space Astronomy and Astrophysics, ISAS

Unravelling the physical environment around the supermassive black hole at the center of a galaxy is one of the goals of modern astronomy. The brightly shining core of a galaxy is called the active galactic nucleus. X-ray observations are essential to elucidate the physical environment around the central black hole of an active galactic nucleus, as X-ray emission is particularly dominant in this region.

In this study, an active galactic nucleus NGC 5548 was studied using broadband X-ray spectra acquired by three X-ray astronomy satellites. Previous studies have used complex models to explain the X-ray spectral variability of NGC 5548, but correlations were found between parameters that could not be correlated physically. We considered this correlation to be 'parameter degeneracy' due to a model setup that included more parameters than necessary, and attempted to construct a simpler model. As a result, we succeeded in explaining the apparently complex X-ray spectral variability with a simple model of a clumpy object with a double structure crossing the line of sight.

The active galactic nucleus is the brightly shining central region of a galaxy. The large energy generated by the fall of matter into the supermassive black hole*1 at its center is converted into X-rays and shines brightly. Simulating the environment around the black hole, we can theoretically predict what kind of X-ray spectrum*2 will be obtained. By comparing the model spectrum obtained in this way with the observed spectrum and optimizing the model parameters so that they match, it is possible to constrain the environment near the black hole where X-rays are emitted. This is one of the most standard analysis methods in the astronomical community. However, since it is up to each researcher to determine the physical model to use for optimization, different physical models can often explain the same observed spectrum.

It is known that an accretion disk*3, corona*4, and multiple absorbers exist around the central black hole of an active galactic nucleus. On the other hand, various models have been proposed for the geometric structure and dynamical state of the corona and absorbers. Since all models can explain the observed spectra, an additional constraint, other than a fit with the observed spectra, is necessary to judge whether a model is suitable or not.

We studied NGC 5548, an active galactic nucleus, using archival data*5 acquired by three X-ray astronomy satellites. A previous study applied a model assuming two independent partial absorbers with different covering fractions to explain the complex X-ray spectral variation and reported a correlation between one of the covering fractions and the photon index*6 of the power-law continuum. However, it is not straightforward to physically understand that the photon index derived from the X-ray emission mechanism correlates with the covering fraction of absorbers far away from the corona.

Therefore, we considered this correlation to be "parameter degeneracy" caused by a model setting that included more parameters than necessary, and attempted to construct a simple spectral model. Figure 1 shows a schematic of our proposed model. As a result, we succeeded in explaining the X-ray spectral variation over 16 years without unphysical parameter correlations using a simple model in which clumpy absorbers with double structures (W1, W2 in Fig.1) partially block the line of sight and the percentage of the X-ray source covered by the clumpy absorbers change.

By examining the validity of the obtained physical parameters, we succeeded in constructing a more realistic physical model of the environment near a supermassive black hole beyond the spectral analysis. The XRISM satellite*7 is planned to obtain ultra-precise spectroscopic data in the future, and we expect that applying our proposed model to the XRISM data will confirm the consistency of our current physical picture and lead to a more realistic understanding of the physical environment. 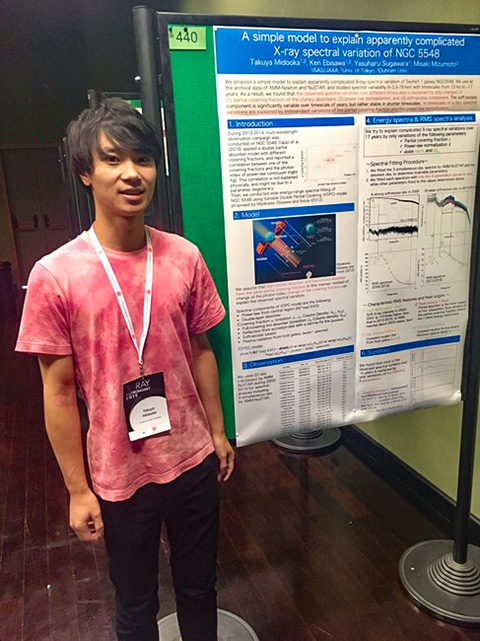