On Friday October 5th, JAXA and the Netherlands Institute for Space Research (SRON) confirmed their intention to collaborate in space science and exploration. With the Dutch minister of Education, Culture and Science Ingrid van Engelshoven and Netherlands Ambassador to Japan Aart Jacobi present, JAXA Vice President Hitoshi Kuninaka and SRON Director Rens Waters signed the joint statement at Embassy of the Kingdom of the Netherlands in Tokyo.

Both agencies have confirmed the importance of continuing and strengthening collaborative relationship in the future science missions such as SPICA, XRISM, and Athena through jointly considering; potential cooperation on the hardware, proposal and design of missions for future implementation, and development of critical technology for future missions.

JAXA and SRON have developed the relationship over a long time in space science. Releasing this statement will enhance and accelerate the cooperation. From the dawn of X-ray astronomy, the Netherlands and Japan shared a long history of cooperation. Cooperating in a wide range of field in space science will bring about fruitful scientific results. 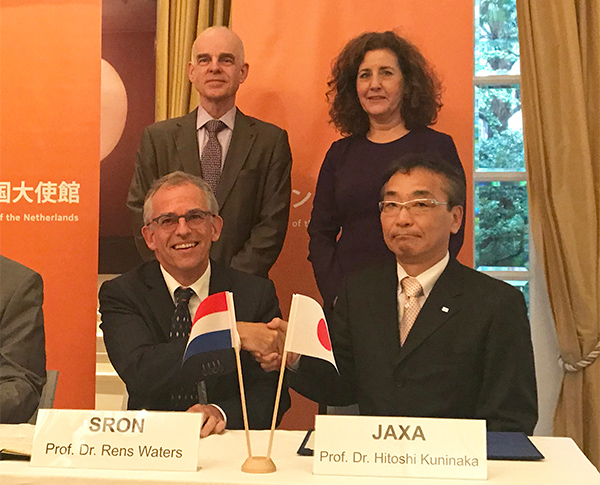 • SRON Netherlands Institute for Space Research (hereinafter referred to as SRON), and the Japan Aerospace Exploration Agency (hereinafter referred to as ISAS/JAXA) (referred to collectively as the 'Parties' or individually as a 'Party') agreed on October 28th, 2009 by the framework agency agreement called "Agreement between Institute of space and astronautical science of Japan Aerospace exploration agency and Netherlands Institute for Space Research on Cooperation in the field of space research for peaceful purposes", hereinafter "Framework Agreement" to cooperate with the purpose to strengthen their common research in astrophysics for peaceful purposes.

• This resulted in an intense collaboration of SRON and ISAS/JAXA with an emphasis on the high-energy domain (X-rays) and the low-energy domain (IR and submm), hereinafter the "Field".

• The future of this Field depends critically on strong collaborations between international partners. With a number of upcoming missions, SRON and ISAS/JAXA wish to confirm and further specify their partnership in this Field and agree that they wish to collaborate to strengthen knowledge in the Field by:

• Parties wish to lay down their intentions to collaborate in the certain areas in this joint statement, hereinafter "Statement"

Parties have expressed the wish to collaborate on the following three areas for collaboration which are:

1. Hardware collaboration: SRON , as part of the European (ESA) contribution to the X-Ray Imaging and Spectroscopy Mission (XRISM), which will be agreed between ESA and JAXA in a separate agreement, makes effort to coordinate the delivery of the filter wheel for the Resolve instrument on XRISM. In addition, SRON participates and contributes to the related scientific preparation.

Similarly, JAXA and SRON make effort to cooperate, in the context of the collaboration between JAXA and ESA, with the aim of realizing the X-ray Integral Field Unit (X-IFU) on the Athena mission which has been selected by ESA for a launch in 2030/2031.

2. Study of proposed missions: SRON and ISAS/JAXA collaborate during the phase A of the SPICA mission, a joint effort between ESA and JAXA as part of the ESA's 5th call for medium class missions with an anticipated launch date in the early 2030s. Other future opportunities could be considered as well (e.g. superDIOS, LiteBird, ..)

3. Development of critical technology: SRON and ISAS/JAXA agree to study collaboration in the development of the next generation hardware in these fields at a level which is appropriate for the state of the field (e.g. relevant detector technology). This collaboration may include the exchange of knowledge or the exchange of hardware to evaluate its performance by both parties.

Article 2 Collaboration:
To review the status of this collaboration at appropriate times (once per two years) discussions (exchange of information, data, software and ...) between representatives of SRON and ISAS/JAXA will be initiated, alternating in Japan and in the Netherlands.

The exchange of personnel is a part of this cooperation. In order to facilitate such visits, Parties have the intention that they cooperate in good faith to arrange formalities such as working permits for the visiting personnel of the other Party where needed.

While collaborating on the specified areas, both Parties are responsible for their own activities and carry these out at their own risk.

Whereas this Statement identifies the areas where Parties expect to collaborate, this does not limit any of the parties to be engaged with other partners in the same field.

In witness hereof this Statement has been signed on 5 October 2018 at the Dutch Embassy in Tokyo as noted below: