During their meeting, both leaders acknowledged their extensive cooperation across all mission areas, including on the International Space Station. They expressed their desire to expand their agencies' scientific and technological cooperation to realize sustainable exploration on the lunar surface and in the lunar vicinity leading to exploration of Mars. Dr. Yamakawa and Mr. Bridenstine signed a joint statement of intent outlining these goals. 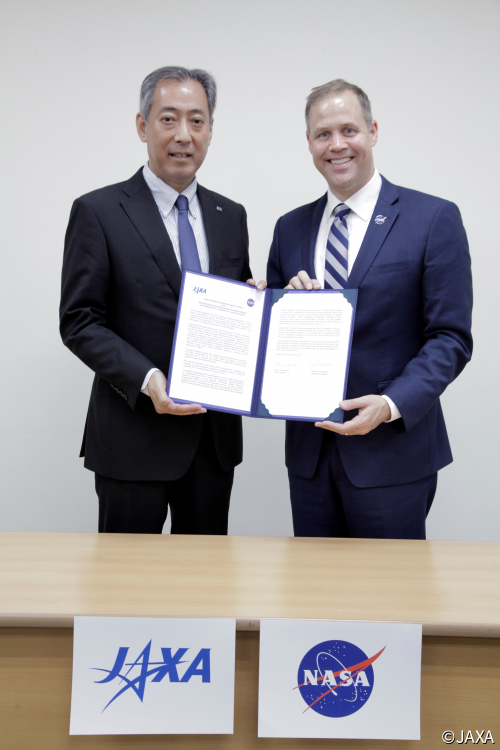 During their September 24, 2019, meeting at JAXA Headquarters in Tokyo, NASA Administrator James Bridenstine and JAXA President Hiroshi Yamakawa welcomed the ongoing engagement between their agencies to realize JAXA's participation in NASA's Artemis program and vision for the participation of Japanese astronauts in lunar exploration.

They noted that these efforts build on the long history of strong cooperation between their two agencies on the International Space Station and across all mission areas, as well as the May 2019 shared view of President Donald Trump and Prime Minister Shinzo Abe to accelerate discussions on cooperation regarding lunar exploration and affirmed their joint commitment for NASA and JAXA to collaborate in lunar exploration with a view toward Mars. Specifically, both agencies' leaders expressed their desire to expand the scientific and technological cooperation between NASA and JAXA to advance human lunar surface activities, leading to eventual human exploration of Mars.

The agency leaders shared their intention to seek support and commitment from their stakeholders in the United States and Japan to document proposals and to conclude the necessary arrangements between their respective agencies and governments.

The leaders highlighted NASA's participation in JAXA's SLIM (Smart Lander for Investigating the Moon) mission and discussions regarding NASA's potential participation in the planned JAXA-Indian Space Research Organisation (ISRO) Lunar Polar Exploration mission, as well as JAXA's sharing of acquired observational data from those missions to contribute to NASA's lunar exploration goals and objectives. Both leaders also welcomed JAXA's interest in providing science instruments to fly with NASA payloads on future CLPS (Commercial Lunar Payload Services) delivery missions and the planned upcoming launch of two JAXA-provided cubesats on NASA's Artemis 1 mission. These cooperative activities will contribute to their respective lunar science and exploration priorities, and both leaders acknowledged that the acquired data from these missions will contribute to NASA's plan to return humans to the Moon in 2024.

Additionally, President Yamakawa expressed JAXA's willingness to explore further cooperation to realize sustainable lunar surface activities, including through the potential provision of and collaboration on pressurized crew rovers, transportation vehicles to and from the lunar surface, and In-Situ Resource Utilization technology.

Acknowledging that both agencies are at a critical time for realizing their shared goals of advancing sustainable human presence at the Moon and Mars, the agency leaders committed to continue the close dialogue across their agencies at all levels in the tradition that has been the hallmark of NASA-JAXA collaboration.