Solar physicists have captured the first direct observational signatures of resonant absorption, thought to play an important role in solving the "coronal heating problem" which has defied explanation for over 70 years.

An international research team from Japan, the U.S.A., and Europe led by Drs. Joten Okamoto and Patrick Antolin combined high resolution observations from JAXA's Hinode mission and NASA's IRIS (Interface Region Imaging Spectrograph) mission, together with state-of-the-art numerical simulations and modeling from NAOJ's ATERUI supercomputer. In the combined data, they were able to detect and identify the observational signatures of resonant absorption.

Resonant absorption is a process where two different types of magnetically driven waves resonate, strengthening one of them. In particular this research looked at a type of magnetic waves known as Alfvénic waves which can propagate through a prominence (a filamentary structure of cool, dense gas floating in the corona). Here, for the first time, researchers were able to directly observe resonant absorption between transverse waves and torsional waves, leading to a turbulent flow which heats the prominence. Hinode observed the transverse motion and IRIS observed the torsional motion; these results would not have been possible without both satellites.

This new information can help explain how the solar corona reaches temperatures of 1,000,000 degrees Celsius; the so called "coronal heating problem." 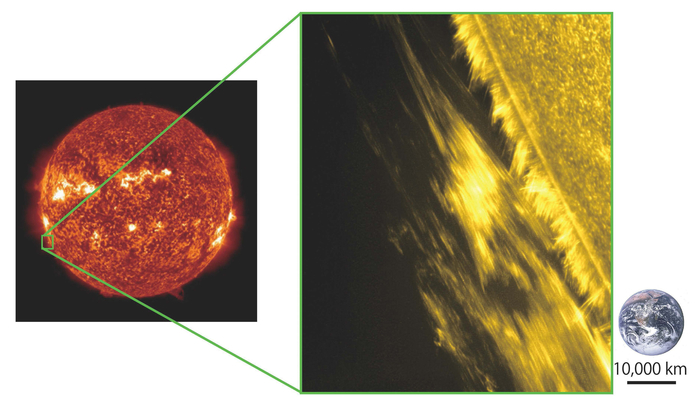 Figure1: (Left) For reference, an image of the entire Sun taken by SDO/AIA in extreme ultra-violet light (false color). (Right) An image of a solar prominence at the limb of the Sun taken by Hinode/SOT in visible light (Ca II H line, false color). As shown in the image, a prominence is composed of long, thin structures called threads. A scale model of the Earth is shown on the right for reference. © NASA/JAXA/NAOJ

The solar corona, the outer layer of the Sun's atmosphere, is composed of extreme high temperature gas, known as plasma, with temperatures reaching millions of degrees Celsius. As the outer layer of the Sun, the part farthest from the core where the nuclear reactions powering the Sun occur, it would logically be expected to be the coolest part of the Sun. But in fact, it is 200 times hotter than the photosphere, the layer beneath it. This contradiction, dubbed "the coronal heating problem" has puzzled astrophysicists ever since the temperature of the corona was first measured over 70 years ago.

Space-borne missions to observe the Sun and other technological advances have revealed that the magnetic field of the Sun plays an essential role in this riddle. But the key to solving the "coronal heating problem" is understanding how magnetic energy can be converted efficiently into heat in the corona. There have been two competing theories.

The first theory involves solar flares. Although each flare converts large amounts of magnetic energy into thermal energy, the overall frequency of solar flares is not high enough to account for all of the energy needed to heat and maintain the solar corona. To solve this discrepancy, the idea of "nanoflares" was introduced. It is thought that nanoflares, miniature solar flares, occur continuously throughout the corona and that the sum of their actions convert enough magnetic energy into heat to make up the difference. Unfortunately, such nanoflares have yet to be detected.

The second hypothesis is based on magnetically driven waves. Thanks to space missions such as the Japanese "Hinode" mission (launched in 2006), we now know that the solar atmosphere is permeated with "Alfvénic" waves. These magnetically driven waves can carry significant amounts of energy along the magnetic field lines, enough energy in fact to heat and maintain the corona. But for this theory to work, there needs to be a mechanism through which this energy can be converted into heat.

To look for this conversion mechanism, the research team combined data from two state-of-the-art missions: Hinode and the IRIS imaging and spectroscopic satellite (the newest NASA solar mission, launched in 2013).

Hinode's very high spatial and temporal resolution allowed researchers to detect small motions in the 2-dimensional plane of the image (up/down and left/right). To understand the complete 3-dimensional phenomenon, researchers used IRIS to measure the Doppler velocity (i.e. velocity along the line of sight, in-to/out-of the picture). The IRIS spectral data also provided vital information about the temperature of the prominence.

These different instruments allow the satellites to detect different varieties of Alfvénic waves: Hinode can detect transverse waves while IRIS can detect torsional waves. Comparing the two data sets shows that these two types of waves are indeed synchronized, and that at the same time there is a temperature increase in the prominence from 10,000 degrees to more than 100,000 degrees. This is the first time that such a close relationship has been established between Alfvénic waves and prominence heating.

But the waves are not synchronized in the way scientists expected. Think of moving a spoon back-and-forth in a cup of coffee: the half-circular torsional flows around the edges of the spoon appear instantly as the spoon moves. But in the case of the prominence threads, the torsional motion is half-a-beat out of sync with the transverse motion driving it: there is a delay between the maximum speed of the transverse motions and the maximum speed of the torsional motion (see Figure 2), like the delay between the motion of the hips of a dancer in a long skirt and the motions of the skirt hem.

To understand this unexpected pattern the team used NAOJ's ATERUI supercomputer to conduct 3D numerical simulations of an oscillating prominence thread. Of the theoretical models they tested, one involving resonant absorption provides the best match to the observed data. In this model, transverse waves resonate with torsional waves, strengthening the torsional waves; similar to how a child on a swing can add energy to the swing, causing it to swing higher and faster, by moving his body in time with the motion. The simulations show that this resonance occurs within a specific layer of the prominence thread close to its surface (see Figure 3). When this happens, a half-circular torsional flow around the boundary is generated and amplified. This is known as the resonant flow. Because of its location close to the boundary, the maximum speed of this flow is delayed by half-a-beat from the maximum speed of the transverse motion, just like the pattern actually observed (see Figure 2).

The simulations further reveal that this resonant flow along the surface of a thread can become turbulent. The appearance of turbulence is of great importance since it is effective at converting wave energy into heat energy. Another important effect of this turbulence is to enlarge the resonant flow predicted in the models to the size actually observed.

This model can explain the main features of the observations as the results of a two-step process. First resonant absorption transfers energy to the torsional motions, producing a resonant flow along the surface of the prominence thread. Then turbulence in this strengthened resonant flow converts the energy into heat (see Figure 2).

This work shows how the power of multiple satellites, such as Hinode and IRIS, can be combined to investigate long-standing astrophysical problems and will serve as an example for other research looking for similar heating in other solar observations.

These results were published in The Astrophysical Journal, Vol 809 in August, 2015. 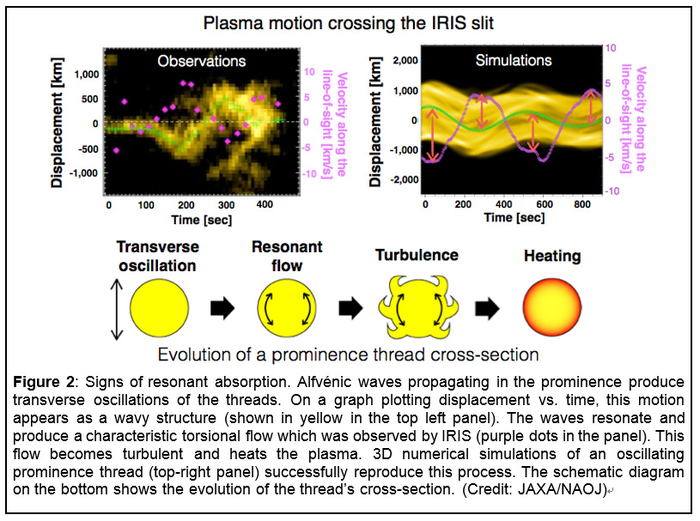 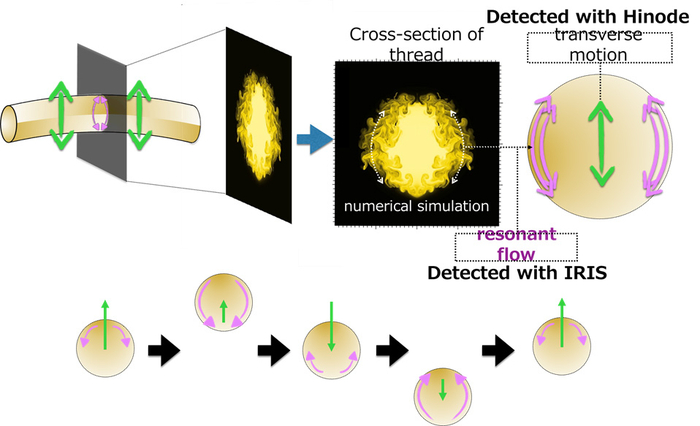