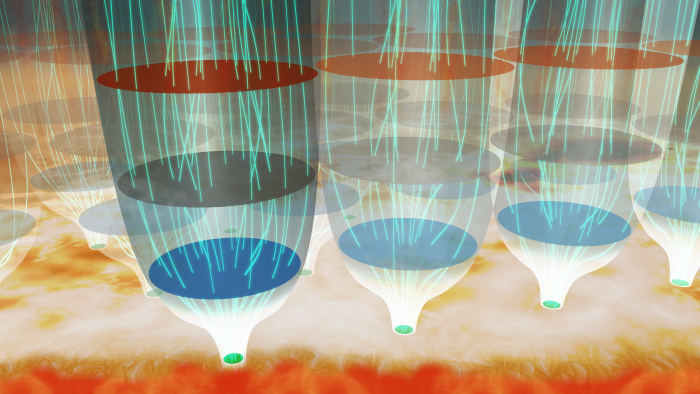 Fig. 1: Measuring the magnetic field strength at four different heights by using data from the CLASP2 and Hinode allowed mapping of the spread of magnetic field lines in the plage chromosphere (Credit: NAOJ).

For the first time, an international research team has revealed the magnetic structure from the solar surface to the base of the corona, combining observations from the sounding rocket experiment, CLASP2, with that of the Hinode satellite. The CLASP2 instrument was developed through the joint efforts of Japan, the US, and Europe and was launched with the NASA sounding rocket on April 11, 2019. For 6.5 min, CLASP2 succeeded in observing the polarization in the ultraviolet (UV) originating from the solar chromosphere. At the same time, Hinode, which has been operated by ISAS/JAXA under international and domestic collaboration, captured the magnetic field distributed on the solar surface with high accuracy. This unprecedented duel observation revealed that confined flux tubes scattered on the solar surface rapidly expanded and merged with one another (Fig. 1). This study provides new insight into solar magnetic fields and opens up a new diagnostic window for chromospheric magnetic fields.

On 19 February, this result appeared in "Science Advances," a peer-reviewed journal in the Science (Magazine) family published by American Association for the Advancement of Science.

The outer solar atmosphere, the chromosphere (10,000 K), and the corona (1 MK), are home to extremely high temperatures compared with the solar surface (6,000 K), and the mechanism to generate such high-temperature atmospheres is not yet understood. Moreover, the plasma density of the chromosphere is higher than that of the corona, suggesting that much more energy is required to maintain the chromosphere than the corona. These are known as "chromosphere and coronal heating problem." Various observational and theoretical investigations have been conducted to address this problem, and the chromosphere, which is the interface between the solar surface and the corona, has been known to play a critical role. However, the magnetic field in the chromosphere, which drives the fundamental processes for heating such as dynamical plasma motions and transfer of energy to the upper layers, has not been extensively measured, and the lack of information has prohibited solar physicists from understanding the issue.

New instruments aimed at the measurement of chromospheric magnetic fields are being actively developed worldwide. Motivated by recent theoretical investigations on the magnetic sensitivity of the solar ultraviolet (UV) spectrum, the international CLASP and CLASP2 team focused on the polarization in the strongest UV spectral lines: hydrogen Lyman-alpha and Mg II h & k. UV polarization has been unexplored for many years since the measurement requires observation from space and the technology needed to precisely measure the polarization in UV light was not yet mature. The team has overcome these difficulties and conducted the sounding rocket experiments CLASP (for the Lyman-alpha line) in 2015 and CLASP2 (for the Mg II h & k region) in 2019. 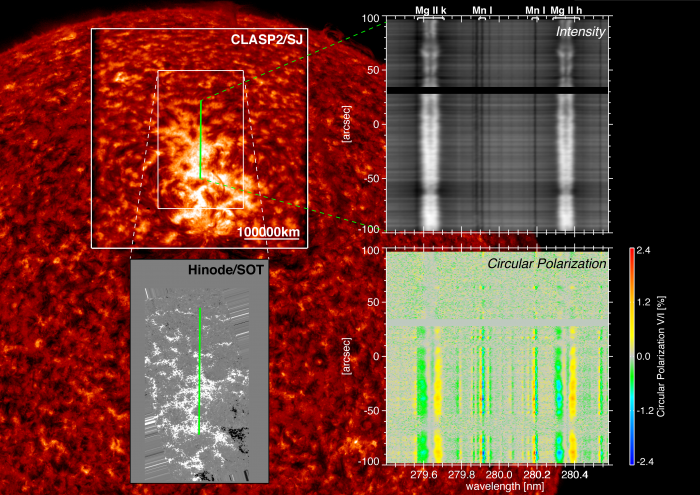 Fig. 2: Summary of data used in this study. CLASP2 obtained the polarization spectra (right two panels) at the location of the slit shown by the green solid line. The solar chromosphere around the CLASP2 slit was monitored by the Slit-Jaw monitor system (SJ) aboard CLASP2 (upper left panel). The detailed magnetic field information on the solar surface was recorded by the Solar Optical Telescope aboard the Hinode satellite (lower left panel), where the white and black show the strong magnetic fields with N- and S- polarities. In the background is the full disk image of the solar chromosphere taken by the Solar Dynamic Observatory (SDO) satellite. (Credit: NAOJ, IAC, NASA/MSFC, IAS)

The CLASP2 international research team carried out the investigation published in Science Advances. The investigation has been coordinated by Ryohko Ishikawa (National Astronomical Observatory of Japan, NAOJ) and Javier Trujillo Bueno (Instituto de Astrofísica de Canarias, IAC). During the observing time of 6.5 min, CLASP2 observed the active region for 2.5 min and succeeded in obtaining the polarization spectra around the Mg II lines (wavelength 280 nm) for the first time (Fig. 2). Interestingly, in addition to the Mg II lines, which are the primary spectral lines targeted by CLASP2 (indicated as Mg II k and Mg II h in Fig. 2), two Mn I lines also showed clear circular polarization signals. While the Mg II lines originate from the middle to the top of the chromosphere, the Mn I lines are emitted from the lower chromosphere. By exploiting the polarization signals in these spectral lines, magnetic field measurements at different heights in the chromosphere (i.e., bottom, middle, and top of the chromosphere) are possible. Moreover, CLASP2 succeeded in coordinated observation with the Hinode satellite, which precisely measured the magnetic field on the solar surface (lower left panel of Fig. 2). 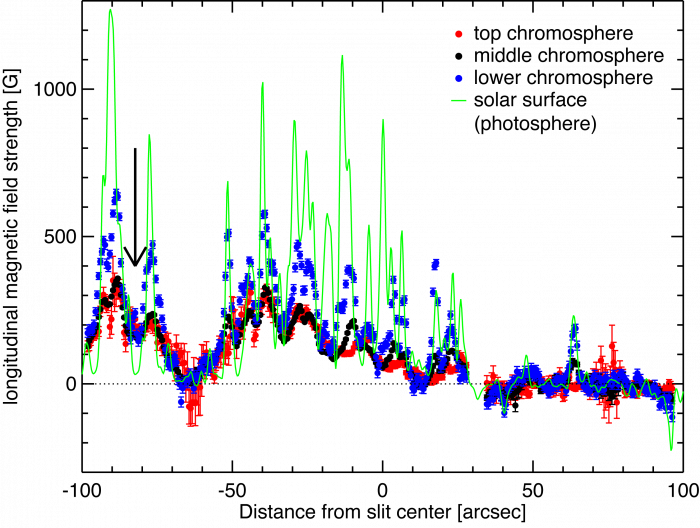 Fig. 3: Mapping of the magnetic fields from the solar surface to the base of the corona (top chromosphere), along the CLASP2 slit (green solid line in Fig. 2) at four different heights of the solar atmosphere. (Credit: NAOJ, IAC, NASA/MSFC, IAS)

Moreover, the team found a high correlation between the energy density (the product of electron density and temperature), which was inferred from the intensity (upper right panel of Fig. 2) and the magnetic fields at the top of the chromosphere (red circles in Fig. 3). This high correlation provides empirical evidence that chromospheric heating is of magnetic origin and that chromospheric magnetic fields, rather than those on the solar surface, are indispensable for understanding the heating mechanism. It is anticipated that the inferred picture of magnetic flux tubes connecting from the solar surface to the top of the chromosphere will allow deciphering how the magnetic field couples the different atmospheric layers, i.e., investigation of how energy is transferred between different layers of the Sun. 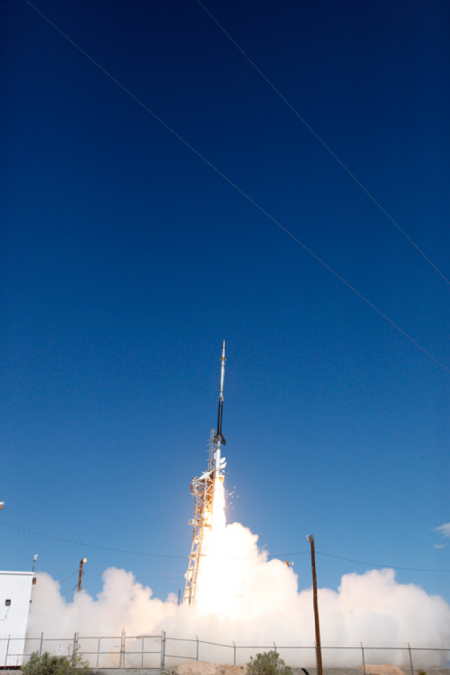 The CLASP2 instrument was launched by a NASA sounding rocket in the White Sands Dessert, New Mexico (Fig. 4). The instrument payload landed on the White Sands Desert using a parachute and was transported back to NASA/MSFC. The CLASP2 team plans to fly the instrument again as CLASP2.1. In CLASP2, the spectrograph slit was fixed at one location, and information about the magnetic fields along a single line on the Sun was obtained. In CLASP2.1, the team aims at obtaining the 3D (spatial 2D & height) map of the magnetic fields from the solar surface to the top of the chromosphere by moving the slit. Sounding rocket experiment provides a unique chance for researchers with a scientific idea to plan and develop the instrument, and execute this in a prompt and timely manner. Hence it is particularly valuable for pioneering research and technology demonstrations that may evolve into satellite mission concepts in the future. It also provides an efficient opportunity to educate young researchers and graduate students who will lead instruments in future satellite missions. Solar physicists all over the world likewise are pursuing chromospheric magnetic field measurements with upcoming new instruments such as the SUNRISE-3 balloon project, the recently-completed DKI Solar Telescope in Hawaii and the future European Solar Telescope (EST) in Canary Islands.

Finally, it is critically important to simultaneously observe the heating process in greater detail. The new solar satellite mission, Solar-C Extreme Ultraviolet High-Throughput Spectroscopic Telescope (EUVST), which is being developed by Japan in close collaboration with the US and European partners, will be able to perform spectroscopic observations of the chromosphere to the corona with high spatial and temporal resolutions (though without polarization diagnostics). Solar physicists are excited to tackle the 'chromospheric and coronal heating problem' by exploiting various observational facilities and diagnostic methods.

CLASP (Chromospheric Lyman-Alpha Spectro-Polarimeter) :
Preceding sounding rocket experiment of CLASP2. It was launched in April 2015 and performed polarimetric observations of the hydrogen Lyman-α line at a wavelength of 122 nm originating from the solar chromosphere, demonstrating the feasibility of UV spectropolarimetry. The instrument detected the theoretically predicted scattering polarization and obtained evidence of the Hanle effect (modification of the scattering polarization due to the presence of magnetic fields in the upper chromosphere) for the first time. Moreover, theoretical modeling of the CLASP data revealed that the chromosphere-corona transition region is more corrugated than previously thought. However, CLASP did not measure the circular polarization induced by the Zeeman effect, a useful signal to help determine the full magnetic field vector. https://hinode.nao.ac.jp/en/news/results/170518claspsp/

CLASP2 (Chromospheric LAyer Spectro-Polarimeter) :
The development of the CLASP2 instrument was spearheaded by Japan with the US and France, with instrumental specifications based on theoretical investigations led by Spain. After the launch of the CLASP, the NAOJ team brought back the instrument to Japan and refurnished to measure the polarization around the Mg II lines at 280 nm. The development and testing were performed using the facility of the Advanced Technology Center at NAOJ and shipped to the USA. Finally, on April 11, 2019, it was launched from the White Sands Missile Range in New Mexico, USA.
https://hinode.nao.ac.jp/en/news/topics/clasp2-launch-en-20190422/

CLASP2 is an international partnership between NASA/MSFC, NAOJ, JAXA, IAC, and IAS; additional partners include ASCR, IRSOL, LMSAL, and the University of Oslo.

The Japanese contribution to CLASP2 was supported by:

The US contribution to CLASP2 was supported by:

The contribution of Spain to CLASP2 was supported by:

The contribution of France to CLASP2 was supported by:

Our Sun is going through a highly energetic phase: A look at the 25th solar activity cycle