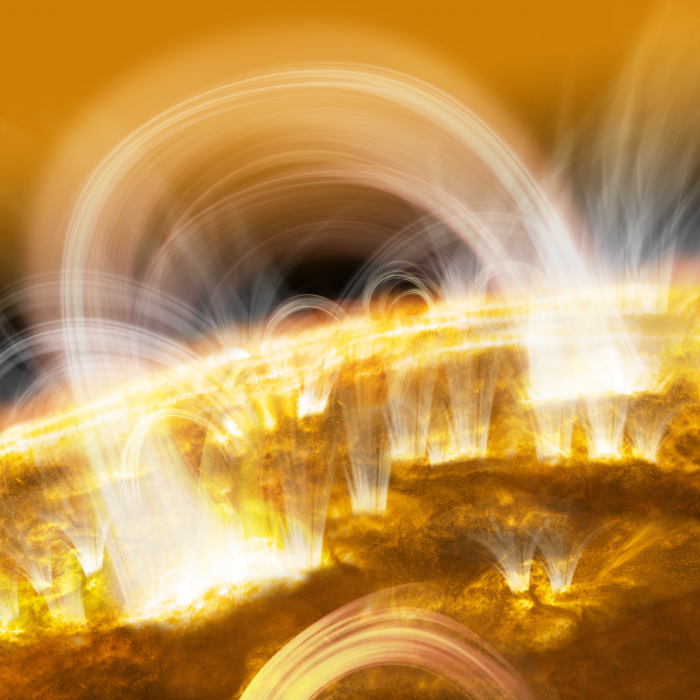 An international research team led by Dr. Shin-nosuke Ishikawa, (ISAS/JAXA) succeeded in detecting the subtle signs of nanoflares (tiny flares) in a region of the solar corona where no discernible flare activity was taking place. The finding was made by a combination of hard X-ray data from FOXSI (Focusing Optics X-ray Solar Imager) sounding rocket experiment and data from Hinode solar observatory. The frequent occurrence of nanoflares has been regarded as a promising agent for maintaining the solar corona at a high temperature of several million Kelvin. The result from the research group is expected to put strong constraints to theories accounting for the coronal heating.

The results are to be published in Nature Astronomy, 9 October 2017 issue.

Above the visible surface of the Sun, there extends hot and tenuous atmosphere called the corona. Why the corona is so hot (a few million Kelvin) above the cooler surface of the Sun (5,800 Kelvin), and how the corona is heated up to that temperature still remain unanswered. The apparent controversy of the higher temperature at a location in the solar atmosphere farther from the heat source has been known as the coronal heating problem. The problem has been a decades-long mystery in the field of solar physics.

There are several hypotheses for possible mechanisms of coronal heating. One of them assumes heating by the frequent occurrence of very tiny flares, nanoflares. This hypothesis has been regarded as promising for explaining the hot corona. With the nanoflare hypothesis, numerical studies have suggested the creation of very hot plasmas exceeding ten-million Kelvin which is by far hotter than the typical temperature of the corona.

However, so far there was no observation that conclusively showed the presence of such very hot plasmas. 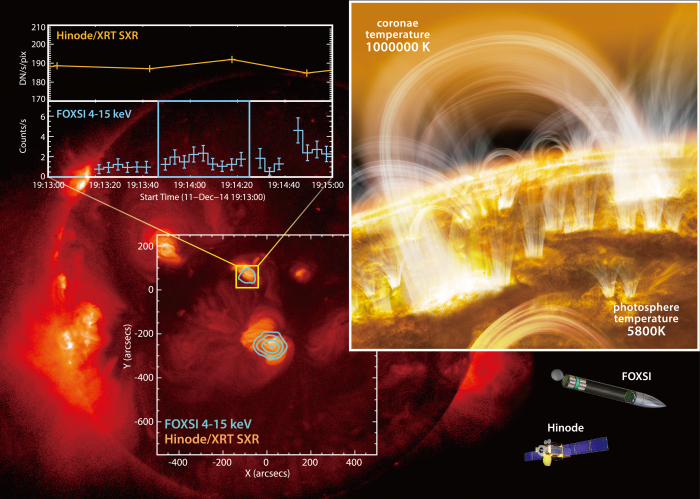 FOXSI was realized under the international collaboration of state-of-the-art technologies; the X-ray optics for FOXSI was developed by U.S. colleagues of the team while Japanese members developed semi-conductor X-ray imaging detector of low-noise and fine pixel pitch. Thanks to the collaboration, FOXSI was able to observe weak X-ray signals from very hot (exceeded 10-million Kelvin) plasmas in the corona, with unprecedentedly-high sensitivity.

The X-ray telescope (XRT) aboard Hinode is sensitive to soft (several million Kelvin) X-ray emissions. Therefore, Combining observations from these two instruments makes it possible to investigate in detail temperature structure of the region observed.

By analyzing data from FOXSI and Hinode XRT, the research team was able to estimate, with high accuracy, the temperature structure of the corona for the region observed. It became clear that, albeit small in its amount, there certainly existed very hot plasmas. The hard X-ray emission detected by the FOXSI observation was emitted for a quiet solar active region which was not showing X-ray brightening nor flaring activity.

This result strongly suggests the occurrence of nanoflares even in a region without apparent flaring activities. The finding is expected to pose a strong constraint on theoretical models explaining coronal heating. The research group succeeded in, not only confirming the persistent presence of very hot plasmas in the solar corona but also demonstrating the power of high sensitivity and high spatial resolution X-ray observations of the corona.

Unfortunately, the duration of the observation with the FOXSI sounding rocket was only 6 minutes. One would argue that the result presented here is from only a single region in the corona.
"In order to reveal the mechanism of coronal heating with nanoflares, it is necessary to increase the number of regions to be observed as well as to conduct observations with a longer time span. We are keen to examine if nanoflares are general phenomena", said Dr. Ishikawa.

The group is now working towards possible future satellite missions to be realized in Japan, or in U.S. together with U.S. colleagues.