The images and videos were taken on August 22, 2017 at 1:57 JST with the X-Ray Telescope (XRT) aboard "Hinode" during its flight above the Pacific Ocean (off the west coast of the US) at an altitude of 680km. The silhouette of the new moon was approaching from the south west (the lower right side of the image) and passing across the solar disk toward the north east (the upper left side of the image) against the solar corona seen in X-rays. It was a partial eclipse, the maximum magnitude of which was 0.714. Since the flight speed of "Hinode" was very fast (27,000 km per hour), the duration of the partial eclipse was only about 15 minutes. 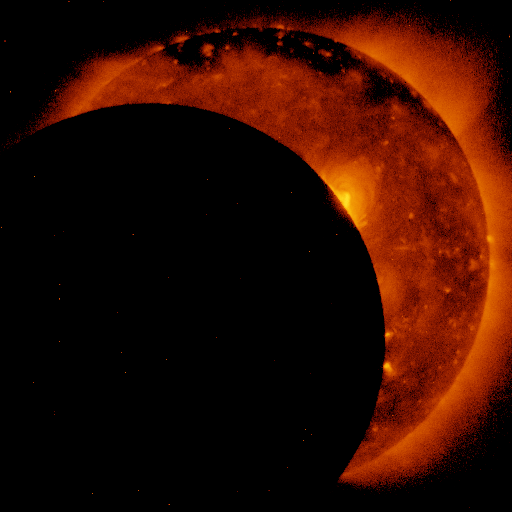 The total eclipse is a precious opportunity to deepen our understanding of the Sun. "Hinode" jointly observed the eclipse with ground observers. The scientific target of observation was to see the coronal structure in the polar region and the mechanism of jets which are frequently created there. Moreover, during the 90 minutes when the zone of totality crosses the continent of USA, "Hinode" took a series of X-ray coronal images collaborating on the project to produce the video of white light corona participated by many citizens (Eclipse Megamovie 2017, https://eclipsemega.movie). Electron densities can be measured by comparing the X-ray images and the white light images taken during the total eclipse. We would get a clue to understand the mechanism of polar jet creation and the dynamics of the coronal structure taking place in these 90 minutes. We hope the success of the eclipse observations will lead to more precise prediction of solar flare and solar storm occurrences that result to the geomagnetic storms, sometimes affecting electronic devices in the artificial satellites and on the ground.

Solar eclipse captured by "Hinode" | The Great American Eclipse on 21 August 2017: public release of images and videos taken by the "Hinode" satellite