Scientists have begun analyzing data about the solar corona captured by the FOXSI-3 sounding rocket experiment. This is the world's first solar corona data where each soft X-ray was captured with high contrast, and high resolution in position, time, and energy. While this alone is outstanding, by combining the data points astronomers can create unprecedented images and graphs.

The solar corona is a layer in the Sun's atmosphere. It is filled with hot plasmas at temperatures of more than 1 million degrees Celsius. The corona is a dynamic environment where various energy releases occur, the most famous being solar flares. The coronal plasmas ejected by a solar flare can sometimes reach the Earth and affect our environment and technology. Thus, the study of the Sun has important practical applications.

The corona emits most of its light as X-rays. But X-rays are absorbed by the Earth's atmosphere, so observations from space are required.

Noriyuki Narukage, NAOJ Assistant Professor, and Shin-nosuke Ishikawa, a researcher at Nagoya University, together with the scientists at Kavli IPMU / The University of Tokyo and Institute of Space and Astronautical Science / Japan Aerospace Exploration Agency (ISAS/JAXA), developed a high-speed soft X-ray camera and installed it on the sounding rocket FOXSI-3 which flew above the Earth's atmosphere for 6 minutes to observe the Sun. This camera was the first in the world to record individual solar soft X-rays with high contrast and high resolution in position, time, and energy.

Once spatial-, temporal-, and energy- information about individual photons is obtained, scientists can analyze these data in various ways. For example, by arranging all detected photons in 2-dimensional space, they can obtain a solar image through pointillism. Different analysis yields the temporal evolution and energy distribution of the X-rays.

This research is supported in part by JSPS KAKENHI Grants. The FOXSI-3 sounding rocket is funded by a NASA LCAS grant.

Figure 1. Focusing imaging spectroscopic data in soft X-rays obtained by the FOXSI-3 sounding rocket. The FOXSI-3 high-speed CMOS camera took a continuous exposure at 250 frames per second (4 ms exposure) for approximately 6 minutes. Panel (a) shows real FOXSI data. Each white dot in these images is an individual X-ray photon. The signal of each white dot is proportional to the energy of the X-ray photon. Hence, from these images, we can simultaneously obtain information about the position, timing, and energy of each X-ray photon. Using this information, we can construct a solar corona image (see Panel (b), which shows 1.5 million integrated X-ray photons detected over 2 minutes). We can also investigate the temporal evolution and spectrum of the X-ray photons, as shown in Panels (c) and (d), respectively. These plots cover the region of the black box in Panel (b). The gray bars in the plots show the 1-sigma error of photon statistics. (* The photon numbers in Figure 1 are the photon numbers detected by the detector. Hence, in order to convert these detected photon numbers to the photon numbers originally emitted from the Sun, the efficiency of the instrument should be considered.) (© FOXSI-3 team) 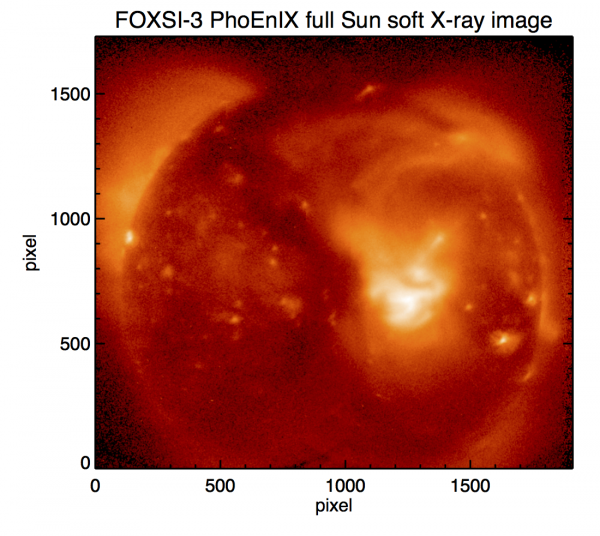 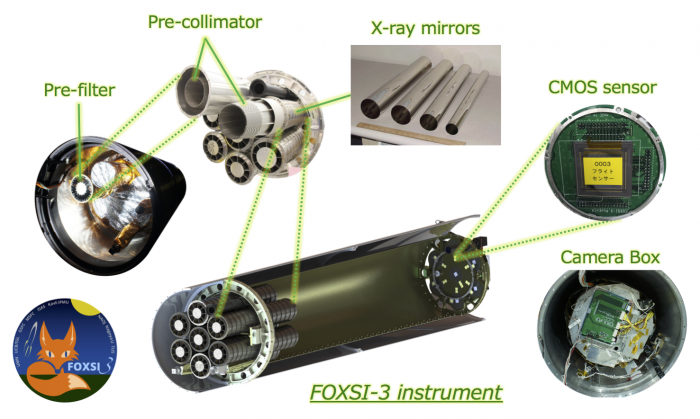