An international research team performed a new study on the Sun. The researchers analyzed the observational data taken over the past ten years by a fleet of solar-observing satellites including "Hinode" and "Solar Dynamics Observatory (SDO)" to derive properties of the Sun as a far distant star. The team focused on the light curves observed in a variety of wavelength ranges. When a sunspot group transits the solar disk, ultraviolet light emanating from the chromosphere is strongly correlated with the magnetic flux in the photosphere. The light curves of the photosphere and the corona have time lags, and the lengths of such time lags depend on the spatial extents of coronal magnetic loops. The light curves sensitive to the transition-region temperatures sometimes become darker because of the plasma heating due to sunspots.

Extension of this research may contribute to the science of identifying exoplanets. Suppose we understand the behaviors of light curves in different wavelengths during sunspots transit, researchers can estimate the radii and orbits of exoplanets by observing the host stars in multiple wavelengths. Additionally, because the stellar magnetic activity, as represented by flares and accompanying radiation, can affect the planets' circumstances, the research shown here may even help investigate the habitability (capability to support life) of exoplanets.

Solar flares are known to trigger magnetic storms in Geospace. The induced radiation and particles may result in harmful consequences on satellites and high- altitude airplanes' operation and cause errors with satellite systems such as GPS. It is widely accepted that solar flares represent a sudden release of magnetic energy stored in the corona above the sunspots. Flares occur not only on the Sun. Recently, massive flares (called "superflares") of solar-like stars were detected, and such superflares are estimated to release energies far exceeding the solar ones. Astronomers consider the link between the superflares and the starspots, in which magnetic fields are strongly concentrated. At some level, our Sun and distant Sun-like stars share common magnetic properties like spots and flares. Therefore, we may deepen our understanding of such common physical mechanisms through detailed investigations of the Sun and observations of stars. Magnetic activity of the Sun and stars influences the planets orbiting around them. In particular, strong ultraviolet radiation from a central star ionizes and strips away the planets' atmospheres. Thus, the measurement of ultraviolet radiation from distant stars is critical in investigating the habitability (capability to support life) of the planets.

To understand the stellar magnetic activity, we need to study both the stellar visible surface and their overlying atmospheres. Understanding the release and transport of magnetic energy and the effect of sunspot evolution on the chromosphere and corona will lead to a better comprehension of the mechanisms of flares. With current technology, we can conduct spatially resolved observations only on the closest star, the Sun. One approach is to study the Sun as a distant star and aggregate the light from the Sun as if it were emitted from a remote, point-like source. As a result, we can inform stellar observational data by utilizing solar data, leading to a better understanding of the stellar magnetic activity.

The international research team led by Shin Toriumi (ISAS/JAXA) investigated how disk-integrated sunlight in different wavelengths varies with time when a sunspot group transits the solar disk. Namely, the scientists treated the Sun as a point source to imitate distant stars and derived information that can be applied to stellar observations. They analyzed the solar data in different wavelengths, ranging from visible light to X-rays obtained by four spacecraft, including the solar-observing satellite "Hinode" and NASA's "Solar Dynamics Observatory (SDO)." "Hinode" was launched in 2006 and "SDO" in 2010, and both continue to monitor the Sun by taking images of the entire solar disk at regular intervals. Out of these large, decade-long data sets, the team choose periods for which a single, isolated group of sunspots marched across the disk, plotted the resulting light curves of different wavelengths, and investigated the causes of variations.

For the first time, the team looked into how the transit of individual sunspots and magnetic fields changed the light curves at different wavelengths. As a result, they found strong correlations between the ultraviolet radiation (which are sensitive to the chromosphere) and the photospheric magnetic flux.
They also noticed the time lags of the brightening and darkening between the photospheric and coronal light curves: The light curves of coronal lines were found to depend on the spatial extents of coronal loops. The occasional darkening of transition-region light curves were ascribed to the plasma heating associated with sunspot groups. 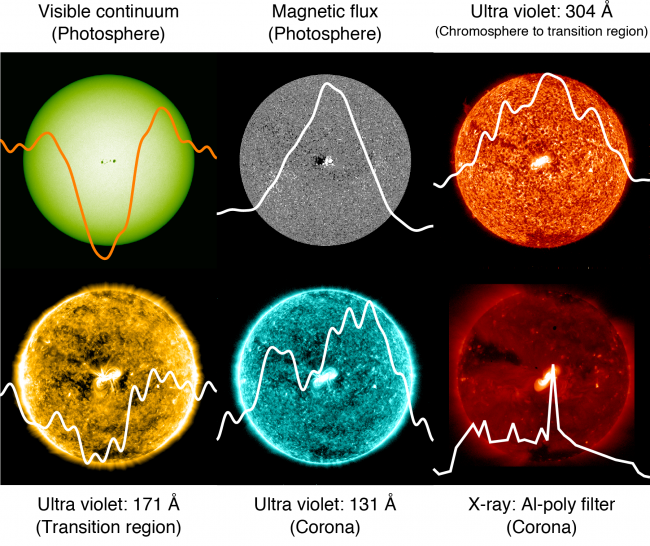 Figure 1. Light curves in different wavelengths for the case of a sunspot group (active region 12699) transiting across the solar disk. The curves are overlaid on the corresponding solar images when the sunspots located near the disk center. As the spot group crosses the solar disk, the visible light curve is dipped whereas the ultraviolet and X-rays sensitive to the chromosphere and corona are brightened. It was revealed that ultraviolet light curves are sensitive to transition- region temperatures are sometimes darkened. (Credit: ISAS/NAOJ)

Movie. A movie for Figure 1

Figure 1 shows the light curves in different wavelengths for the case of a sunspot group transiting the solar disk. These curves are overlaid on the corresponding solar images, chosen to be at the point in time when the sunspots are located near the central meridian. First, in the visible continuum that corresponds to the photosphere (top left), the sunspots are darker than the surroundings, resulting in a dip in the light curve as the spot group crosses the solar disk. The magnetic flux measured in the photosphere (top middle) attains its peak value when the spot group is around the disk center. The ultraviolet light curves that originate from the matter at chromospheric (top right) and coronal temperatures (bottom middle) are also peaked when the spot group is near the central meridian. The investigation finds that ultraviolet light curves (bottom left), sensitive to transition- region temperatures, are sometimes darkened. The transition region is the thin atmospheric layer located between the chromosphere and the corona. Whereas the coronal and chromospheric intensities are enhanced, the intermediate layer shows, interestingly, the opposite behavior.

Why does this occur? The team calculated the relative amount of plasma having different temperatures (a property called "emission measure"). It was found that the density of plasma at temperatures between 600,000 Kelvin (1.1 million degrees Fahrenheit) and 800,000 Kelvin (1.4 million degrees Fahrenheit), corresponding to the transition region, was reduced in the region surrounding the sunspots (about 40% of the visible solar hemisphere) (see Figure 2, left). Compared to the spotless quiescent case, the emission measure for the case of transiting sunspots showed that plasma at transition-region temperatures was decreased. In contrast, the emission measure of coronal temperatures (exceeding 1 million Kelvin or 1.8 million degrees Fahrenheit) was enhanced (Figure 2, right). From these data, the team concluded that the plasma around the sunspot region was heated to coronal temperatures, which caused darkening in ultraviolet lines that have a sensitivity to the cooler transition region.

Moreover, the research team revealed that the ultraviolet light curves that probe the chromosphere (Figure 1, top right) show good correlations with the photospheric magnetic flux (Figure 1, top middle). Additionally, time lags exist between the evolution of photospheric and coronal light curves, the lengths of which reflect the spatial extents of coronal loops. These results indicate that we may obtain information on starspots and magnetic fields on far distant stars by measuring light curves in multiple wavelengths, even though spatially resolved observations of these targets are not feasible.
Observations of starspots in wavelengths other than the visible light are less common. However, new ultraviolet telescopes, such as "ESCAPE" in the US and "WSO-UV" of Russia and Spain, are under development, and Japanese institutes will provide instruments to the latter missions. Astronomers expect the next- generation space telescopes to monitor the starspots on stars soon.

The results of this study may also contribute to the ability to find exoplanets. When a starspot transits the stellar surface, dips in the visible light curves are expected to occur. Because one technique used for searching for exoplanet candidates involves looking for dips in stellar light curves, on occasion transiting starspots are mistakenly recognized as exoplanets. If we have reliable knowledge of the effect of transiting spots on various wavelengths, we will estimate the parameters, such as the radii and orbits, of exoplanets more accurately. As in-depth investigations into the Sun proceed, a better understanding of the detailed mechanisms of atmospheric heating and flare eruptions is gained. Consequently, the next-generation solar-observing satellite "Solar-C (EUVST)," developed by Japan in close collaboration with the US and European partners, aims at observing the Sun at temperatures that probe the chromosphere, transition region, and corona as a single system. Solar-C (EUVST) surpasses the ability of the present "Hinode" spacecraft. With the new tool, wWe may further learn about the mechanisms that the solar atmosphere generates ultraviolet emissions.

(1) Sunspot
Sunspots are dark regions on the visible solar surface that represent strong magnetic fields. They result from magnetic structures that have emerged onto the surface from deep in the solar interior. Because magnetic fields suppress the convection and the heat transfer through the solar surface from below, the spots are cooler than the surroundings and appear darker in visible wavelengths. However, in ultraviolet and X-rays, the sunspot atmosphere contains magnetic loops, which are bright because the plasma is heated. Solar flares result from the release of built-up magnetic energy. Similarly to the Sun, many distant, cool stars close in size to the Sun are known to harbor dark spots. Observations of such solar-type stars indicate that massive flares on the stars ("superflares") can occur using starspots as an energy source.

(2) Solar atmospheres
Above the photosphere of the Sun (about 6,000 Kelvin), the chromosphere (about 10,000 Kelvin) extends up to an altitude of about 2,000 km. Above the 100 km- thick transition region is the corona (about 1 million Kelvin or higher). Because matter at different temperatures emits at different wavelengths of light, the photosphere is observed mainly in the visible part of the electromagnetic spectrum, whereas the corona is visible primarily in ultraviolet and X-rays.

(3) Solar-observing satellite "Hinode"
Launched in 2006, "Hinode" is Japan's third solar-observing satellite, developed and operated in collaboration with the US and European countries. It observes in detail the magnetic fields and plasma motions from the solar surface to the corona with its three telescopes on board. The X-ray telescope takes X-ray images of the whole solar disk twice a day as part of its synoptic program. Currently, its successor spacecraft "Solar-C (EUVST)" is under development with the target launch in the mid-2020s.

(4) Solar-observing satellite "SDO"
SDO is an abbreviation for NASA's "Solar Dynamics Observatory", launched in 2010. It is part of the NASA's Living With a Star program and aims at understanding how the variability of the Sun's magnetic field generates space weather and space climate. It monitors the whole solar disk in multiple wavelengths in visible and ultraviolet.