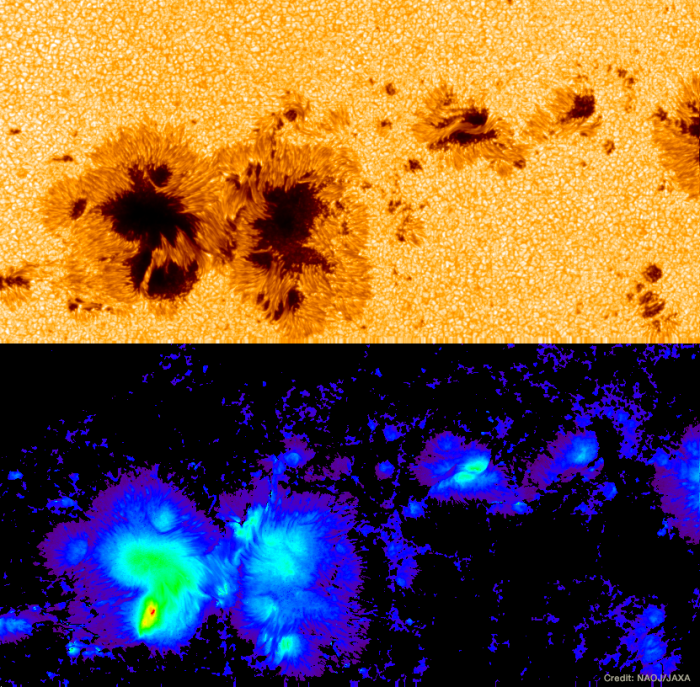 Astronomers at the National Astronomical Observatory of Japan (NAOJ) using the HINODE spacecraft observed the strongest magnetic field ever directly measured on the surface of the Sun. Analyzing data for 5 days around the appearance of this record breaking magnetic field, the astronomers determined that it was generated as a result of gas outflow from one sunspot pushing against another sunspot.

Magnetism plays a critical role in various solar phenomena such as flares, mass ejections, flux ropes, and coronal heating. Sunspots are areas of concentrated magnetic fields. A sunspot usually consists of a circular dark core (the umbra) with a vertical magnetic field and radially-elongated fine threads (the penumbra) with a horizontal field. The penumbra harbors an outward flow of gas along the horizontal threads. The darkness of the umbrae is generally correlated with the magnetic field strength. Hence, the strongest magnetic field in each sunspot is located in the umbra in most cases.

Joten Okamoto (Specially Appointed Assistant Professor at NAOJ) and Takashi Sakurai (Professor Emeritus of NAOJ) were analyzing data taken by the Solar Optical Telescope onboard HINODE, when they noticed the signature of strongly magnetized iron atoms in a sunspot (Figure 1). Surprisingly the data indicated a magnetic field strength of 6,250 gauss (*1). This is more than double the 3,000 gauss field found around most sunspots. Previously, magnetic fields this strong on the Sun had only been inferred indirectly. More surprisingly, the strongest field was not in the dark part of the umbra, as would be expected, but was actually located at a bright region between two umbrae.

HINODE continuously tracked the same sunspot with high spatial resolution for several days. This is impossible for ground-based telescopes because the Earth's rotation causes the Sun to set and night to fall on the observatories. These continuous data showed that the strong field was always located at the boundary between the bright region and the umbra, and that the horizontal gas flows along the direction of the magnetic fields over the bright region turned down into the Sun when they reached the strong-field area (Figure 2). This indicates that the bright region with the strong field is a penumbra belonging to the southern umbra (S-pole). The horizontal gas flows from the southern umbra compressed the fields near the other umbra (N-pole) and enhanced the field strength to more than 6,000 gauss. 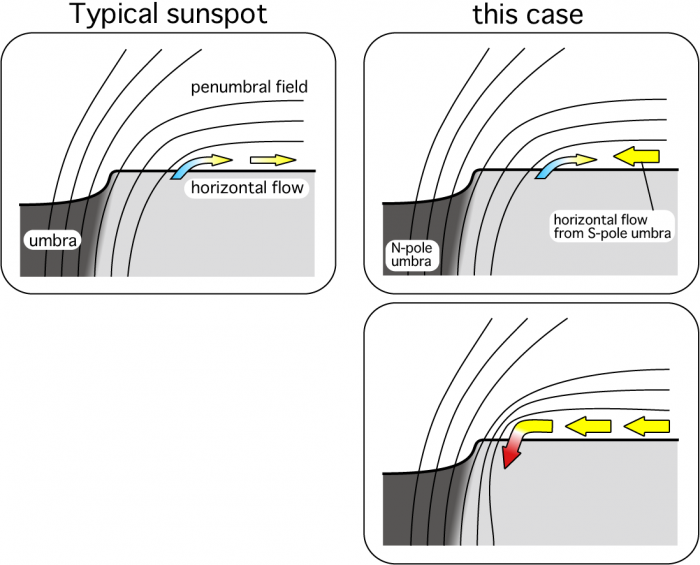 Figure 2. Schematic illustration of the formation mechanism of the strong field. The horizontal flows from the right (S-pole umbra) compress the magnetic field near the left umbra (N-pole) and the magnetic field is enhanced. (©NAOJ)

Okamoto explains, "HINODE's continuous high-resolution data allowed us to analyze the sunspots in detail to investigate the distribution and time evolution of the strong magnetic field and also the surrounding environment. Finally, the longtime mystery of the formation mechanism of a stronger field outside an umbra than in the umbra, has been solved." These results were published as Joten Okamoto and Takashi Sakurai, "Super-strong Magnetic Field in Sunspots," in The Astrophysical Journal Letters, 852 (2018).