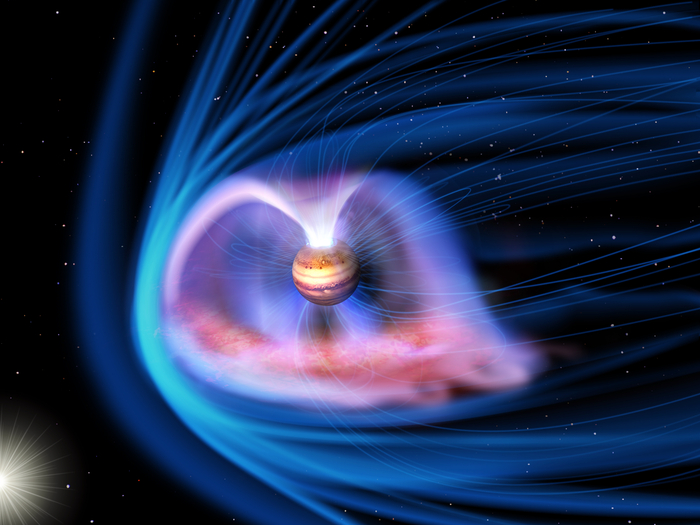 Artistic rendering of the Jupiter's aurora and magnetosphere.

Jupiter boasts some of the most powerful aurora in the solar system. Compared to the Earth's aurora, it is a few hundred times more powerful and brighter in the all spectrum range. What causes Jupiter's powerful aurora? Several hypotheses have been proposed, but it has remained a mystery due to a lack of observational evidences.

Jupiter's X-ray aurora, which is observed in the X-ray spectrum region, is thought to sparkle when oxygen and sulfur ion particles moving at nearly the velocity of light strike the Jupiter's atmosphere. How can these ions be accelerated to such high speed? There are two leading hypotheses. The first one assumes that the solar wind speeding up the ions, similar to the case of the Earth's aurora. The other proposes that the ions are being accelerated by the rapid spin of the Jupiter, the Jupiter's own magnetic field and plasma provided by the Jupiter's satellite Io.

Kimura continues, "We observed the X-ray aurora for 10 hours once-daily, 6 times in total. Thanks to the high resolving power of the Chandra X-ray observatory, we could obtain the detailed spatial structure and its time variations of the X-ray aurora. The spectral data taken by the XMM-Newton told us the volcanic gases from the satellite Io and oxygen atoms can exist in the solar wind emit X-ray." 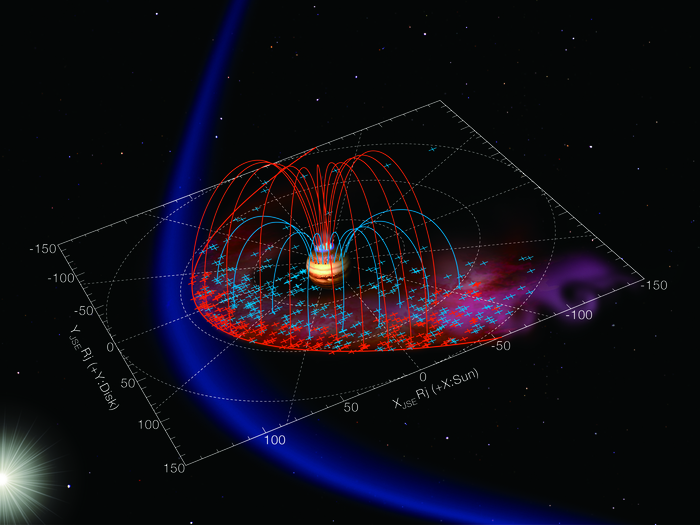 Spatial distribution of the magnetic flux line of the X-ray aurora at the Jupiter's magnetosphere.

Another study out today, led by William Dunn from UCL and co-authored by the JAXA research team also analyzed the X-ray data taken in 2011. Despite the complete difference in condition of the solar wind observed in 2014, the team found the similar trends, i.e., the correlation between the solar wind and the strength of the X-ray aurora, and the lines of magnetic force connected with the outer region of the Jupiter's magnetosphere. These are consistent with the results based on the observations in 2014.'

So you are aware, we've included the following paragraph in our release about Tomoki's paper (as well as including a full list of authors and bibliographic information of the paper):

'Another study out today, led by Tomoki Kimura from the Japan Aerospace Exploration Agency (JAXA) and co-authored by the UCL researchers, reports that the X-ray aurora responds to quieter 'gusts' of solar wind, deepening this connection between Jupiter and the solar wind.'

Yamazaki, the HISAKI project manager tells, "Auroras in atmospheres of other planets can be formed by the mechanisms similar to the Jupiter. For example, there is a high possibility of similar phenomena in the atmosphere of Saturn, because plasma particles originated from water of the Saturn's satellite Enceladus are captured by the Saturn's magnetic field and turn rapidly around the Saturn. Of course, auroras can form in the atmosphere of an exoplanet. In some day, our research may apply to study aurora phenomena of exoplanets."

Kimura tells about his future researches as follows, "We plan further observations of the Jupiter's auroras by the X-ray Astronomical Satellite "HITOMI" (ASTRO-H) and JUNO probe which will perform a polar orbit insertion. By using HISAKI's data complementary, we would like to understand the acceleration mechanism of particles inducing the Jupiter's aurora phenomena. "