Overview: the aurora that heats a planet

Sitting more than five times the distance from the Sun as the Earth, Jupiter is not expected to be particularly warm. Based on the amount of sunlight received, the average temperature in the giant planet's upper atmosphere should be about 200 K or a chilly -73 Celsius. Instead, the measured value sits around 700 K or 420 Celsius. The source of this global heat has remained elusive for 50 years, causing scientists to refer to the discrepancy as an "energy crisis" for the planet.

Now research led by James O'Donoghue (JAXA) has found the likely source of Jupiter's thermal boost. By creating the highest resolution global maps to date of the temperature of Jupiter's upper atmosphere, the team has revealed that the main source of the extra heat is Jupiter's powerful aurora.

Movie: Jupiter is first shown in visible light for context before an artistic impression of the Jovian upper at-mosphere's infrared glow is overlaid. The brightness of the upper atmosphere corresponds to temperature. From hot to cold: white, yellow, bright red, dark red. The aurorae are the hottest regions and the animation shows how heat may be carried by winds away from the aurora and cause planet-wide heating. The end of the animation shows the real data with a temperature scale, indicating the observed global temperatures measured in the study. A still image is shown in Figure 2. (Credit: J. O'Donoghue (JAXA)/Hubble/NASA/ESA/A. Simon/J. Schmidt)

Auroras occur when charged particles are caught in a planet's magnetic field. These spiral along the field lines towards the planet's magnetic poles, striking atoms and molecules in the atmosphere to release light and energy. On Earth, this leads to the characteristic light show that forms the aurora borealis and australis. On Jupiter, the material spewing from its volcanic moon, Io, leads to the most powerful aurora in the Solar System and enormous heating in the polar regions of the planet. Although the Jovian aurorae have been a long-standing candidate heat source for the majority of the planet, observations have previously been unable to confirm or deny this until now.

The team observed Jupiter with the 10-metre Keck II telescope on Mauna Kea in Hawai'i for five hours on two separate nights in April 2016 and January 2017. Using the Near-Infrared Spectrometer (NIRSPEC) on the Keck II, emission from H3+ ions in Jupiter's atmosphere was detected from the planet's poles down to the equator. H3+ ions are a major constituent of the ionized part of Jupiter's upper atmosphere and the intensity of the emission can be used to derive the temperature of that region.

Previous maps of the upper atmospheric temperature were formed using images consisting of only several pixels. This is not enough resolution to see how the temperature might be changed across the planet, providing few clues as to the origin of the extra heat. In order to improve the situation, the team took a two step approach. The first step was to utilise the power of the Keck II to take many more temperature measurements across the face of the planet. The second step was to only include a temperature measurement in the final map of the atmosphere if the uncertainty in the recorded value was less than 5%. 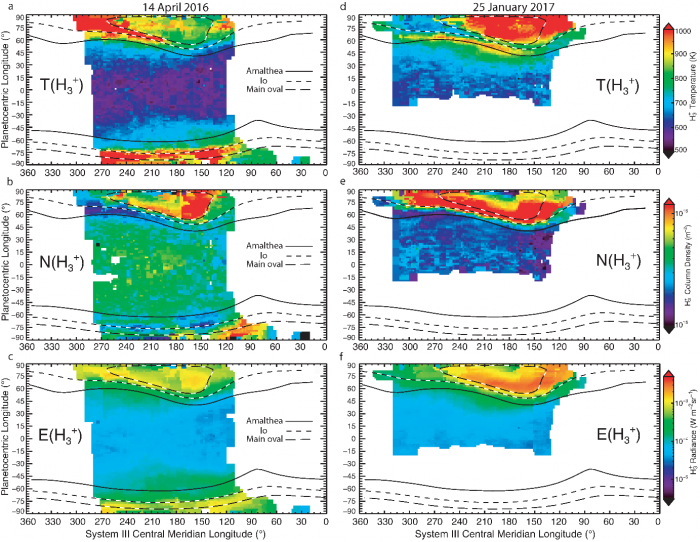 "It took years of careful work to clean and map out the data and analyse it," said James O'Donoghue. "The final products were temperature maps that are comprised of over ten thousand individual data points."

The temperature maps of Jupiter's upper atmosphere show clear gradients, with temperatures decreasing from the polar auroral regions to the equator. This demonstrated that Jupiter's aurora was circulating auroral energy planet-wide, with winds carrying the heated atmosphere to lower latitudes and adjacent longitudes.

The idea that the aurora could be the source of Jupiter's mysterious energy had been proposed previously. However, global models of Jupiter's upper atmosphere suggested that winds headed to the equator would be overwhelmed and redirected by west-ward winds driven by the planet's rapid rotation. This would prevent the auroral energy from escaping the polar regions and heating the whole atmosphere. However, this new observational result suggests that such trapping is not occurring, and that the west-ward winds may be relatively weaker than expected compared with equatorward winds. 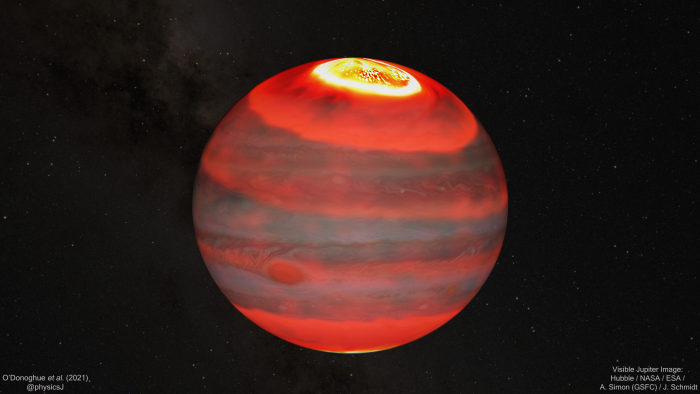 Figure 2: Jupiter is shown in visible light overlaid with an artistic impression of the Jovian upper atmosphere's infrared glow. The brightness of the upper atmosphere corresponds to temperature. From hot to cold: white, yellow, bright red, dark red. The aurorae are the hot-test regions and show how heat may be carried by winds away from the aurora and cause planet-wide heating.
(Credit: J. O'Donoghue (JAXA)/Hubble/NASA/ESA/A. Simon/J. Schmidt)

From orbit around the Earth, JAXA's Hisaki satellite has observed the aurora-generating magnetic field around Jupiter since the mission's launch in 2013. This long term monitoring has revealed that Jupiter's magnetic field is strongly influenced by the solar wind; a stream of high energy particles that emanates the Sun. The solar wind carries its own magnetic field and when this meets Jupiter's planetary field, the latter is compressed. Further evidence for this interaction and the resultant heating was found when the team observed an extended high temperature region of gas that appeared to be propagating from the aurora. At the time of observation, pressure from the solar wind was particularly high at Jupiter and the field compression is likely to have created an enhanced aurora. The resulting heat wave was the structure spotted by the team as it began to move away towards lower latitudes.

"It was pure luck that we captured this potential heat-shedding event," notes O'Donoghue. "If we'd observed Jupiter on a different night, when the solar wind pressure had not recently been high, we would have missed it!"

The discovery of the temperature gradient extending between Jupiter's auroral region and equator may end the planet's "energy crisis". However, while auroras are expected phenomenon on giant gaseous words, the complex state of their winds may determine how effective the heat source is on different planets.