A research team led by Researcher Tomoki Kimura (researcher of the Japan Aerospace Exploration Agency as well as a research fellowship for young scientist of the Japan Society for the Promotion of Science) captured a sudden brightening (auroral expansion) through long-term continuous observations of Jupiter by the Spectroscopic Planet Observatory for Recognition of Atmosphere "HISAKI," and clarified for the first time in the world that this phenomenon was caused by the rapid rotation of Jupiter.

Jupiter has a magnetic moment that is more than 20,000 times stronger than that of Earth. Its magnetic field is rotating with Jupiter at high speed (about 10 hours per rotation.) Jupiter's satellite Io, which is the most volcanically active in the Solar System, is continuously releasing about one ton of plasma per second on average. Regular generation of aurora has been observed on Jupiter due to synergy effects of plasma caused by the satellite Io, solar winds, and Jupiter's magnetic field. However, auroral expansion, which can be seen on the Earth, was only fragmentally observed on Jupiter, thus the cause of aurora explosions on Jupiter were not clearly determined if they were due to solar wind or Jupiter itself.

The above research results will be published in the American magazine "Geophysical Research Letters." 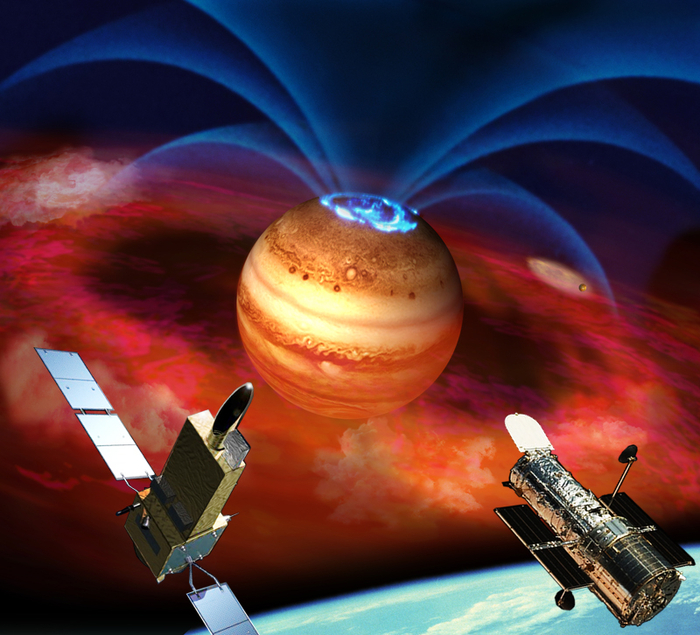 The imaginary description of Jupiter's aurora observations by the HISAKI (left) and the Hubble Space Telescope (right.) Blue-whitish half-rings emitted from Jupiter's polar regions are aurora observed by the Telescope. Blue indicates magnetic lines extended from aurora. A celestial body seen behind the Telescope is Jupiter's satellite Io (center right.) The reddish zone around Jupiter is plasma gas, which shows the disturbance of the magnetic field that causes aurora explosion.