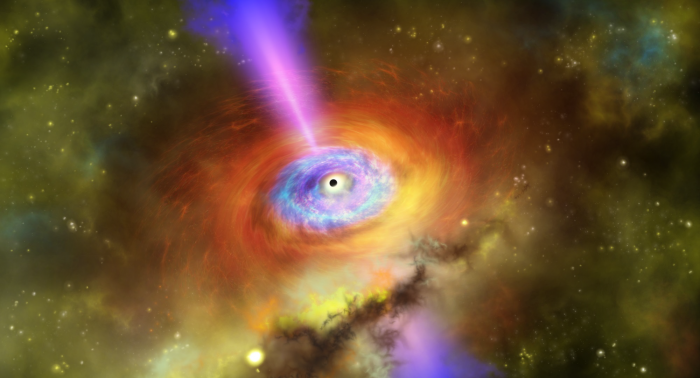 Spectroscopic Planetary Observatory "HISAKI" was first applied to astrophysical observations and challenged to estimate the amount of warm gas at the center of a cluster that gives a clue to constrain heating mechanism by the central black hole.

A cluster of galaxies is the most massive gravitationally bound system in the Universe and contains more than hundreds of galaxies. If we observe a cluster in visible light, it merely is a collection of galaxies. Not only galaxies are the component of a cluster of galaxies. X-ray observations revealed a significant amount of hot gas exists in galaxy clusters. The X-ray emitting gas is diffuse and has an extremely high temperature. Filling in the space between galaxies, the total amount of hot gas is 10 times the mass of the member galaxies.

However, astrophysicists have failed to detect it. Why was the gas at a lower temperature not discovered? Researchers have been investigating mechanisms keeping the gas hot at the cluster center.

One theory implies that some heating source, such as the jet from the supermassive black hole at the cluster center, compensates for the radiative cooling. This hypothesis can partly be verified by observing "warm" gas, the gas at an intermediate temperature, between that of the cool and of the hot gas.

There is a problem to observe the neutral Helium line. Hydrogen, the most abundant element in the Universe, prevents us from detecting all lights with a wavelength shorter than 91.2 nm. This "91.2nm" limit is referred as the Lyman edge. The interstellar gas becomes increasingly transparent again in the X-ray region (wavelengths below 10 nm). In short, we cannot observe the light with a wavelength between 10 nm and 91.2 nm.

Luckily for us, the expansion of the Universe enables us to detect such lights. As the Universe expands, more distant objects move away from us at a higher speed. This movement of objects results in the so-called Doppler effect and the wavelength of the light emitted from a distant object shifts to a longer wavelength.

The research team took advantage of this and observed a cluster of galaxies named as RCS2 J232727.6-020437 at 6.4 billion light-years away. The neutral Helium line emitted from this cluster is shifted to 99.3 nm, which is longer than the wavelength of the Lyman edge. Thus, the line from this cluster is accessible to us. RCS2 J232727.6-020437 was discovered by optical imaging observations conducted by the Canada-France-Hawaii Telescope and is known as the most massive galaxy cluster at this distance to date. Observations by the Chandra X-ray Space Observatory have revealed an enormous amount of hot gas at the center of the cluster, suggesting that there should be a significant amount of cold gas due to radiative cooling, at a rate of hundreds of the solar mass per year.

Although the Doppler shift helps us to measure the neutral He line from this cluster, the Earth's atmosphere hampers the observation. The light with the wavelength of 99.3 nm is still in a region of the extreme ultraviolet (EUV). Our atmosphere almost completely absorbed the EUV light. Thus, the research team utilized space observatory.

The team tried to measure the Helium line by the Spectroscopic Planetary Observatory "HISAKI" equipped with a EUV spectrometer. In this study, the HISAKI's observations put an upper limit on the neutral Helium line and constrained the amount of warm gas at the cluster center. The current and previous results contradict to the theoretical prediction and suggest the amount of warm and cold gas is not so much.

This research results proved that space telescope that was designed and developed to observe a planetary atmosphere is applicable for studying astrophysical objects such as galaxies, clusters of galaxies, etc. Since HISAKI is currently the only instrument to observe the celestial objects at the EUV, ISAS/JAXA expects HISAKI is utilized for astronomical observations as well and contributes to progress both astrophysics and planetary science.