Observations by "Hisaki", the Extreme ultraviolet spectroscope for Exospheric Dynamics mission, showed that the effects of the solar wind extend to within the Jovian magnetosphere, the strongest in the solar system. This research result overturns the conventional idea the solar wind cannot reach near Jupiter, which is strongly protected by its powerful magnetosphere.

To clarify the process by which the solar wind enters the Jovian magnetosphere, a research team lead by Go Murakami (ISAS/JAXA) is preparing to work with overseas researchers to conduct simultaneous in situ observations by NASA's Jupiter probe "Juno" and ISAS's Hisaki.

The research result was published in the 20 December 2016 issue of Geophysical Research Letters. 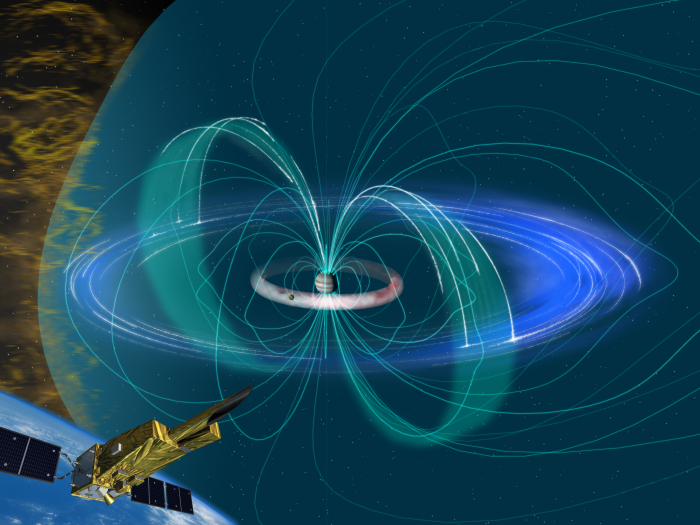 Artist's concept of this research

The solar wind is a high-speed plasma flow, which travels at several hundreds of kilometers per second. The planets of the solar system are continually bombarded by this wind. One important effect on the solar wind is that of the large magnetic fields of some planets, which act as a protective barrier.

Not every planet has such a barrier. Earth does, and its surrounding magnetosphere prevents the direct impact of the solar wind. However, some part of solar wind energy encroaches upon the magnetosphere, causing phenomena such as auroras and radiation bands. Mars and Venus, which do not have large magnetic fields, are directly affected by the solar wind, which even today blows part of their atmospheres into outer space.

Jupiter has a strong magnetic field, about 20,000 times stronger than Earth's, making it the largest and strongest in the solar system. Jupiter is furthermore much farther from the Sun than Earth is. Because of these it was thought that the solar wind would not affect Jupiter, which lies deep inside its magnetosphere.

Even so, observations have been made suggesting an effect of the solar wind. This effect is seen in a plasma cloud (the Io plasma torus) caused by volcanic gas from the Jovian satellite Io, which is distributed in a donut shape at a distance of about six times the Jovian radius.

It was known that the brightness of plasma in the torus is asymmetric, being brighter on the evening side with respect to the Sun and darker on the morning side (Fig. 1). The causes of this asymmetry remained unknown, however, due to a lack of observational evidence.

Figure 1. Spectral image of the Io plasma torus near Jupiter, taken by Hisaki on 1 January 2014. The image shows the emission intensity of sulfur ions around Jupiter, following its rotation. The evening side clearly glows brighter than the morning side. (Source: Adapted from Fig. 1 in Murakami et al. (2016)). 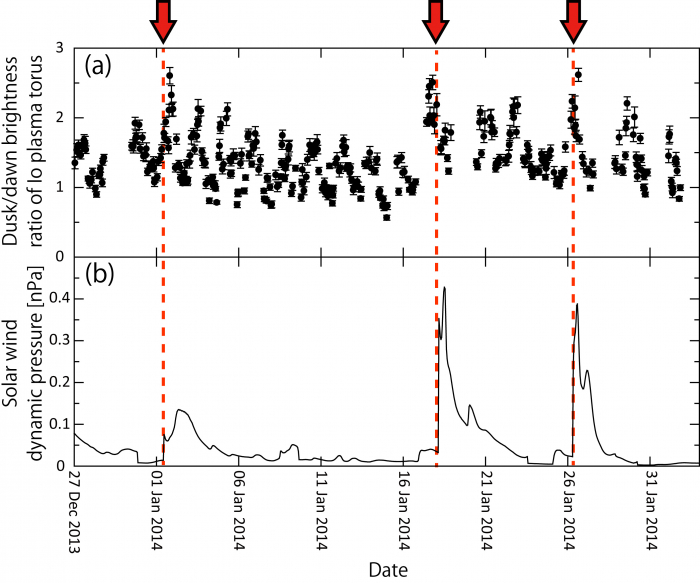 Figure 2. Change over time of (a) morning and evening asymmetry in the Io plasma torus and (b) solar wind strength (dynamic pressure) as observed by Hisaki in January 2014. Arrows and dotted lines indicate times when strong solar wind arrived near Jupiter and asymmetric strengthening in the morning and evening (the evening side is brighter than the morning side) in the Io plasma torus. (Source: Adapted from Fig. 2 in Murakami et al. (2016)).

Figure 2(a) shows the change over time of morning and evening asymmetry (differences in morning and evening brightness) in the Io plasma torus. From these results, the research team confirmed previous observations that the evening side is brighter (the evening/morning ratio is greater than 1), and that the change over time is very large, with the evening side suddenly becoming 2.5 times brighter than the morning side.

Figure 2(b) shows the change over time in the strength (dynamic pressure) of the solar wind at Jupiter, as estimated from observations from sateloites orbiting around Earth.

Regarding the mechanism by which the solar wind can have effects on Jupiter's vicinity, one theory is that a disk-like current flowing around Jupiter (at a distance of about twenty to thirty times Jupiter's radius) is affected by the solar wind, and part of this current moves along Jovian magnetic lines of force. Verifying this hypothesis requires numerical simulations and on-site observations. The research team is currently conducting simultaneous observations using JAXA's Hisaki and NASA's Juno, which entered Jovian orbit in July 2016. We are preparing for cooperation with overseas researchers to perform Juno observations of changes in currents near Jupiter and Hisaki observations of the Io plasma torus to reveal any relations between them.