Solar wind forms the energy source for aurora explosions. How does the Earth's magnetosphere take in the energy of the solar wind? An international team led by Hiroshi Hasegawa and Naritoshi Kitamura (ISAS/JAXA) analyzed data taken by the US-Japan collaborative mission GEOTAIL and NASA's MMS satellites and revealed that the interaction between the magnetic fields of Earth and the Sun, or more precisely the phenomenon known as magnetic reconnection, can feed the aurora explosions. 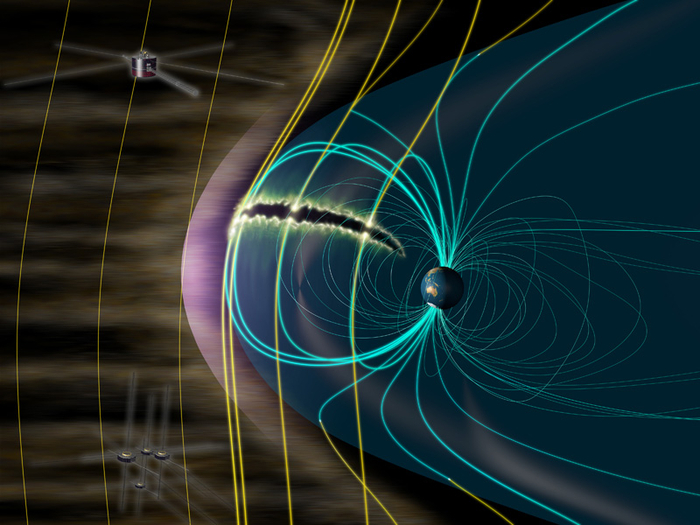 Artist concept of the GEOTAIL and the MMS missions to study how does the Earth's magnetosphere take in the energy of the solar wind. (Credits: ISAS/JAXA)

The region of outer space near Earth, also called geospace, is not a peaceful region. For example, solar wind, a fast flow of charged particles driven by the Sun's magnetic field that blows against the Earth, is harmful for lives on the Earth. Fortunately, our planet has a shield. The Earth's magnetosphere provides an invisible protection from the solar wind.

The interaction between the solar wind and Earth's magnetosphere can cause various phenomena, such as aurora.
According to the prevailing theory, an aurora explosion involves four main processes:
(1) The energy of the solar wind enters the Earth's magnetosphere,
(2) The tail of the magnetosphere stores the energy,
(3) The stored energy is released quickly and transferred to the plasma particles,
(4) These plasma particles move toward the Earth's polar region along magnetic field lines, and finally cause an aurora explosion.

Magnetic reconnection is believed to be the key mechanism involved in the entry (1) and release (3) of the energy of the solar wind. Using data from the GEOTAIL (*1) and MMS (*2) missions, the international team led by Hiroshi Hasegawa and Naritoshi Kitamura (ISAS/JAXA) studied the first of the four processes mentioned above. The data was collected in October and November 2015. On one day, GEOTAIL and MMS both detected plasma jets produced by magnetic reconnection lasting over a period of 5 hours.

Combining these results, the team concluded that the magnetic reconnection process is sufficient for taking in the energy of the solar wind and inducing aurora explosions.

Furthermore, this study revealed that the magnetic reconnection line shifts to the winter hemisphere side. A previous study pointed out that a shift may result in a decline in the efficiency of the energy intake from the solar wind. Also, aurora activities are known to decrease during the summer and winter seasons. Therefore, the shift of the magnetic reconnection line may be related with the seasonal variations of the auroral activities.

In this context, JAXA plans to launch a new spacecraft called the ERG satellite (*3) that aims to observe the inner region of the magnetosphere. Collaborative observations with GEOTAIL and ERG satellites will help to understand phenomena taking place in the geospace.

*1 Geotail satellite: GEOTAIL is a satellite whose primary objective is to study the structure and dynamics of Earth's magnetotail. The satellite was named "GEOTAIL" because it explores that magnetotail. ("Geo" is a prefix for words relating to the Earth.) The GEOTAIL mission is a collaborative project between Japan and the United States. The satellite was developed and is operated by Japan's Institute of Space and Astronautical Science (ISAS), one of the predecessor bodies of JAXA. It was launched by the National Aeronautics and Space Administration (NASA) in 1992, using the Delta II launch vehicle.

*2 MMS (Magnetospheric MultiScale) Mission: MMS investigates how the Sun's and Earth's magnetic fields connect and disconnect, explosively transferring energy from one to the other in a process that is important at the Sun, other planets, and everywhere in the universe, known as magnetic reconnection. Reconnection limits the performance of fusion reactors and is the final governor of geospace weather that affects modern technological systems such as telecommunications networks, GPS navigation, and electrical power grids. Four identically instrumented spacecraft measure plasmas, fields, and particles in a near-equatorial orbit that will frequently encounters reconnection in action.
http://mms.gsfc.nasa.gov/about_mms.html
The four MMS Observatories launched on-time on 3.12.2015 at 10:44 pm EDT and were inserted with perfect accuracy and attitude into our initial orbit by the Atlas-Centaur AV-53.
http://mms.gsfc.nasa.gov/mission_highlights_post.html