The shower of electrons bouncing across Earth's magnetosphere - commonly known as the Northern Lights - has been directly observed for the first time by an international team of scientists. While the cause of these colorful auroras has long been hypothesized, researchers had never directly observed the underlying mechanism until now.

The scientists published their results today in Nature.

The spectacle of these subatomic showers is legendary. Green, red, and purple waltz across the night sky, blending into one another for a fantastic show widely considered one of the great wonders of the world. Among a variety of auroras, pulsating auroral patches appearing at dawn are common but the physical mechanisms driving this auroral pulsation had so far not been verified through observation. 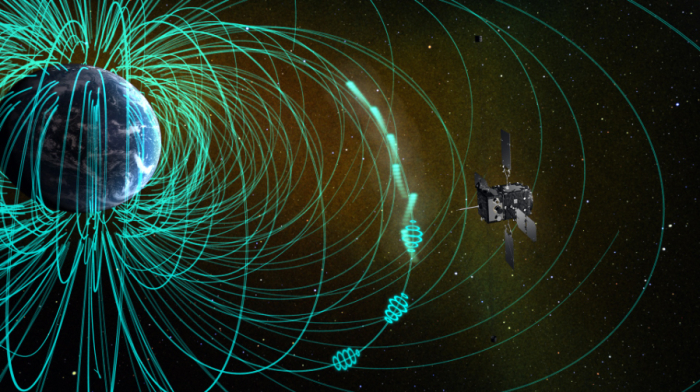 With the advent of a new satellite with advanced measuring tools, researchers have now identified that this wonder is caused by the hard-to-detect interaction between electrons and plasma waves. This interaction takes place in the Earth's magnetosphere, the region surrounding the Earth in which the behavior of the electric particles is usually governed by the planet's magnetic field.

"Auroral substorms ... are caused by global reconfiguration in the magnetosphere, which releases stored solar wind energy," writes Satoshi Kasahara, an associate professor in the Department of Earth and Planetary Science at the Graduate School of Science of the University of Tokyo in Japan, the lead author of the paper. "They are characterized by auroral brightening from dusk to midnight, followed by violent motions of distinct auroral arcs that eventually break up, and emerge as diffuse, pulsating auroral patches at dawn."

The global reconfiguration often drives a specific type of plasma waves called chorus waves, to rain electrons into the upper atmosphere. This stabilizes the system, and gives off a colorful light as the electrons fall. However, scientists have questioned if the chorus waves were powerful enough to excite electrons to the extent of creating auroras.

"We, for the first time, directly observed scattering of electrons by chorus waves generating particle precipitation into the Earth's atmosphere," Kasahara says. "The precipitating electron flux was sufficiently intense to generate pulsating aurora."

Scientists couldn't see this direct evidence of electron scattering before because typical electron sensors cannot distinguish the precipitating electrons from others. Kasahara and his team designed a specialized electron sensor that observed the precise interactions of auroral electrons driven by chorus waves. The sensor was aboard the Exploration of energization and Radiation in Geospace (ERG) satellite, also known as the Arase spacecraft, launched by the Japan Aerospace Exploration Agency.

Video title: Video of ERG (Arase) spacecraft observation revealing the secret of pulsating aurora
Video caption: Pulsating aurora, the origin of the blinking patches of light, is now directly observed by the ERG spacecraft. Electrons in the magnetosphere, which usually bounce along the geomagnetic field, are thought to be scattered by chorus waves, resulting in precipitation into the atmosphere. The intermittent bursts of chorus waves cause the pulsations of precipitation and associated auroral illumination. The ERG spacecraft showed that this electron scattering by chorus waves indeed takes place in the magnetosphere.
Video credit: 2018 ERG science team.

"By analyzing data collected by the ERG spacecraft more comprehensively, we will reveal the variability and further details of plasma physics and resulting atmospheric phenomena, such as auroras," Kasahara says.