An international collaborative research group led by Professor MIYOSHI Yoshizumi (Institute for Space-Earth Environmental Research, Nagoya University, Arase Project Scientist) conducted a comprehensive study combining electromagnetic wave and electron observations from JAXA's Arase satellite, optical observations of the aurora in Northern Europe using the European Incoherent Scattering Radar (EISCAT) installed in Norway, and computer simulations. Electromagnetic waves with a frequency of several kilohertz known as "chorus waves" were observed to trigger electrons over a wide energy band of geospace to fall towards the Earth all at once and generate the flickering aurora referred to as a "pulsating aurora". The high-energy electrons in the radiation belt penetrating into an altitude of 60 - 80 km were discovered to be responsible for the depletion of ozone in the middle atmosphere.

The aurora, which is visible at higher latitudes in both the northern and southern hemispheres, is a luminescence phenomenon that occurs when electrons with energies of several kilo-electron volts precipitate from outer space and collide with the atmosphere at an altitude of around 100 km. One type of aurora is known as the "pulsating aurora" as it flickers in cycles of several seconds. Observations such as those from the Arase satellite, have revealed that such pulsating auroras are generated by the scattering of electrons in geospace by a type of electromagnetic wave called a "chorus wave", which is often referred to as a "space chirp" [1]. In addition to this, it is also known that electrons with an extremely high energy of several mega-electron volts penetrate into the Earth's atmosphere. These high energy electrons are considered to originate in the radiation belts (Van Allen belts) around the Earth and have also been referred to as "killer electrons". Theoretical research and observations with the Reimei satellite from this research group have predicted that high energy electrons are brought into the middle atmosphere when a pulsating aurora is generated due to chorus waves. It was predicted that this would cause atmospheric conditions in the atmospheric region known as the mesosphere to change at altitudes of 60 - 80 km [2].

The Arase satellite was launched in December 2016, with scientific operations scheduled to begin from the end of March 2017. Aurora and space storm activity are known to be active around the spring and autumn equinox. The launch orbit of Arase was therefore designed so that scientific observations could be started shortly after the spring equinox, on the morning side of geospace where chrous waves are most likely to be generated.

Immediately after the launch of Arase, a coronal hole, which is a high-speed solar wind generation region that produces space storms, appeared on the surface of the Sun. Since the Sun rotates every 27 days, if the coronal hole persisted on the Sun's surface for a prolonged period, then a space storm was expected to occur just after the beginning of Arase's scientific observations.

With this in mind, a variety of international coordination efforts and instrument installation work were undertaken in advance so that immediately after the start of scientific observations, it would be possible to perform coordinated observations between Arase and ground optical observations with EISCAT. The experimental schedule for EISCAT had to be adjusted so that the insturment was able to coordinate observations with Arase at the end of March. The Japanese research group additionally installed aurora optical camera system and other ground-based instruments prior to the beginning of March in preparation for the observations at the end of that month.

On March 27, 2017, the expected space storm broke and intense aurora explosions occurred multiple times over the course of several days. Arase also gathered many scientific results, observing active chorus waves and disappearance and enhancement of electrons and ions in the geospace. One of Arase's main scientific goals was to determine if the chorus waves accelerate high-energy eletrons in the Van Allen belts. Arase therefore made precise measurements of the abundance of high-energy electrons, known as a phase space density. The results are shown in Figure 1. It was revealed that the phase space density increased over several days, centered at a distance of around four times the radius of the Earth which aligns with the location of the radiation belts. This indicates that the chorus waves do indeed produce the high-energy electrons that exceed energies of mega-electronvolts inside the radiation belts. 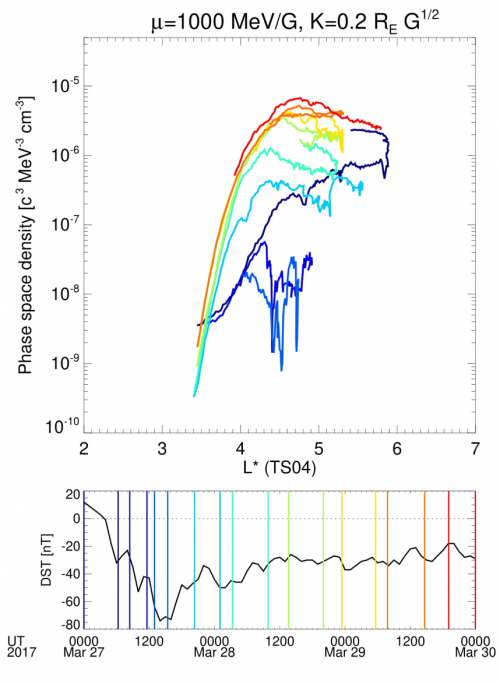 Figure 1: Time variations of the phase space density of radiation belt electrons observed by the Arase satellite. The change in colour from cool to warm hues corresponds to time progressing from the beginning to the end of the space storm. Towards the end, the phase space density increases at nearly four times the radius of the Earth, indicating that high-energy electrons are being produced in the radiation belt. (Miyoshi et al., 2021)

During the space storm, the advanced preparations were successfully followed so that Arase successfully coordinated with observations with EISCAT and optical observations at the ground. For this research, we performed a simulation that took the information on electromagnetic waves and electrons in geospace observed by Arase, and compared this to the results from the ground-based observations such as those from EISCAT and the optical observations. This gave a comprehensive analysis of how electrons precipitate to the Earth due to the interaction between the chorus waves and electrons.

Figure 2 shows the chorus wave and electron data observed by Arase in geospace. Observations by Arase show the emergence of strong chorus waves and the presence of electrons with a wide energy range from a few kilo-electronvolts to a few mega-electronvolts. The waveform observation data of the chrous waves measured by Arase, and the electron observation data at high energy and angular resolution, were used to investigate the detailed dynamics of the electromagnetic waves and electrons at this time. 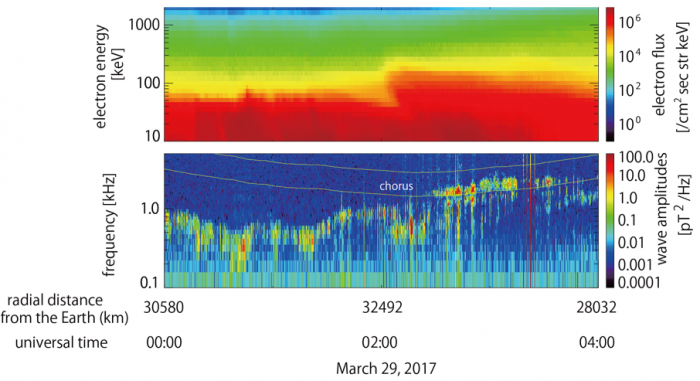 Figure 2: Top: Observation of the chorus waves by the Arase satellite. Strong plasma waves (yellow and red) visible at hundreds of hertz to kilo-hertz are chorus waves. Lower: Observation of electrons in the geospace with the Arase satellite. Electrons with tens to kilo-electronvolt of energy generate the pulsating aurora. Conversely, electrons with energy of several hundred kilo-electronvolts to several mega-electronvolts are Van Allen Belt electrons. (Miyoshi et al., 2021)

Using the observation data from Arase, we next simulated the interaction between the chorus waves and the electron-wave particle to investigate how the chrous waves affect the electrons. This revealed that the chorus waves observed by Arase can scatter electrons with a range of energies that spread over more than three orders of magnitude all at once into the atmosphere, from tens of kilo-electronvolts that generate the pulsatating aurora, through to several mega-electronvolts of the radiation belts. A lively pulsating aurora was observed in the optical observations on the ground at this time, demonstrating that the simulation was correct.

The simulation showed that a radiation belt electron with an energy of several mega-electronvolts that precipitate into the atmosphere can penetrate to an altitude in the vacinity of 100 km, where the aurora normally glows, and then enter the lower middle atmosphere (mesosphere), where it is expected to ionise the atmosphere there. To verify this is occuring, we analysed the EISCAT data, which can identify the altitude of the penetrating electrons by measuring the altitude profile of the electron density above 60 km. Figure 3 shows the altitude profile of the electron density by EISCAT. The analysis showed clearly that the electrons had penetrated to the lower region of the mesosphere, near an altitude of 60 km. Furthermore, the energy spectrum of the electrons that have precipitate into the atmospehre can be estimated from an inversion calculation based on the EISCAT observations. The result is consistent with the energy spectrum calculated in the simulation of the wave-particle interactions based on the observations of Arase, and demonstrates that the electromagnetic waves and electrons in geospace observed by Arase are causing the pulsating aurora and ionisation of the middle atmosphere. 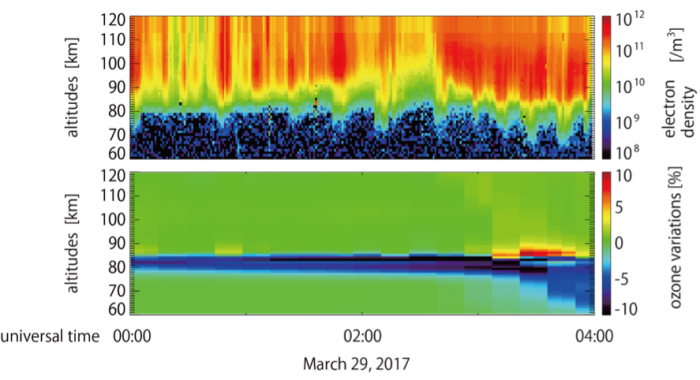 Figure 3: Top: Electron observations between 60 km - 120 km in altitude taken with the EISCAT VHF radar. The redder the colour, the more electrons are present, indicating that electrons precipitate from space. Lower: Change in ozone from an altitude of 60 km to 120 km (Computer Simulation). It can be seen that the abundance of ozone at about 80 km in height is reduced by 10% or more due to the precipitation of electrons from space. (Miyoshi et al., 2021)

What kinds of changes do we expect in the middle atmosphere from the high-energy electrons in the radiation belts precipitating to this altitude? To explore this, this research performed an atmospheric chemistry simulation for the region between 20 km to 150 km, using the EISCAT observation data as the input. In Figure 4, we can see that as the electrons in the radiation belts penetrated, ozone can be reduced by 10% or greater at altitudes lower than 100 km (about 80 km) where the pulsating aurora glows. In other words, the chorus waves observed by Arase generate the pulsating aurora and the ozone is depleted at lower altitudes. 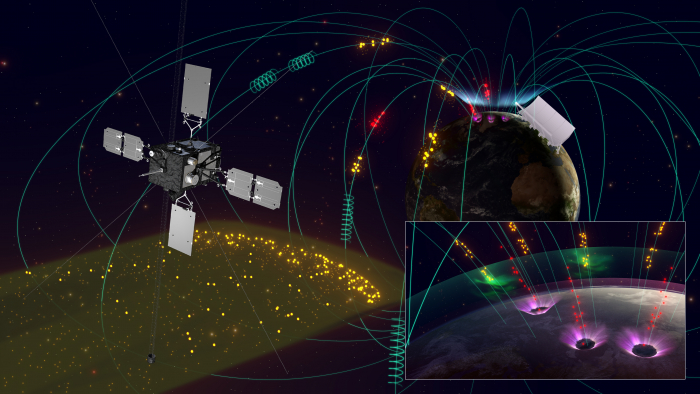 Figure 4: Overview of this research: in geospace, the Arase satellite observes chorus waves and radiation belt electrons, while on the ground, EISCAT and optical observations observe the pulsating aurora and electron precipitation in the mesosphere. (Credit: ERG science team)

3. Significance of the research

This research was achieved through joint observations with the Arase satellite, EISCAT and ground optical observations, with a comprehensive analysis utilizing numerical simulations. The results demonstrated that when chorus waves are generated in geospace, electrons with a wide range of energies are scattered into the Earth's atmosphere, creating a pulsating aurora and at the same time, electrons from the radiation belts deplete ozone in the middle atmosphere (Figure 5). It has been pointed out that ozone depletion in the middle atmosphere is an important process that could affect climate change. The results from this study therefore suggest that the precipitation of electrons from geospace may impact the middle atmosphere and thus, climate change. 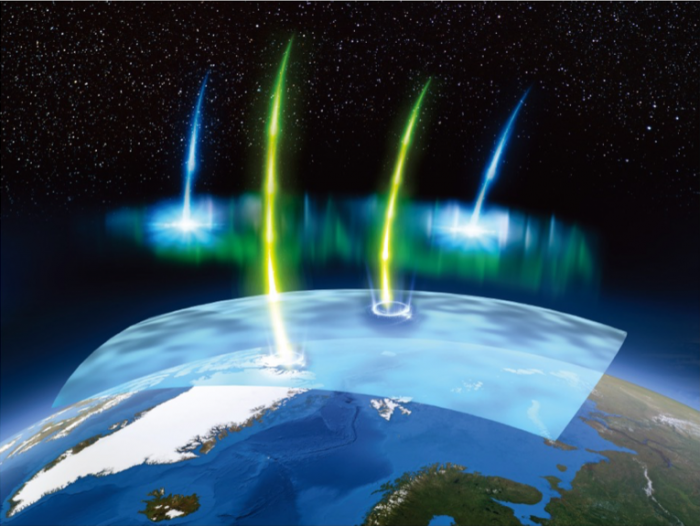 Pulsating auroras are a universal phenomenon that accompanies an aurora breakup (substorm) and occurs almost every day. As to the process of destroying ozone due to the precipitation of charged particles from space, it is known that high-energy solar particles that form during an explosion (flare) on the Sun's atmosphere also penetrate to the middle atmosphere, but their frequency is not so high. If ozone depletion occurs frequently with pulsating auroras, then its effect is expected to be non-negligible compared with ozone destruction caused by solar high-energy particles. It has not yet been clarified how frequently the radiation belt electrons precipitate due to the pulsating aurora occurs, and this will be important to evaluate through future research. Additionally, the effect of ozone depletion associated with the pulsating aurora on the middle atmosphere needs to be evaluated using a global atmospheric model.

From 2023, the next-generation large-scale atmospheric radar EISCAT_3D will begin operation in Scandinavia run by the International Science Association, in which the National Institute of Polar Research and Nagoya University participate. With this new instrument, joint observations with Arase are also planned. Through collaborative observations with the highly sensitive EISCAT_3D radar and Arase, the details of the ozone depletion process due to the precipitation of radiation belt electrons from geospace and, by extension, the impact of environmental changes in space on the Earth's atmosphere.

Middle atmosphere
This region includes the stratosphere, the mesosphere and the bottom of the thermosphere, and extends from altitudes around 15 km to about 100 km. The middle atmosphere is a region than can treated without including moistening processes (clouds etc.) or (electromagnetic phenomena (aurora, etc).

Mesosphere
The atmospheric layer that extends between altitudes of 45 km to 85 km, located between the stratosphere (altitude 15 - 45 km) and the thermosphere (85 km and higher).