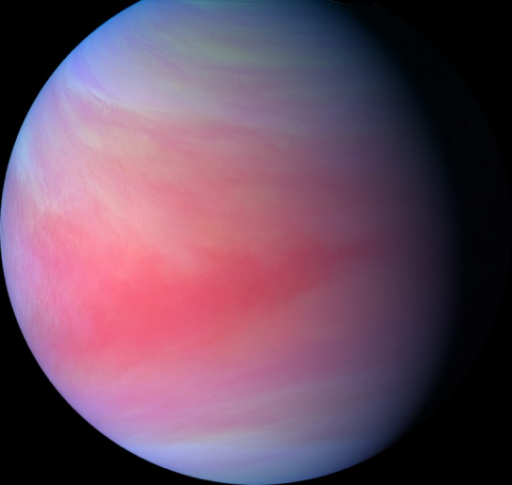 An international research team comprising researchers from Hokkaido University, the Institute of Space and Astronautical Science (ISAS, JAXA), and other institutes has elucidated how the super-rotation of Venus' atmosphere is maintained, which has been a long-standing mystery, based on the observation data gained from the Venus Climate Orbiter "AKATSUKI."

Venus has a thick atmosphere that rotates 60 times as fast as its planetary rotation. This phenomenon is known as super-rotation, and some kind of acceleration system is required for the maintenance of super-rotation. However, the details were unknown. The research team made a detailed analysis of the images and temperature data obtained from AKATSUKI and has found that thermal tides provide the acceleration system. On Earth, ocean tides are caused by the gravitational force exerted by the moon. In the atmosphere of Earth and that of Venus, tides are also caused by heating in daytime and cooling in nighttime and they are called thermal tides. The research team has found that on Venus, thermal tides play an important role in the acceleration of the atmospheric rotation at low latitudes. Although earlier studies supposed that atmospheric turbulence and waves other than thermal tides might give the acceleration, the research team has found that they work oppositely and are playing an important role at medium latitudes distant from the equator.

By the combination of these, a dual circulation system is formed for the efficient distribution of solar heat: the meridional (vertical) circulation that slowly transports heat towards the poles and the super-rotation that rapidly transports heat towards the planet's nightside. The research team has thus contributed to the achievement of the ambitious target initially set in the AKATSUKI (Planet-C) project. 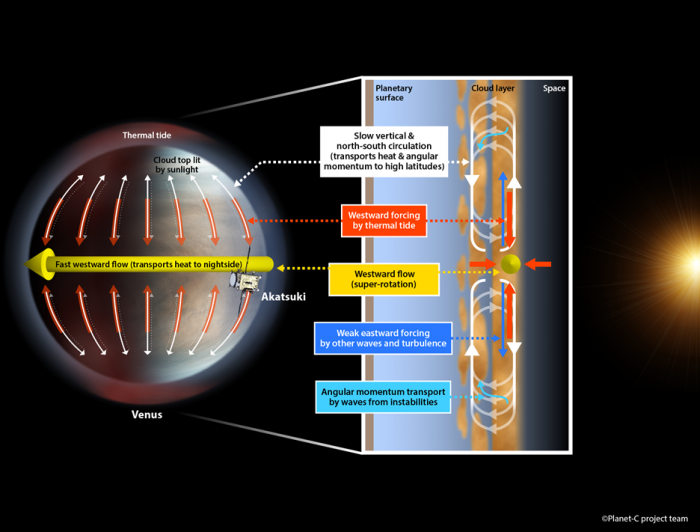 Schematic view of the proposed system that maintains the super-rotation of Venus' atmosphere. Slow vertical & north-south circulation (meridional circulation) exists at low latitudes, where more sunlight is absorbed, to high altitudes, where the amount of sunlight absorbed is smaller (white arrows). It transports angular momentum from low latitudes to weaken the strength of super-rotation, while thermal tides transport angular momentum towards low latitudes (south-north arrows among red arrows) to strengthen super-rotation. High-speed super-rotation is thereby maintained, and heat is transported from the dayside that is lit for long by the Sun to the nightside that continues to be cooled with no sunlight. Turbulence and waves other than thermal tides work oppositely, though weakly, relative to the tides (blue arrows) near the cloud top at low latitudes and play a different important role at medium to high latitudes (blue arrows; transport angular momentum, bypassing the meridional circulation). Thermal tides function to strengthen super-rotation also by vertical heat transportation (vertical arrows among red arrows).