On 9 December 2016, the electronic device, which controls both 1-µm (IR1) and 2-µm (IR2) cameras, indicated unstable power consumption and it became unable to control IR1 and IR2. The team started recovery trials on 10 December but the symptom remains to date.

In parallel, trouble shooting continues. Several possible causes, likely related deterioration of electronic parts, are identified and reproduction of the symptom in the laboratory is performed. It is almost 7 years since Akatsuki was launched in May 2010. In addition, between the failed VOI-1 in 2010 and , spacecraft and the successful VOI-R1 in 2015, instruments were exposed to higher radiation environment than anticipated. This likely caused deterioration of instruments.

Although scientific observations by IR1 and IR2 are paused, JAXA continues investigation of possible recovery of two cameras. Attempts of switching ON these cameras will regularly be made with hope.

Akatsuki aims to initiate "Planetary Meteorology" by revealing Venus' atmospheric dynamics in 3 dimension through various observations. (Please refer to: Overview of Venus orbiter, Akatsuki )
The spacecraft was successfully inserted to Venus orbit in December 2015, and regular scientific observation commenced in April 2016. The mission is so designed to probe Venus' atmosphere at various altitudes with 6 on-board instruments. (See Akatsuki's project site for more details.)
The achievement includes 3-dimensional view of cloud motion and discovery of phenomena that were never seen before. 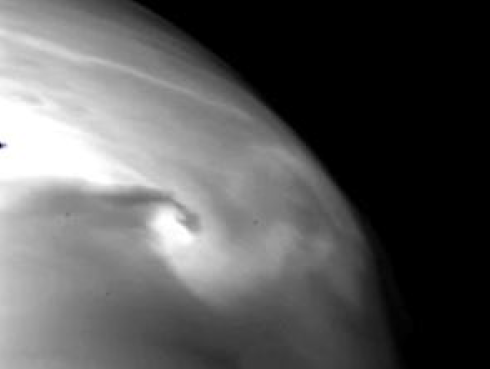 Figure: A localized vortex near the cloud base as imaged with IR2. Although similar vortices are seen in the earth atmosphere, this is seen for the first time in Venus' atmosphere.

One of such is the localized vortex. Although similar vortices are seen in the earth atmosphere, this is seen for the first time in Venus' atmosphere with IR2. The phenomenon suggests existence of strong meridional flow blocked by something (high-pressure system in the earth cases). It is mysterious how this could happen while Venus atmosphere is dominated by "super rotation", a strong westward flow that reaches 100 m/s at the cloud top.

Akatsuki team continues recovery efforts of IR1 and IR2, while continues scientific observations with other instruments. The scientific data are analyzed to enhance our understandings of Venus' atmosphere.