A planetary-scale cloud discontinuity has been periodically lashing the depths of the thick blanket of clouds on the equator of Venus since at least 1983.

5 August, 2020 - In the cloudy heavens of Venus, an enormous atmospheric disruption, not yet seen elsewhere in the Solar System, has been rapidly propagating at around 50 kilometers above the hidden surface, keeping unnoticed for at least 35 years. Its discovery Its discovery is reported in a study1 now published in the Geophysical Research Letters.

Venus is often called our sister planet because of similarities in size, mass, density and volume. However, the Venusian environment and the atmosphere is entirely different from those of Earth. The surface of Venus is the hottest in the solar system at a searing 465 °C (enough to melt lead). The atmosphere, consisting mostly of carbon dioxide with clouds made of droplets of Sulphuric acid, is about 90 times as thick as that of the Earth's and show various phenomena unobserved for other planets in the solar system.

The newly discovered phenomenon, the atmospheric disruption, can sometimes extend as far as 7,500 kilometers, across the equator, from 30º north to 40º south, and happens at the deeper clouds which comprise altitudes between 47.5 and 56.5 kilometers. It was now discovered that since at least 1983 this wall of acid clouds is periodically swiping the solid globe in five days, at about 328 kilometers per hour.

The study was led by Javier Peralta, ITYF researcher at the Japanese space agency JAXA, who first spotted what looked like an atmospheric wave, but of planet-size proportions. This was hinted from the infrared images of great detail taken by the Venus orbiter Akatsuki (JAXA) which probed the middle and lower layers of the atmosphere. 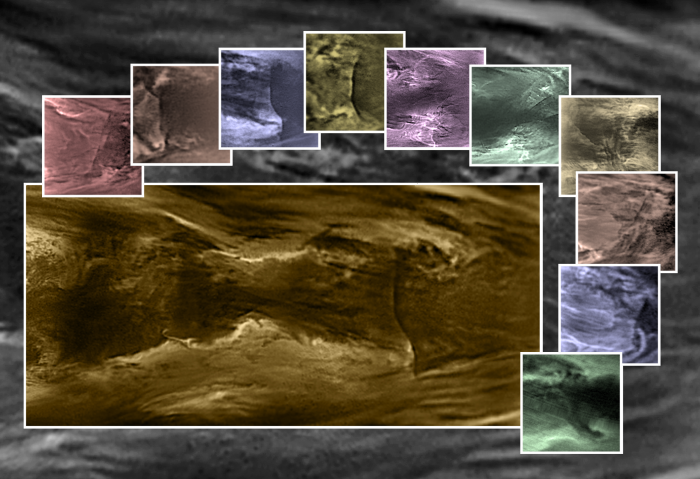 A fast disruption dominates the deeper clouds of Venus at the equatorial region, as observed in the left-bottom time composite made with infrared2.26-μm images the nightside of Venus acquired between 25-28 of August 2016 by the camera IR2 onboard JAXA's Akatsuki orbiter. The long-term evolution of the disruption from March 2016 to December 2018 is also shown as a sequence of smaller images.
Image credit: Planet-C Project Team, NASA, IRTF

While other giant cloud patterns have been observed in the atmosphere of Venus, such as the "Y wave" or the 10,000 kilometer-long bow-shaped stationary wave on the upper clouds, this is the first serious candidate to planetary wave found at low altitudes. The deep region in the atmosphere where this new disruption was discovered is responsible for the rampant greenhouse effect that makes Venus the hottest world among the planets in the solar system. Planetary-scale waves might help establish a link between the surface and the dynamics of the Venusian atmosphere as a whole, which, to an extent, is still a mystery.

"Provided that this disruption is not visible at 70 kilometers height where the cloud tops are, confirming its wave nature would be of critical importance," says Javier Peralta. "Since we may have finally found a wave able to transport momentum and energy from the deep atmosphere up to to the upper clouds where it would dissipate. It would, therefore, deposit momentum precisely at the level where we observe the fastest winds of the so-called atmospheric super-rotation of Venus, whose mechanisms have been a long-time mystery."

Besides, this research reveals this disruption is associated to important changes in the transparency of the Venusian clouds and the spatial distribution of atmospheric aerosols. Nonetheless, the biggest surprise came when Peralta and his collaborators confirmed the presence of the same features while revisiting images taken as far back as 1983, evidencing a quasi-permanent phenomenon unnoticed for decades. However, the likely mechanism that ignited and maintains with cycles of varying intensity this long-lasting discontinuity is still unknown, despite computer simulations trying to mimic it. "This atmospheric disruption is a new meteorological phenomenon, unseen on other planets. Because of this it is yet difficult to provide a confident physical interpretation," Peralta adds, "but we do not doubt that Akatsuki has helped to unveil a critical missing piece of the Venus puzzle."

While it will be the focus of future research, the authors suggest that this disruption may be the physical manifestation of an atmospheric wave of Kelvin type propagating trapped about the equator. The Kelvin waves are a class of atmospheric gravity waves2 that share important common features with this disruption like its downstream propagation (in the same sense as the super-rotating winds) and with no apparent effect over the meridional winds. The presence of Kelvin waves on Venus is also interesting because they can interact with other types of atmospheric waves like the Rossby waves3 which propagate upstream at mid-latitudes and give birth to instabilities able to transport momentum of the super-rotation to the equator.

Follow-up observations with NASA's Infrared Telescope Facility (IRTF) in Hawaii and the Nordic Optical Telescope (NOT) in the Canary Islands are being undertaken right now coordinated with observations from space with the Akatsuki orbiter, with the hope to provide new hints to answer all these questions.