For the first time, the distribution of wind speeds at the altitude of the clouds on Venus (Note 1) has been measured over both the day and night, providing an understanding of the mechanism for the high-speed atmospheric circulation and the average north-south circulation (Fig. 1).

It has been a 40 year mystery how the flow patterns on the cloud tops of Venus behaved during the night. Now, it has been revealed that a north-south wind moving in the opposite direction to that in the day is generated at night (Fig. 2).

Understanding the atmospheric circulation on a slow-rotating planet engulfed in thick clouds--a very different environment from that on Earth-will lead to the elucidation of the mechanisms that create diverse environments on terrestrial planets.

Venus hosts a fast easterly wind across the entire planet known as "super-rotation" (Note 2) that is not seen on Earth. In addition to this, the movement of clouds in the daytime observed in ultraviolet light flow from the equator towards both poles. However, it has been a mystery for 40 years how much of this second poleward flow is due to Hadley circulation (Note 3) and how much is due to winds peculiar to the thermal tides (Note 4).

A research group led by Kiichi Fukuya, a master's student at the University of Tokyo's Graduate School of Science, and Professor Takeshi Imamura of the University of Tokyo's Graduate School of Frontier Science, along with researchers from the University of Tokyo, Rikkyo University, Japan Aerospace Exploration Agency (JAXA) and other institutions, succeeded in visualizing the motion of the clouds covering Venus over both the day and night by analyzing infrared images captured by JAXA's Venus Climate Orbiter, Akatsuki (Note 5) (Fig. 1). This revealed that there was a nighttime flow towards the equator that was in the opposite direction to the motion during the day, clarifying the role of thermal tides (Fig. 2). The discovery also offers insight into the mechanism that drives super-rotation and the morphology of the Hadley circulation. Understanding how the atmospheric environment on Venus is maintained is a key factor in elucidating how planets differentiate into a variety of environments, and to understand conditions on planets with super-rotating atmospheres that are thought to be numerous outside the Solar System.

Venus is a planet that is a similar size to the Earth, with a dense atmosphere that is composed mainly of carbon dioxide with clouds of sulfuric acid at high altitudes. A 100 m/s global westward wind, known as super-rotation, whips around the cloud tops at an altitude of 65 km. Investigating the mechanics of an atmosphere that is very different from that on Earth allows insight into the processes that led to the creation of the different environments on each planet. In recent years, a number of planets with high altitude cloud cover, and planets whose atmospheres are thought to be super-rotating, have been discovered outside the Solar System. Venus is therefore attracting attention as a reference celestial body for researching conditions on these exoplanets.

The motion of the Venusian atmosphere has previously been estimated principally from a series of images of the clouds illuminated by the solar UV light during the day. The UV illuminates shades in the clouds corresponding to variations in chemical composition, which allows the clouds to be identified and tracked. This tracking revealed that in addition to the super-rotation, motion of the atmosphere of Venus includes a flow of about 10 m/s from the equator to both poles. At the time of its discovery about 40 years ago, this poleward flow was ascribed to Hadley circulation, a global atmospheric circulation in which atmosphere heated by sunlight at the equator rises and flows towards high latitudes. However, it has been pointed out in recent years that this motion also includes a contribution from thermal tides; a fluid wave caused by atmospheric heating by sunlight. The respective contributions from each mechanism has not been well understood.

The best way to monitor the motion of the clouds at night is to look at the infrared emitted by the clouds and track differences in cloud top temperature between locations. But the entirety of Venus has never previously been continuously photographed in the infrared, and a clear pattern in the infrared could not be seen. This research used cloud image data acquired approximately every hour for two years with the LIR thermal imaging camera onboard Japan's Venus Climate Orbiter, Akatsuki. In order to distinguish between temperature variations and noise, the noise was reduced by superimposing and averaging multiple images shifted to account for the movement of clouds due to the super-rotation of the atmosphere (Fig. 3). With this step, small temperature fluctuations in the cloud top of about 0.3℃ could be seen, allowing the movement of the atmosphere to be visualized (animations 1 & 2).

The resultant analysis revealed a flow in the nighttime cloud tops from both poles to the equator, contrary to that in the daytime. The motion occurred at the same speed as the daytime's reverse flow, resulting in almost no net north-south circulation when averaged over the day and night (Fig. 1 & 2). The equatorward flow at night was found to occur mainly from sunset to midnight. The velocity structure of the thermal tide was clarified for the first time based on the difference in the wind velocities with time. The thermal tide contains a large contribution from a periodic wave that includes two cycles in the east-west direction (semidiurnal tide) and transmits a force in the altitude direction (transporting the east-west momentum in the altitude direction), suggesting that this helps to maintain super-rotation. (Fig. 4).

Now that the structure of the Hadley circulation and thermal tide are known, future studies using numerical simulations of Venus's atmospheric physics can target reproducing these results. Additionally, the ability to observe the distribution of Venus's wind and cloud top temperatures over both the day and night has opened the possibility of tracking temporal changes due to different atmospheric phenomena, bringing a new method to Venus meteorology. The response of the atmospheric dynamics to the solar heating of the cloud layer revealed in this work is expected to play an important role in the atmospheres of other planets, such as generating super-rotation in the atmospheres of exoplanets. Further understanding can be achieved through collaborations between meteorology in the Solar System and the exoplanet science.

(Note 1) Venus
Venus is a planet with a rocky surface (terrestrial planet) and is the Earth's neighbor towards the Sun in our Solar System. The size and density of Venus are close to that of the Earth. The planet is the brightest object in the sky after the Sun and Moon, earning it the name "morning star" or "evening star". Due to the greenhouse effect resulting from a dense atmosphere rich in carbon dioxide, the temperature on the surface of the planet reaches about 460℃. Clouds of sulfuric acid exist at altitudes of 50 ~ 70km. The planet's rotation is extremely slow, with a rotation period of 243 days. However, the atmosphere moves around Venus in just 40 days, due to the high-speed easterly wind. The rapid wind speed compared to the planet's rotation is a phenomenon known as 'super-rotation'.

(Note 2) Super-rotation
A phenomenon in which the atmosphere of the planet circulates more rapidly than the planet rotates over a wide range in latitudes that includes the equator. On Venus, such winds are found at all latitudes, with the wind speed increasing with altitude from the surface and reaching a maximum speed of 100 m/s near the cloud-top region at an altitude of 70km. This is very different from winds on Earth, and the mechanism that causes such speeds is not well understood. Similar winds can be seen on Saturn's moon, Titan, and observations have pointed to the existence of super-rotation on exoplanets.

(Note 4) Thermal tide
Planetary atmospheres are heated by sunlight at a location directly below the Sun's position, which moves relative to the atmosphere at the planet rotates and the atmosphere circulates to cause planetary-scale fluid waves. Such a wave is known as a thermal tide and is widely observed on Earth and Mars, in addition to Venus. Thermal tides propagate both in the east-west and vertical direction, transferring momentum between different altitudes and accelerating/decelerating the average east-west wind. Unlike the so-called tide, the attraction of other celestial bodies such as the Moon is irrelevant to the thermal tide.

(Note 5) Akatsuki
Japan's Venus Climate Orbiter, Akatsuki, was launched in May 2010 and entered orbit around Venus in December 2015, after a five year delay due to trouble with the propulsion system en route to Venus. The orbiter is a meteorological satellite of Venus and performs continuous imaging observations of the atmosphere using five cameras that take images at different wavelengths from orbit. Akatsuki also conducts observations of the Venusian atmosphere using communication radio waves between its antenna and the Earth. Project website: https://akatsuki.isas.jaxa.jp/en/ 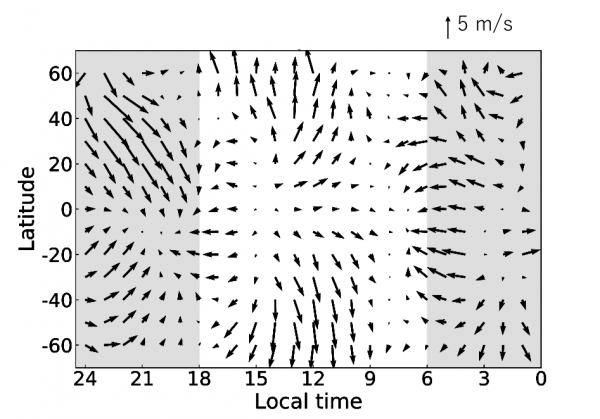 Figure 1: Distribution of the night-side wind speeds on Venus. This is shown for the first time in this research. Arrow length is proportional to the wind speed, and a length of 10 degrees in latitude corresponds to 5 m/s (adapted from Fukuya et al. 2021). 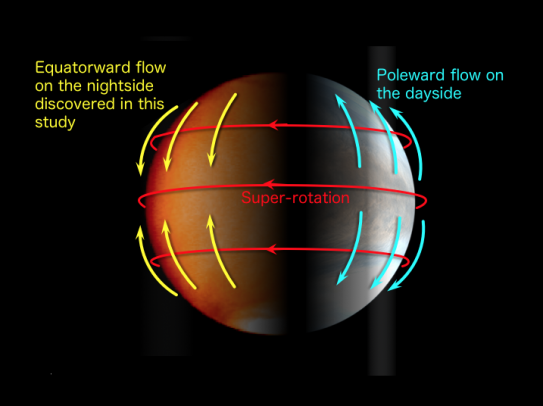 Figure 2: The newly revealed image of the circulation near the cloud layer of Venus. Poleward flow (light blue, on right) dominates on the planet day side, and the equatorward flow (yellow, left) dominating on the night side, overlapping with the super-rotation (red) across the entire planet. The poleward flow on the nightside--discovered through infrared observations in this work--cancels out the daytime flow towards the equator. The difference between the day and night flows is due to the thermal tides. The image of the day side of Venus was captured with the ultraviolet camera UVI onboard the Venus Climate Orbiter, Akatsuki, and the image of the nightside was taken by the infrared camera, LIR (Venus images provided by JAXA).

Video 1: Motion of clouds on the night side of Venus as seen in infrared. You can see the convergence of cloud patterns from high latitudes towards the equator.
https://drive.google.com/file/d/1e9IK2qVZJj240ZqVNAukMpdHWVLZ_hkA/view?usp=sharing

Video 2: Motion of clouds on the day side of Venus as seen in infrared. The cloud pattern now spreads from the equatorial region to high latitudes.
https://drive.google.com/file/d/1dbRL7tSrTvjMK1ILeNBENQqlYPB8MBUZ/view?usp=sharing