Using the Cooled Mid-Infrared Camera and Spectrometer (COMICS) on the Subaru Telescope, astronomers have detected an unidentified infrared emission band from comet 21P/Giacobini-Zinner (hereafter, comet 21P/G-Z) in addition to the thermal emissions from silicate and carbon grains. These unidentified infrared emissions are likely due to complex organic molecules, both aliphatic and aromatic hydrocarbons, contaminated by N- or O-atoms. Considering the properties of the dust and organic molecules, comet 21P/G-Z might have originated from the circumplanetary disk of a giant planet (like Jupiter or Saturn) where it was warmer than the typical comet-forming regions. 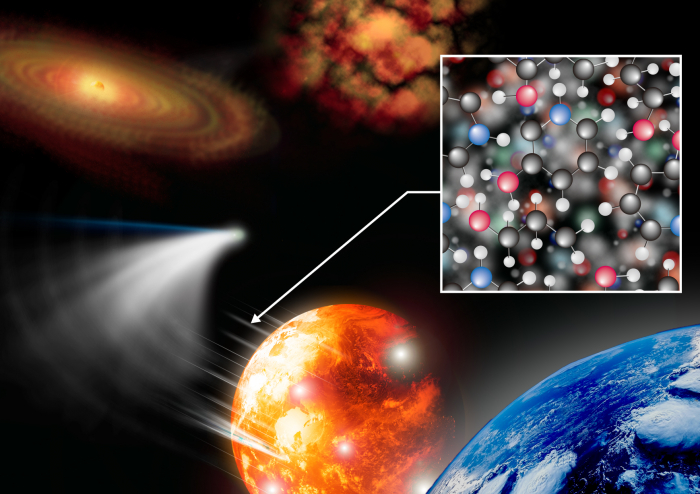 Figure 1: Comets are pristine remnants from the early Solar System. Comets are mostly made of ice and dust, but are also known to be rich in organic materials. If "complex" organic molecules like amino acids are enriched in comets and the meteoroids of cometary origin, the meteor showers might have delivered water and complex organic materials to the ancient Earth. (An artist's illustration. Credit: Kyoto Sangyo University)

Comet 21P/G-Z is a Jupiter-family comet with an orbital period of about 6.6 years and is thought to be the parent body of the October Draconids meteor shower. Compared to other comets, this comet is peculiar in terms of its volatile content (depleted in carbon-chain molecules, NH2, and highly volatile species) and the properties of its dust grains, and is categorized as "G-Z type" (~6% of surveyed comets). Based on previous studies, it was proposed that comet 21P/G-Z originated in a different region than other comets, but we didn't have any information about the specific region in the protoplanetary disk. A negative trend of linear polarization in the optical wavelength region is also reported for the dust continuum of comet 21P/G-Z. It is suggested that this negative wavelength gradient of polarization might be explained by a higher content of organic materials in the dust grains of 21P/G-Z. If complex organic molecules like amino acids are enriched in comet 21P/G-Z and in the meteoroids of the October Draconids, this meteor shower might have delivered complex organic materials to the ancient Earth. However, complex high-molecular-weight organic molecules have never been detected clearly in comets, except in comet 67P/Churyumov-Gerasimenko by the in-situ measurements of the Rosetta spacecraft. How much and how complex of organic molecules are contained in comet 21P/G-Z is still an open question. 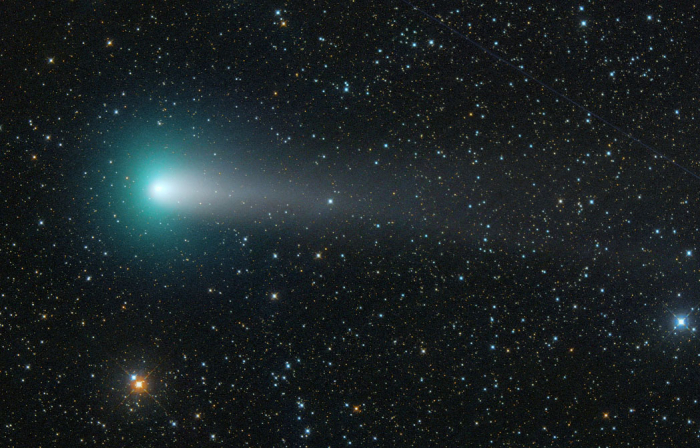 A team of astronomers from the Institute of Space and Astronautical Science, Japan Aerospace Exploration Agency (ISAS/JAXA), Kyoto Sangyo University (KSU), National Astronomical Observatory of Japan (NAOJ), and Okayama University of Science (OUS) conducted mid-infrared spectroscopic and imaging observations of comet 21P/G-Z using COMICS on UT July 5, 2005 (when the comet was 1.04 au from the Sun, near its perihelion). The obtained spectrum of comet 21P/G-Z shows emission peaks of crystalline silicate grains, which are usually also seen in many other comets. In addition to these silicate features, the researchers found that the spectrum of comet 21P/G-Z exhibits unidentified infrared emission features, which could be attributed to a mixture of aliphatic and aromatic hydrocarbons (such as polycyclic aromatic hydrocarbons or hydrogenated amorphous carbons contaminated by N- or O-atoms). 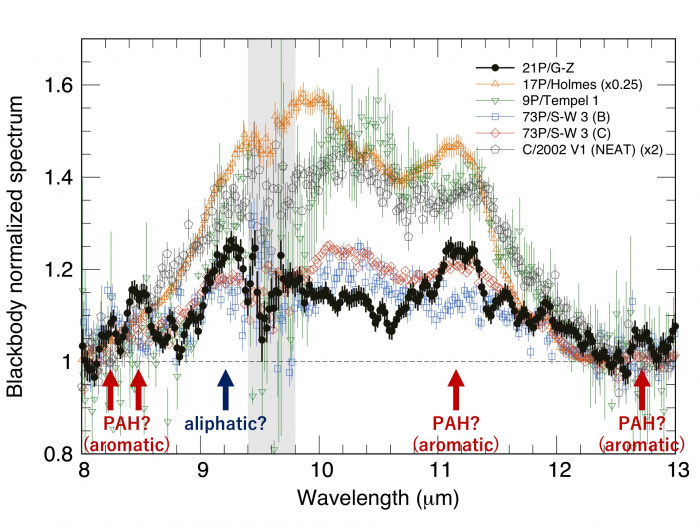 Figure 3: Blackbody normalized mid-infrared spectra of comets. The spectrum of comet 21P/G-Z (black filled circles) is different from other comets, and exhibits unidentified infrared emission features. The features at ~8.2 microns, ~8.5 microns, and ~11.2 microns could be attributed to PAHs (or HACs) contaminated by N- or O-atoms, although part of the feature at ~11.2 microns comes from crystalline olivine. The feature at ~9.2 microns might originate from aliphatic hydrocarbons. (Credit: Ootsubo et al.).

These results were published on November 18, 2019 in Icarus (Ootsubo et al., "Unidentified Infrared Emission Features in Mid-infrared Spectrum of Comet 21P/Giacobini-Zinner"). This research paper is also available as a preprint (Ootsubo et al., arXiv:1910.03485) on arxiv.org. This study is financially supported by MEXT Supported Program for the Strategic Research Foundation at Private Universities, 2014-2018 (No. S1411028). T.O. is supported by JSPS KAKENHI Grants-in-Aid for Scientific Research (C) JP17K05381 and (A) JP19H00725.