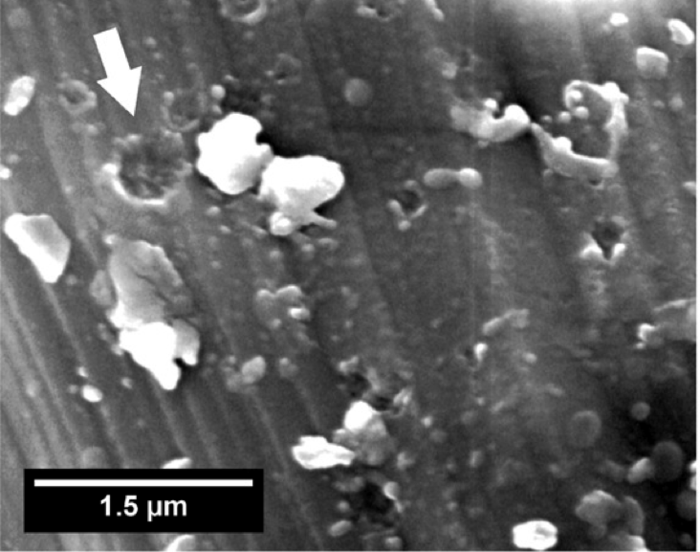 It is previously reported that precious few Itokawa particles show submicrometer craters on their surface. An international research team led by Dr. Dennis Harries (Friedrich Schiller University Jena) has investigated these craters in details using scanning electron microscopy and transmission electron microscopy. As a result of their observations, 15 craters were confirmed on a new particle. Though particles showing such craters had also been found in previous studies, those particles showed only 1-2 craters on their surface. Thus, the new particle found by the research team shows unusual number of craters on the surface of one particle.
Also, the research team found that the crater was secondary craters formed by fragments produced by the impact process of a tiny celestial body on the surface of asteroid Itokawa.

It was thought that the presence of such small craters is an indication that the particles had been exposed on the surface of Itokawa for a long time (10,000 years or more). However, this research revealed that craters are formed as secondary craters even on particles whose surface exposure time was 1,000 years or less. This type of impact phenomenon changes the reflectance spectrum of the surface of Itokawa, and thus this is likely one major mechanism causing progression of space weathering on Itokawa.

Dr. Masayuki Uesugi (SPring-8), one of the research team members, has this to say: "Craters like this are present even on particles of the asteroid Itokawa with extremely weak gravity and exposure time of the surface material of 1,000 years or less. We were able to clearly confirm that the craters were secondary formed by impact phenomenon of celestial bodies. This fact is extremely important for understanding the process of surface evolution on the surface of celestial bodies in the solar system."

In the initial stage of analyzing particles returned by Hayabusa, there were craters found to be the traces of impact in only one case. However, in the initial analysis stage, the mechanism which produced the craters was not clear.

Going forward, it may be possible, by investigating more craters in detail, to obtain important clues regarding the composition and size distribution of small celestial bodies which cannot be investigated through observation with telescopes and similar instruments.

According to Dr. Uesugi: "If we can understand the composition and size distribution of small celestial bodies, it may be possible to resolve questions about the difference in composition between meteorites and cosmic dust (mainly interplanetary dust particles, IDP) impinging on the earth.

Ordinary chondrites comprise the majority of meteorites, while IDP recovered in the earth's stratosphere are similar to carbonaceous chondrites containing hydrous minerals. Thus, compositions of the extraterrestrial materials found on the surface of earth vary depending on their size. Whether this is limited to objects which have fallen to earth, or whether it is true of the solar system in general, is a problem which also affects the chemical composition of all rock materials in the solar system (asteroids)."

These results were obtained through an international call for research on particles from the asteroid Itokawa, issued by the Astromaterials Science Research Group, Institute of Space and Astronautical Science, JAXA. This internationally solicited research is the open type whose purpose is to obtain greater scientific knowledge by issuing a broad appeal to researchers throughout the world for research themes. Previously a total of more than 40 research themes have been selected, and research using particles derived from the asteroid Itokawa is being carried out by researchers all over the world.

Global space news: NASA's Lucy mission is headed for the Jupiter Trojan asteroids.
Our researchers discuss what this new exploration of small bodies may find.