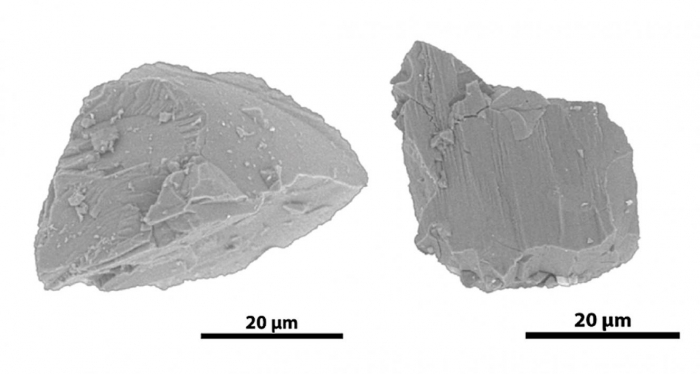 The two Itokawa particles studied by Jin and Bose are tiny: for comparison, a human hair is 100 to 500 microns in diameter. ASU's NanoSIMS instrument made it possible to extract information on the particles' water content.
Image by Z. Jin and M. Bose/ASU/JAXA

First-ever, scientists at Arizona State University have found clues of water in returned samples from asteroid Itokawa. This finding suggests that impacts early in Earth's history by similar asteroids could have delivered as much as half of our planet's ocean water.

The peanut-shaped asteroid Itokawa is classified as the S-type asteroid, which is one of the most common objects in the asteroid belt. Having the structure resembling a pair of rubble piles crunched together, researchers believe that Itokawa is the remnant of a parent body which is at least ten times larger than Itokawa. Despite the catastrophic breakup of the parent body, the minerals in the Itokawa samples still show evidence of water that has not been lost to space. Surprisingly, the minerals show hydrogen isotopic compositions very similar to those of Earth. This research results mean S-type asteroids and the parent bodies are likely one of the critical sources of Earth's water.