Very generally speaking, there are two ways that a supernova explosion can take place, and the proportion of chemical elements that are produced depend on the supernova type. Lighter elements, like oxygen and magnesium, originate mainly from the explosions of very massive stars, more than ten times the size of our Sun, at the end of their lifetimes. These are known as "core-collapse supernovae". Smaller stars instead usually end their life cycles as "white dwarves", a small fraction of which can explode as a "thermonuclear" or "type Ia" supernova if they later accrete matter from a companion star, causing the white dwarf to become unstable to the pull of its own gravity. Heavier atoms like iron and nickel mostly come from this latter type of supernovae. To make up the chemical composition of our Solar System, for instance, we require a mixture of roughly one thermonuclear for every five core-collapse supernova explosions. JAXA research fellow Aurora Simionescu wanted to find out whether the average chemical composition of the Universe was similar to that of our Solar System, or whether our local neighbourhood was, after all, a special place.

Actually, perhaps counterintuitively, the answer to this question is best found not by looking at the stars themselves, but rather looking at the intergalactic space. That is because most of the normal matter in the universe, and thus also most of the metals, are presently not contained in stars, but rather in a very hot, diffuse gas that fills the space between galaxies, and is so hot that it shines in X-ray light. The brightest X-rays come from so-called clusters of galaxies, the places in the Universe where the galaxies are packed closest together.

"I've found this idea fascinating ever since the first year of my PhD: X-raying the chemical content of our Universe", says Aurora Simionescu. But back then, almost 10 years ago, it was very hard to obtain reliable measurements of the metal abundances except for the very densest, brightest parts of the intergalactic medium, due to a lack of X-ray photons and high background noise. So, we could only really probe the chemical composition of roughly the central one-thousandths of the typical volume of any given galaxy cluster.

JAXA's Suzaku X-ray satellite dedicated a great amount of observing time, collecting data over many weeks, to address this problem. The first such deep observations, targeting the brightest system, the Perseus Cluster, allowed remarkably detailed measurements of the iron abundance in the intra-cluster medium on large scales. However, information about chemical elements predominantly produced by core collapse supernovae was still missing.

For such measurements, observations of a galaxy cluster with a lower average temperature were needed, in order for the emission from lighter elements to be comparatively stronger than in the Perseus Cluster. Suzaku therefore spent about two weeks looking at the Virgo Cluster, the nearest and second brightest cluster in the X-ray sky, which has such a suitably low temperature. With this new data set, Simionescu and her colleagues at JAXA and Stanford University succeeded to detect not only iron but for the first time also magnesium, silicon and sulphur all the way to the edge of this galaxy cluster. Their results are reported in a study published recently in the Astrophysical Journal.

"What we found was that the ratios between the abundances of iron, silicon, sulphur, and magnesium, are constant throughout the entire volume of the Virgo Cluster, and indeed roughly consistent with the composition of our own Sun and most of the stars in our Galaxy", explains Dr. Norbert Werner from Stanford University, a co-author of the article. Galaxy clusters cover such a large volume that the content of each such object is believed to be representative for the rest of the Universe as well. The new Suzaku finding means that the chemical elements in the cosmos are very well mixed, with a chemical composition that remains the same from scales of the solar radius (hundreds of thousands of kilometers) to the size of a cluster of galaxies (several million light years). Although there may still be a few special places in the Universe that retain a different chemical make-up, on average, the bulk of the Universe has a very similar composition to our local neighbourhood -- the same raw soup of elements that is necessary for life like ours is found, wherever you look.

"The Suzaku satellite has opened a brand new window on the Universe and shown us that wherever you look, over vast scales, the mix of chemical elements is essentially the same" said Steven Allen, Professor of Physics at Stanford University and co-author of the study. "It's a beautifully simple result, and another step in understanding how the Universe around us came to be." 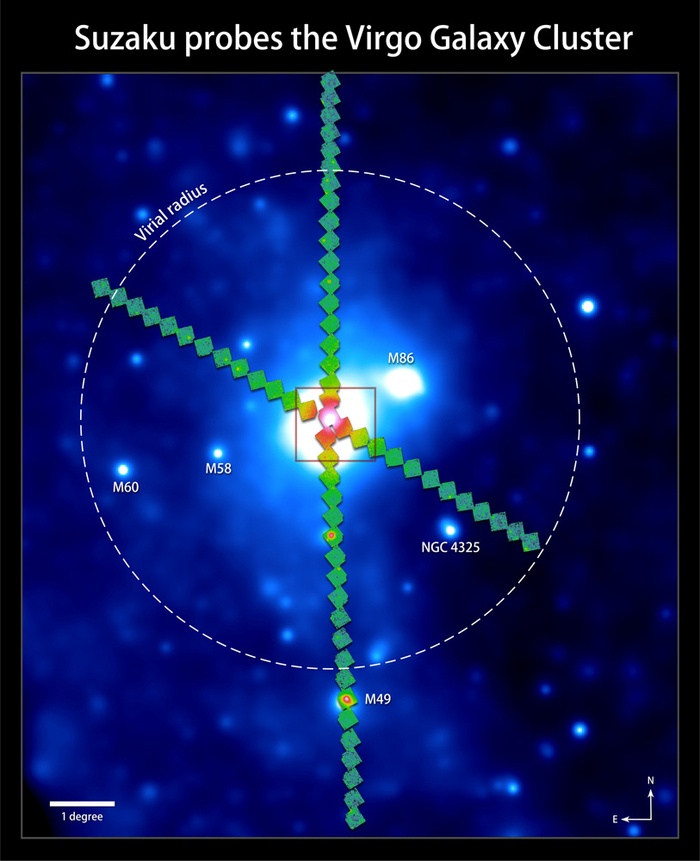