By the observations from the Japan-led Suzaku X-ray satellite adn the European Space Agency's infrared Herschel Space Observatory, scientists have discovered the first proof that a fierce outward "wind" is produced when a huge black-hole consumes a large mass of material, and the wind is source of outflow of matter at the galaxy scale.

Detail analysis of spectral data acquired from Suzaku's on-board CCD camera found that active galactic nucleus are blown out from near-edge of a center huge black-hole every year at equivalent of 1.5 solar mass and at about 30% of light speed. They further describe that the black-hole's activity is responsible for blowing star-forming gas out of the galaxy's central regions. When the black hole shines at its brightest, the researchers say, it's also effectively clearing gas and dust from the galaxy's central regions and shutting down star formation there. The scientists think the observed galaxy known as IRAS F11119+3257 represents an early phase in the evolution of a quasar, a type of black-hole-powered galaxy with extreme luminosity across a broad wavelength range.
This research outcome indicates that the black-hole's activity in galactic center is a key to understand the evolution of the host galaxy.

This research outcome is published in the March 26 edition of Nature. 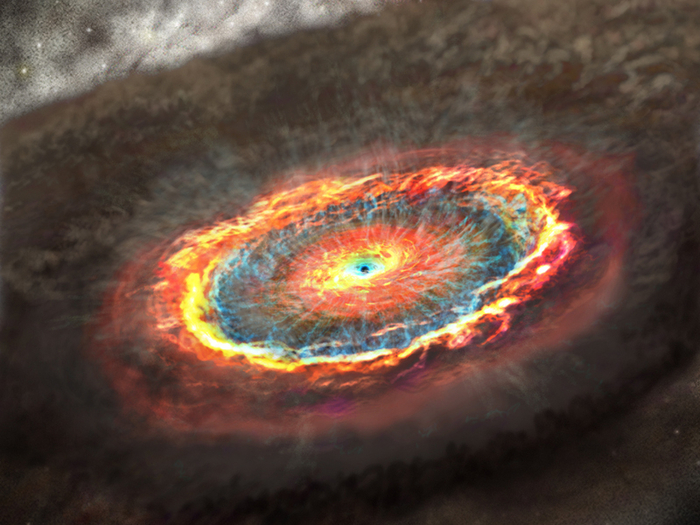 An artist's rendering of an appearance around the central black-hole in a galaxy known as IRAS F11119+3257. As material enters the black hole, it creates friction and radiates electromagnetic waves. It is considered that the radiation pressure pushes out material, and active star formation begins as the material collides with the surrounding material.