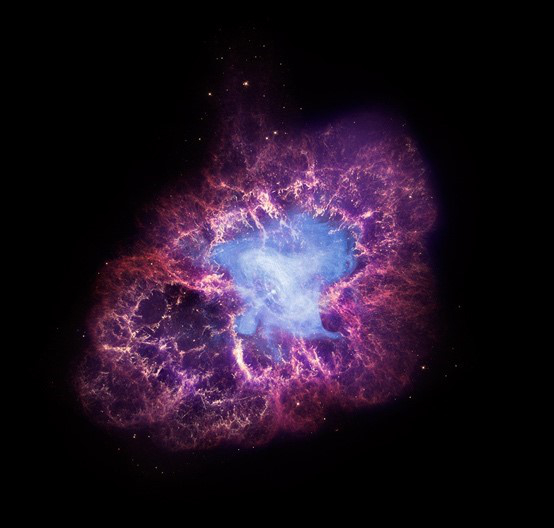 Composite image of the Crab Nebula and pulsar at multiple wavelengths (credit: NASA)

The results from an international campaign to simultaneously observe the "Crab Pulsar" using a combination of the X-ray telescope, NICER, mounted on the International Space Station (ISS), and radio telescopes at the JAXA Usuda Deep Space Center and NICT Kashima Space Technology Center, have been published online in the US journal "Science" on April 9, 2021 (JST).
A description of the findings is as follows.

An international research group, including researchers from JAXA and RIKEN, have discovered that the "giant radio pulses" emitted by the Crab pulsar include an increase in X-ray emission, in addition to the previously observed emission in radio and visible light. This discovery was made through coordinated observations of the Crab pulsar at a range of different frequencies, including radio measurements made with the 64m-diameter radio telescope at the JAXA Usuda Deep Space Center. The findings, published in Science, imply that these pulses are hundreds of times more energetic than previously believed and could provide insights into the mysterious phenomenon of "fast radio bursts (FRBs)."

Giant radio pulses－a phenomenon where extremely short, millisecond-duration pulses of radio waves are emitted－have been observed in association with a dozen pulsars in our Galaxy, but little is known about the mechanism that causes them. It has been proposed that they may also be the origin of "fast radio bursts"－rapid bursts of radio waves that are believed to originate from energetic events in the extragalactic universe.

To gain insights into these phenomena, the team made coordinated observations of the Crab pulsar, one of the most famous and well-observed pulsars. The explosion of this star as a supernova was witnessed by Chinese and Japanese observers in the year 1054 and led to the formation of the beautiful Crab Nebula that can still be seen today.

The group began looking to see if there was an increase in X-ray emissions associated with giant radio pulses. In fact, despite numerous observations for several decades, researchers had so far been unable to make any unambiguous detections. The observations were based on a coordinated international campaign of simultaneous space-based X-ray and ground-based radio observations, with the space-based observations done with NICER, a new instrument placed aboard the International Space Station, and the radio observations done with the Usuda 64m antenna and Kashima 34m antenna in Japan. Over a three-year period, the group continued the campaign, and eventually found a clear, "five-sigma-exceeding" signal indicating an enhancement of X-ray emissions associated with the increase at the radio wavelength. The enhanced emission detected in the X-ray band was similar to that previously reported in the visible band, but nothing similar has ever been observed from any of the other 2,800 known pulsars.

The discovery is also expected to be an important contribution to understanding the mysterious fast radio bursts (FRBs) that occur in distant space. FRBs are a new type of celestial phenomenon that was discovered in archival astronomical data and have become one of the hottest themes in astronomy over the last few years. As giant radio pulses (GRP) are a similar phenomenon to FRBs, it has been proposed that a single theoretical model could explain both processes. However, these new observation of X-ray emission reveal that more energy than previously thought is emitted by GRPs, making it difficult to explain the FRB with a simple GRP model. On the other hand, bursts of activity from neutron stars which have an exceptionally strong magnetic field (magnetars) are another, promising candidate for the FRBs. This result therefore provides important insights for investigating whether GRPs may also be generated by young and active magnetars through multiwavelength observations of radio waves and X-rays.

The two Japanese radio telescopes used in this study were the JAXA Usuda Deep Space Center 64m antenna in Saku City, Nagano Prefecture, and the National Institute of Information and Communication Technology (NICT) Kashima 34m antenna in Kashima City, Ibaraki Prefecture. For data acquisition with the two radio telescopes, JAXA and NICT jointly developed the "wide-band digital signal recorder" which can achieve highly accurate data reception. The Usuda 64m antenna is also the heart of operational support for spacecraft, including the asteroid explorer, Hayabusa2. The Kashima 34m antenna has been an important observational instrument in radio astronomy but was severely damaged by Typhoon No. 15 in 2019 and has now been decommissioned. This research was therefore one of the valuable final achievements of the Kashima 34m radio telescope. 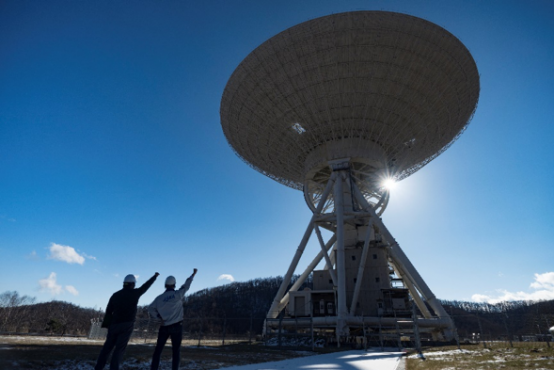