The Japan Aerospace Exploration Agency (JAXA) launched the SS-520-3 Sounding Rocket for the purpose of "research on the ionised atmospheric outflow phenomena in the polar cusp region".

The weather at the time of launch was sunny, with a wind speed of 3 m/s in the south-west direction and temperature of -8 degrees celsius.

This concluded the experiment for the SS-520-3 Sounding Rocket. In this experiment, the sounding rocket was launched towards a region known as the polar cusp in the high-latitude ionosphere. The rocket was equipped with instruments for observing electrons, ions and the electromagnetic field. Observations using radar and aurora imaging cameras were additionally installed on the ground. The purpose was to elucidate the current plasma outflow phenomena in the polar cusp region.

The observation results obtained in the experiment will be analysed in detail, and the results published in academic journals.

We would like to express our sincere appreciation for the support from the Norwegian Space Agency (NOSA) and everyone who was involved in the launch of SS-520-3 Sounding Rocket.

Study of the ionised atmospheric outflow process that occurs over the polar cusp.
The purpose of this project is to elucidate the plasma outflow phenomena that occurs in a region known as the cusp in the high-latitude ionosphere. The polar cusp is the region where Earth's magnetic field is weak and the solar wind can penetrate deep into our atmosphere. Sounding rockets are launched into the cusp to make measurements of the electrons, ions and electromagnetic field, and combined with data from ground-based radar and aurora imaging cameras.

This experiment is one of nine planned missions that are part of the Grand Challenge Initiative-CUSP, an international joint observation project.

※Grand Challenge Initiative: An international research collaboration consisting of nine countries that aims to elucidate issues in space and Earth science. Of these, Project-CUSP is a campaign to study the cusp region by Japan, Norway and the USA.

Background to the experiment
Plasma particles emitted from the Sun (solar wind) that reach the Earth can enter the polar cusp region along the magnetic field lines. When these plasma particles reach the upper atmosphere (ionosphere) at an altitude of about 500km or more above the polar region, the energy of the particles generates waves in the ionosphere which heat and accelerate the atmospheric ions. This is thought to create a flow of particles from the ionosphere into space.

By launching a sounding rocket from the Svalbard Rocket Range in Norway, the rocket can reach the cusp region where the atmospheric ions in the ionosphere are being heated and accelerated.
This allows the direct measurement and observation of the heating and acceleration of ions due to the interaction between the atmospheric ions and waves above the Arctic Circle for the first time in the world. 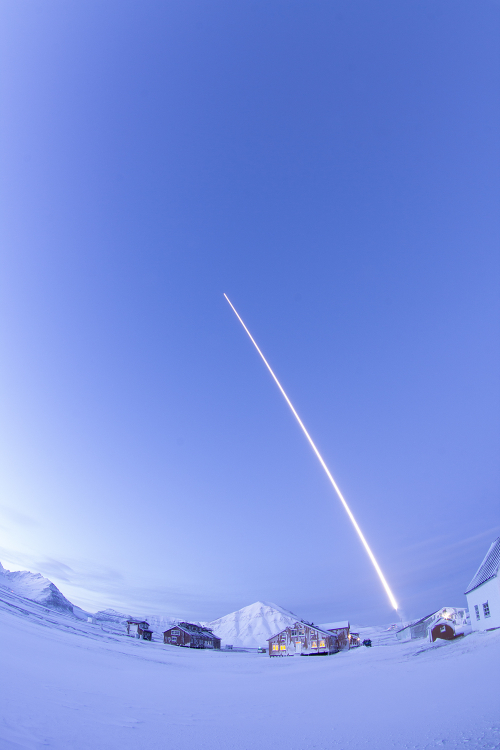 The world's first space flight for the rotating detonation engine, and a glimpse at a new sample return capsule