The Japan Aerospace Exploration Agency (JAXA) and European Space Agency (ESA) have measured the trajectory of the Mercury Magnetospheric Orbiter, known as "Mio," and the Mercury Planetary Orbiter (MPO) following the Venus flyby on October 15, 2020. The two probes are cruising to Mercury as a composite spacecraft as part of the international BepiColombo*1 mission to explore the innermost planet. We are pleased to announce that the spacecraft is traveling smoothly along the target trajectory.

The October 15 Venus flyby was the first carried out by BepiColombo. The closest approach to Venus occurred at 12:58:31 JST at an altitude of 10,721.6 km (Figure 1, right). The gravity of Venus was used to decelerate the craft by about 3.25 km/s, the target value. The ESA deep space tracking station network for spacecraft operations has confirmed that the status of Mio and all other components of the spacecraft is currently normal.
Before and after the Venus flyby, observations were performed with the instruments installed onboard BepiColombo. The Mercury Monitoring Cameras (MCAM) mounted on the Mercury Transfer Module (MTM) captured the appearance of Venus during the time of closest approach (Figure 2).

In parallel with the Venus flyby by BepiColombo, joint observations of Venus were performed with the JAXA Venus climate orbiter, known as "Akatsuki," which is the only satellite currently orbiting Venus, as well as by the JAXA spectroscopic planet observatory, dubbed "HISAKI," which is orbiting the Earth (Figure 1, left). This is the first time that three of Japan's spacecraft missions have jointly realized simultaneous planetary observations. Before and after the flyby, Venus was imaged with the ultraviolent imager and long-wave infrared camera mounted on Akatsuki every one to two hours, observing the structure of the sunlit clouds (ultraviolet) and temperature distribution of the cloud tops (long-wave infrared) (Figure 3)*2. Spectroscopic observations of the Venusian upper atmosphere in extreme ultraviolet were carried out by HISAKI for one week before and after the flyby.

The scientific instruments installed on Mio also observed the solar wind and plasma environment around Venus. Figure 4 shows results from observations on October 15, 2020, between 03:00 and 06:20 UTC. The Mercury Plasma Particle Experiment (MPPE) revealed that the distribution of electrons around Venus differs from that in the solar wind and identified the existence of ions believed to originate from Venus (plasma sheet). We confirmed that the Plasma Wave Investigation (PWI) can measure signals even under the limited configuration adopted until the spacecraft's arrival at Mercury.Since much remains unknown about the plasma environment surrounding Venus, the observations taken by Mio during the flyby provide valuable data*3.

Through joint observation by the three missions, simultaneous observations of the plasma environment surrounding the atmosphere of Venus have been realized*4. Further analysis through combining the observational data sets is expected to lead to new insights concerning Venus that were not previously obtainable.

In addition to regular functions checks, BepiColombo is planned to carry out scientific observation operations during future planetary flybys and while cruising through interplanetary space. A second flyby of Venus on around August 10, 2021 is the next such scheduled event, with the closest altitude planned to be about 550 km. 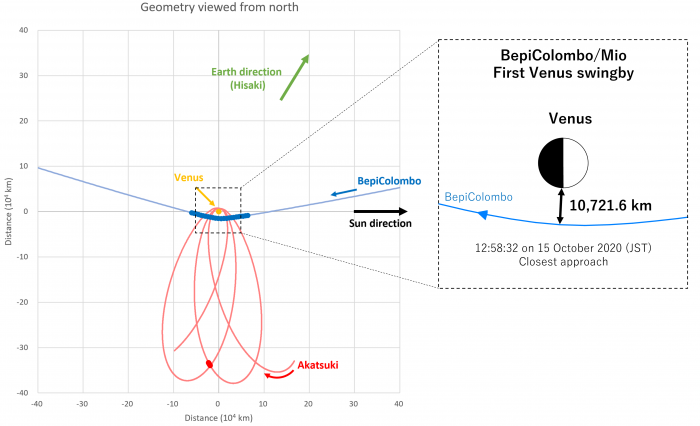 Figure 1: Relative positions of BepiColombo, Akatsuki and HISASKI before and after the Venus flyby. 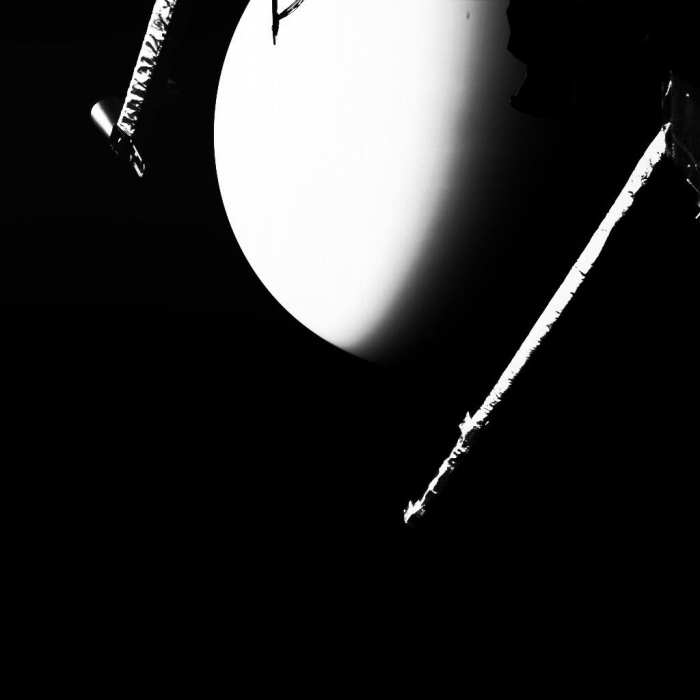 Figure 2: Venus captured by MCAM onboard the MTM just before the closest point of the flyby (credit: ESA/BepiColombo/MCAM)

Figure 3: Venus captured by the UV imager and long-wave infrared camera onboard Akatsuki at around 13:00 JST on October 15, 2020
(credit: Planet-C Project Team). 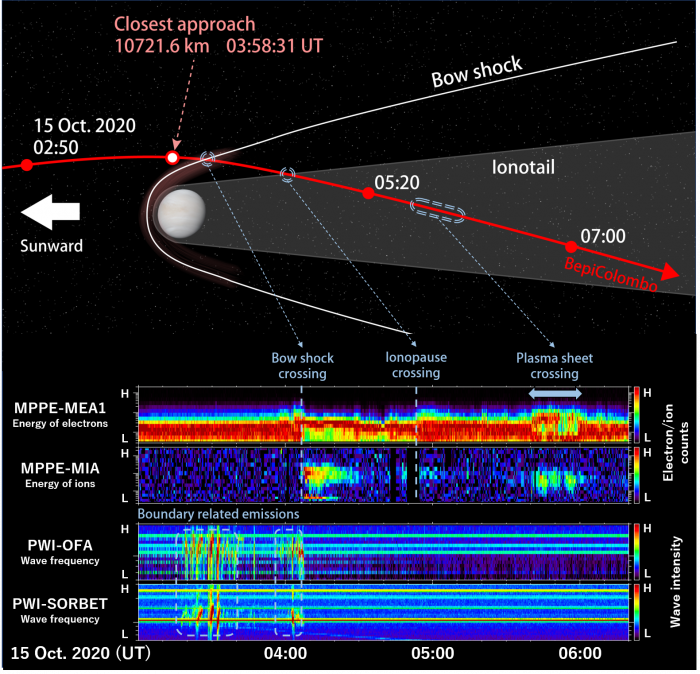 *1: The international Mercury exploration mission, BepiColombo
This is a large joint mission between Japan and Europe to comprehensively observe Mercury through the use of two orbiting spacecraft. The two orbiters are the Mercury Magnetospheric Orbiter (MMO) developed by the Japan Aerospace Exploration Agency and the Mercury Planetary Orbiter (MPO) developed by the European Space Agency. The Ariane 5 rocket carrying the two spacecraft launched on Friday, October 19, 2018 at 22:45:28 (local time) (Saturday, October 20, 10:45:28 JST) from the Kourou Space Center in French Guiana. The rocket flew normally and the two spacecraft successfully separated about 26 minutes and 47 seconds after launch.
BepiColombo will arrive at Mercury in about seven years and will put the first two satellites ever into orbit around the planet. This will be done by the separation of the electric propulsion module, which will have finished its role, after which first Mio then the MPO will be inserted into orbit and will begin making scientific observations.

*2: Supplementary information on the Akatsuki observations
The ultraviolent image is a pseudo-color composition image created from two types of Venus observation data taken at 13:01 and 13:05. Since we are observing the reflection of sunlight, only the planet's dayside hemisphere is bright, with shading on that side giving an indication of the amount of material in the clouds (darker shading indicates more clouds). The mid-infrared image is data taken at 13:08, with the temperature distribution colored like a thermograph. It shows the daytime and nighttime temperature at the cloud tops. (Akatsuki mission website: http://akatsuki.isas.jaxa.jp/en/）

*3: Supplementary information on the observation by Mio
Unlike the Earth, Venus does not host a magnetic field and the solar wind therefore acts directly on the planet to form a shockwave front and ionospheric tail region. Examination of the electron energy distribution revealed that the interaction with Venus at the inner surface of the shockwave generates a more complex distribution compared to that in the stable solar wind. Moreover, since the ions travel almost linearly in the solar wind, they should be blocked from Mio's detectors by the sunshield surrounding the spacecraft. But the complex movements generated within the shockwave surface caused some ions to penetrate the shield and be detected. Plasma observations in the tail region of the Venusian ionosphere are still rare, making these observations valuable for understanding the effect of solar winds on celestial bodies that do not have a magnetic field. There is also the possibility that the signals observed during the flyby may have related to the boundary crossing. We plan to clarify the origin of these signals in future analysis.

*4: Supplementary information on the coordinated observation by BepiColombo, Akatsuki and HISAKI is available from the link below. （http://cosmos.isas.jaxa.jp/bepicolombo-is-set-for-science-as-the-spacecraft-performs-a-venus-swing-by/）

BepiColombo grazes Venus in a second swing-by, at an altitude of just 550 km