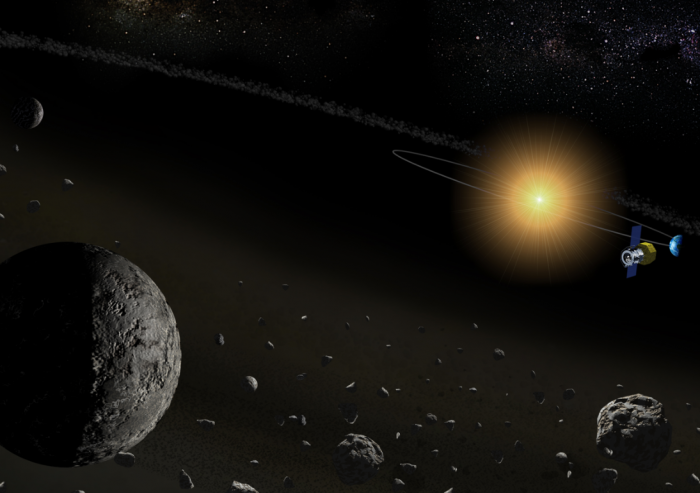 Figure 1: An artist's illustration of the near-infrared spectroscopic observation of asteroids with the infrared satellite AKARI. By using a space-borne telescope, the team was able to successfully detect the presence of water in many asteroids.

Using the infrared satellite AKARI, a Japanese research team has detected the existence of water in the form of hydrated minerals in a number of asteroids for the first time. This discovery will contribute to our understanding of the distribution of water in our solar system, the evolution of asteroids, and the origin of water on Earth. The findings were made by the team led by the Project Assistant Professor Fumihiko Usui (Graduate School of Science, Kobe University), the Associate Senior Researcher Sunao Hasegawa, the Aerospace Project Research Associate Takafumi Ootsubo (Institute of Space and Astronautical Science, Japan Aerospace Exploration Agency), and Professor Emeritus Takashi Onaka (Graduate School of Science, University of Tokyo). The results were published on December 17 in the online Advanced Access edition of Publications of the Astronomical Society of Japan.

Our Earth is an aqua-planet, and is the only planet in our solar system where the presence of water on the planet surface has been confirmed. We are, however, not yet sure how our Earth acquired water. Recent studies have shown that other celestial bodies in our solar system have, or used to have, water in some form. Asteroids are considered to be one of the candidates that brought water to Earth. Note that the liquid water is not flowing on the surface of asteroids, but water is retained in asteroids as hydrated minerals, which were produced by chemical reactions of water and anhydrous rocks that occurred inside the asteroids, that is, aqueous alteration. Hydrated minerals are stable even above the sublimation temperature of water ice. Thus, by looking for hydrated minerals, we can investigate whether asteroids have water.

Infrared wavelengths contain characteristic spectral features of various substances, such as molecules, ice, and minerals, which cannot be observed at visible wavelengths. Therefore, it is indispensable to observe at infrared wavelengths for the study of solar system objects. Hydrated minerals exhibit diagnostic absorption features at around 2.7 micrometers. The absorption of water vapor and carbon dioxide in the terrestrial atmosphere prevents us from observing this wavelength with ground-based telescopes. It is absolutely necessary to make observations from outside of the atmosphere, that is, in space. However, observations with space-borne telescopes have been scarce; the Infrared Space Observatory (ISO), launched in 1995, did not have a sufficient sensitivity to make spectroscopy of faint asteroids and the Spitzer Space Telescope, launched in 2003, did not have a coverage of this wavelength range. For this reason, it has not fully been understood how much water is contained in asteroids.

The Japanese infrared satellite AKARI, launched in February 2006, was equipped with the Infrared Camera (IRC) that allowed us to obtain spectra at near-infrared wavelengths from 2 to 5 micrometers. Using this unique function, the spectroscopic observations of 66 asteroids (figure 1) were carried out and their near-infrared spectra were obtained. This provides the first opportunity to study the features of hydrated minerals in asteroids at around the wavelength of 2.7 micrometers.

The observations detected absorption, which were attributed to hydrated minerals for 17 C-type asteroids (figure 2). C-type asteroids, which appear dark at visible wavelengths, were believed to be rich in water and organic material, but the present observations with AKARI are the first to directly confirm the presence of hydrated minerals in these asteroids. The absorption strength detected at around 2.7 micrometers varies for each asteroid, and some show absorption features of other substances, such as water ice and ammonia-rich material at around 3.1 micrometers.

When examining C-type asteroids in more detail, the research team discovered a clear relationship between the wavelength of the deepest absorption and the depth of the absorption for the 2.7 micrometers feature (figure 3). This shows a trend seen in the process where hydrated minerals are being heated up and gradually losing water. The heating energy could be supplied by the solar wind plasma, micrometeorite impacts, or the decay heat from radioactive isotopes in the rocks. This trend had been predicted by meteorite measurements, but this is the first time that it has been confirmed in asteroids. Many C-type asteroids display this trend, suggesting that C-type asteroids were formed by the agglomeration of rocks and water ice, then aqueous alteration occurred in the interior of asteroids to form hydrated minerals, and finally C-type asteroids were heated and dehydrated.

On the other hand, rocky S-type asteroids were considered to not contain water, unlike C-type asteroids. In the present study, hydrated minerals were not detected in most S-types, but it was newly discovered that there are exceptional cases of a few asteroids that show slight signs of hydrated minerals. The signs of water found in such S-type asteroids were probably not generated by aqueous alteration as in C-types, but were produced by collisions of other hydrated asteroids, that is, it is the exogenous origin that brought about the hydrated minerals. Asteroid collisions with each other occasionally occur. At the early stage of the solar system formation, a number of small bodies including asteroids were larger than the present, and collisional events must have been more frequent. From the fact that Earth would have experienced collisions with many asteroids, it is imagined that at least some amount of water on Earth was brought from asteroids by such collisions.

This study has confirmed the presence of water in asteroids. Spectra of the observed asteroids show common patterns. The size and the distance from the sun of the asteroid can be considered as important factors making differences of the spectra. To fully understand the observed patterns, it is necessary to accumulate observations of more asteroids as well as to compare with the measurement of meteorites collected on Earth. Dr. Usui comments: "By solving this puzzle, we can make a significant step towards identifying the source of Earth's water and unveiling the secret of how life began on Earth".

AKARI completed its operation in November 2011. For the next opportunity to perform spectroscopy in 2.7 micrometer wavelength with space-borne telescope, we will have to wait until the launch of the James Webb Space Telescope by NASA, scheduled in 2021.

Currently, the Japanese asteroid explorer Hayabusa2 and the American OSIRIS-REx are surveying asteroids (162173) Ryugu and (101955) Bennu, respectively. Each explorer has a capability to make measurements in the 2.7 micrometer range to look for the signature of water. "In-situ" observations of asteroids with spacecrafts can provide detailed information about craters and topography, aspects that ground-based and Earth-orbiting telescopes cannot reveal. The present results significantly help increase the scientific values of the data obtained by the explorers and understand the properties of asteroids Ryugu and Bennu in details. 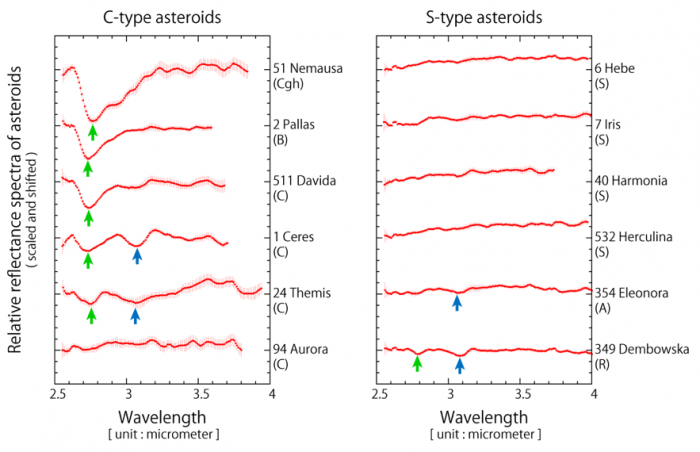 Figure 2: Near-infrared spectra of asteroids obtained from the AKARI observations. This shows 6 examples for both C-type and S-type asteroids. You can clearly see the absorption at wavelengths of around 2.7 micrometers (indicated by the green arrows) attributed to hydrated minerals. You can also see signatures of water ice or ammonia-rich material at around 3.1 micrometers (indicated by the blue arrows). The data shown in this figure are the reflected spectra of the sunlight by the surface of asteroids. 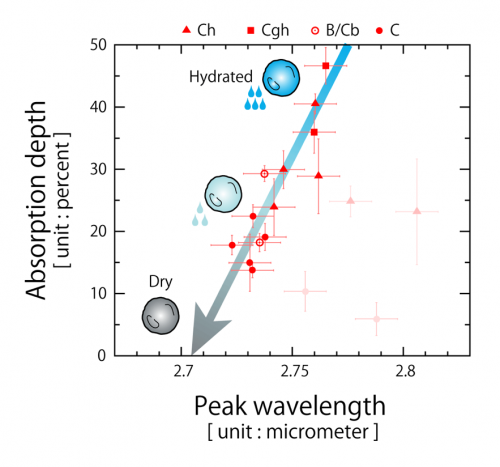 Figure 3: The relationship between the depth of absorption and the peak wavelength of the deepest absorption for the feature at around 2.7 micrometers in C-type asteroids (shown by the green arrows in figure 2). The different marks show differences of subgroups in the types of C-type asteroids (based on the Bus-DeMeo taxonomic classification). The trend of 13 asteroids from top right to bottom left indicated by the arrow can be understood in terms of the dehydration process. Four asteroids with the thin red symbols deviate from the general trend. A further follow-up investigation is required for understanding the nature of these outliers.

Journal :
Publications of the Astronomical Society of Japan