The observations made by the Soft X-ray Spectrometer (SXS) flown on the X-ray astronomical satellite ASTRO-H ("Hitomi") show that the proportions of iron-peak elements in the Perseus cluster are nearly identical to those measured in the Sun, unlike previously believed. The new research results suggest that the solar abundance of the chemical elements represents the average values of the neighboring universe. In addition, this study provides new insights into the mechanism of Type Ia supernova explosions, which are thought to be the major producers of the iron-peak elements. The SXS developed jointly by NASA and the Japan Aerospace Exploration Agency (JAXA) and their partners in Europe has provided an unprecedented detail of chemical make-ups of the hot gas in the neighboring universe.

The results are to be published in Nature online on November 13, 2017.

Hot plasma in the clusters of galaxies has been intensively investigated to derive its chemical abundances. However, previous estimations are disputed because existing instruments did not have sufficient spectral resolution, and the characteristic X-ray emission of nickel is mixed with the strong characteristic X-ray emission of iron. This hampers the accurate measurements of the abundances of nickel and iron.

A research team led by Hiroya Yamaguchi (University of Maryland and Goddard NASA) and Kyoko Matsushita (Tokyo University of Science) analyzed data from the center of the Perseus cluster observed by ASTRO-H and successfully estimated the abundances the iron-peak elements based on the individual strengths of their characteristic X-rays. The unprecedented high-energy resolution of SXS enabled the resolution of the characteristic X-rays of iron and nickel. Moreover, the team was able to detect weak chromium and manganese emission lines. The analysis showed that the abundance ratios of silicon, sulfur, argon, calcium, chromium, manganese, iron, and nickel are all same as those of the Sun despite these abundance ratios being believed to be higher than the solar value.

The target object, i.e., the Perseus cluster, is located 240 million light years from our solar system and is one of the most massive clusters in the neighboring universe and the brightest cluster in X-rays. The temperature of its hot plasma reaches 50 million degrees Kelvin. The SXS observed the central region of the Perseus cluster wherein elliptical and S0 galaxies are dominant. Conversely, the Sun is located in a spiral galaxy: the Milky Way. This new result reveals a consistency between the abundance patterns of the iron-peak elements in the Sun and those in the Perseus cluster. This indicates that the characteristics of the explosions of Type Ia supernova are similar in today's universe, irrespective of the types of their host galaxies (spiral, elliptical, or S0) with different chemical enrichment histories.

These research results also provide new insights into the mechanism of Type Ia supernova explosions. Type Ia supernovae entail the destruction of a white dwarf star, a compact remnant of an intermediate mass star such as the Sun. The mass of a white dwarf star is estimated to be 0.17-1.33 solar masses and is stable on its own. It can undergo a runaway thermonuclear explosion in two cases. First, if it accumulates mass due to the transfer of gas from a companion star in a binary system, its core can reach the limit of ignition for catastrophic nuclear fusion. Second, a blast occurs if it merges with a companion white dwarf star, i.e., a merger of two white dwarf stars. The limit mass of the explosion is different in the two cases, and different masses produce different amounts of iron-peak metals. In the former case, the explosion occurs at the stability limit mass, i.e., approximately 1.4 solar masses and the abundance ratios of manganese and nickel relative to iron become similar or marginally higher than the solar values. In the latter case, the explosion occurs at a mass smaller than the limit mass, resulting in abundance ratios higher than those of the Sun. To explain the abundance patterns of the iron-peak elements measured in the center of the Perseus cluster, both types of Type Ia supernova explosions have to be considered.

The ASTRO-H expedition unexpectedly ended in merely a month after its launch. JAXA is currently working to regain the science capabilities lost in the ASTRO-H mishap and executing a plan called the X-ray astronomy recovery mission (XARM) in collaboration with domestic and overseas universities and agencies, including NASA. One of its instruments will have capabilities similar to those of the SXS onboard ASTRO-H. Scientists working for XARM expect to uncover the chemical enrichment history of the universe by measuring the chemical make-up of supernova remnants (production sites of elements) and the abundances in the clusters of galaxies. 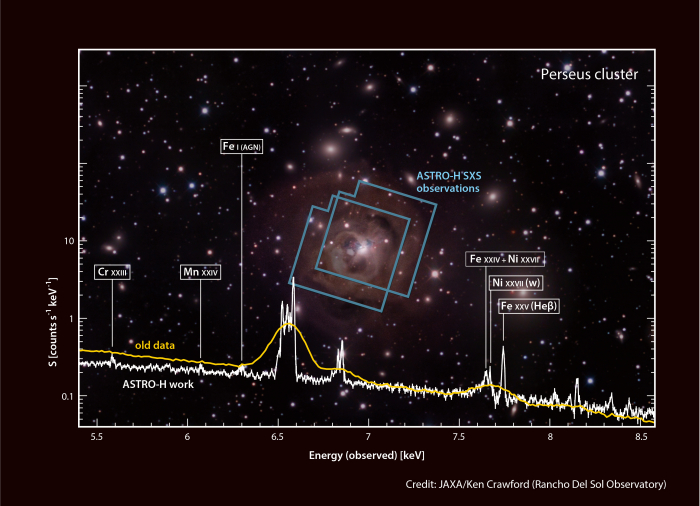 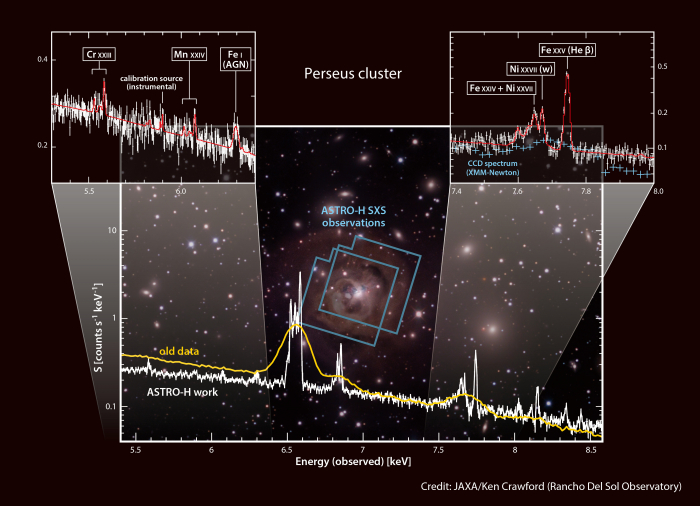 Launch Success of H-IIA Launch Vehicle No. 30 with X-ray Astronomy Satellite (ASTRO-H) Onboard