An international team1 observed the hot gas in the Perseus cluster with the Soft X-ray Spectrometer (SXS)2 on board the X-ray Astronomy Satellite ASTRO-H ("Hitomi") during its initial operation phase, which started one week after liftoff. The total integration time was 230,000 s.

The energy resolution of the SXS data was high, equaling the best resolution estimated during ground testing. The observation data demonstrated the good on-orbit performance of the SXS and its ability to measure the velocity of hot gas with resolution of at least 20 times better than previous instruments'.

This observation was the first measurement of the velocity of hot gas in the center of a galaxy cluster.

At the center of the Perseus cluster, a gigantic black hole emits powerful jets that collide with the surrounding hot gas and push it outward. For this reason, large turbulent flows of the hot gas were expected. However, the SXS observation revealed that the chaotic motion was small and the hot gas was calm, despite the violent conditions.

These results are presented in a paper published on June 7, 2016, in the journal Nature. 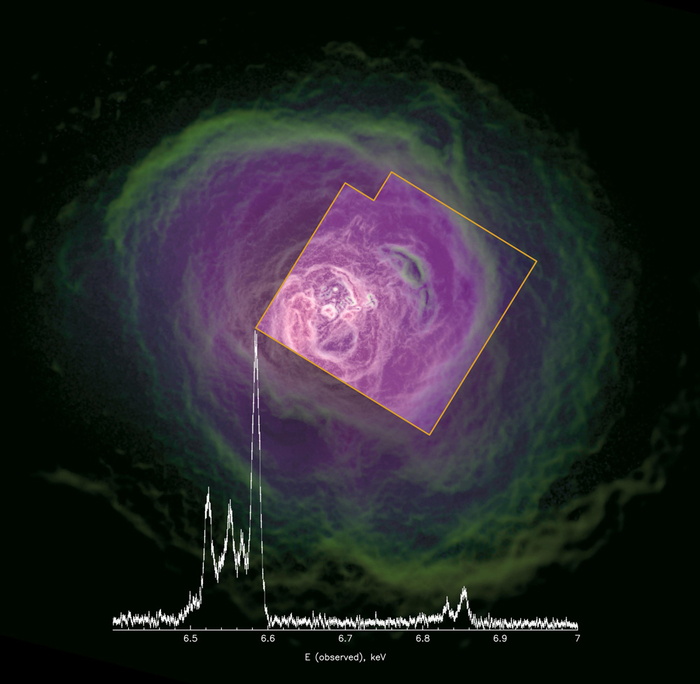 X-ray image of the Perseus cluster taken by Chandra X-ray satellite overlaid with spectral data by the X-ray Astronomy Satellite ASTRO-H ("Hitomi"). The orange box shows the field of view of the SXS on board ASTRO-H. © Hitomi collaboration, JAXA, NASA, ESA, SRON, CSA

Galaxy clusters are among the largest, most massive structures in the universe. The gravitational pull of dark matter binds together more than 100 galaxies and hot gas that reaches temperatures exceeding 50 million kelvin. At the center of a galaxy cluster, there is often a galaxy that harbors an active black hole emitting powerful jets. Because the jets push out the surrounding hot intracluster gas and thus generate inflating bubbles, some researchers expected that turbulence should be present in the hot gas stirred up by the jets.

The research team took about a week to observe the Perseus cluster with the SXS during the initial operation phase of ASTRO-H.

The Perseus cluster, located 250 million light years away, is the brightest galaxy cluster in the sky when observed in the X-ray band. There is a large store of X-ray data on the Perseus cluster, so it is one of the best targets for the initial operation and calibration of instruments.

The radio galaxy NGC 1275 at the center of the Perseus cluster contains a massive black hole that emits relativistic jets. Previous observations discovered that the jets were pushing out the hot intracluster gas. Since then, researchers have been working to understand how the relativistic jets affect this surrounding gas.

Studies on gas motion are essential to understanding how the jets' energy from the massive black hole is supplied to the surrounding medium and how the relativistic jets affect the intracluster gas.

Based on the SXS data, the research team determined that the velocity of the turbulence in the hot gas was about 164±10 km/s within a distance of 100,000 to 200,000 light years from the center of the cluster. This velocity is unexpectedly low and means that the pressure generated by the turbulence was only 4% of the thermal pressure.

1 The international team consists of about 220 members of the ASTRO-H project.

2 The SXS uses a technology called microcalorimetry, which was developed by NASA. It uses multiple stages of coolers to lower the temperature of the sensor to 0.05 K. With the ability to measure X-ray photon energies with resolution of 20 times better than previous detectors', the ASTRO-H microcalorimeter was intended to gather an abundance of invaluable data. For an object moving along the instrument's line of sight, the X-ray photon energy is shifted by the Doppler effect. The microcalorimeter could accurately measure these small energy shifts better than previous devices could, making it possible to measure for the first time the motion of the hot gas in large-scale objects such as galaxy clusters.

Launch Success of H-IIA Launch Vehicle No. 30 with X-ray Astronomy Satellite (ASTRO-H) Onboard