A 10 year sunburn: spectral evolution of a dark asteroid surface after ten years of space weathering

When asteroid 596 Scheila collided with an object in the asteroid belt between Mars and Jupiter in December 2010, a fresh layer of material was exposed on the asteroid surface ※1 . An international research team observed the spectrum (wavelengths of reflected light ※2 ) from the asteroid approximately ten years later, to see how space weathering ※3 affects the surface over a genuine timescale. Within the uncertainty of the observations, the observed spectra was consistent with that observed immediately after the 2010 impact event. This suggests that the surface colour of dark asteroids is not significantly altered by space weathering over a time period of ten years. This study is the first example that investigates spectral changes due to space weathering on the surface of an actual asteroid in the Solar System. Models based on this observation suggests that asteroids with relatively young surfaces (less than about 1000 years) can be considered to have experienced negligible evolution through space weathering, potentially changing how we understand their properties.

The results of this research were published in the Astrophysical Journal of Letters, an academic journal published by the American Astronomical Society, on October 27, 2022.

We now know that the surface layer of asteroids, which are airless celestial bodies without rain, wind or an atmosphere, are not always fresh, and that the colour of the surface material can change due to the effects of space weathering. However, it has only been in the last ten years that this fact has been clearly established.

The mystery first arose in the 1970s, when the spectra of asteroids and meteorites were first being compared. No asteroids in the asteroid belt were discovered that had a spectra similar to that of the ordinary chondrites, which are the most frequently discovered meteorites on Earth (comprising roughly 90% of those discovered). Instead, the asteroid belt was populated with S-type asteroids ※4 which had a redder spectra (reflect more strongly at red wavelengths). At that time, two theories emerged to explain the identity of the S-type asteroids. The first suggested they were stony-iron meteorites which showed a similar spectra, but were much rarer as they consisted of just 1% of the meteorites found. The second said the S-type asteroids were the commonly-found ordinary chondrites, whose spectra had changed due to space weathering. One method to tackle this problem was to undertake experiments on Earth that replicate the process of space weathering.

However, this becomes a different story if an asteroid can be observed with a fresh surface.

In December 2010, the T-type asteroid ※4 596 Scheila was hit by an asteroid several tens of meters in size. Ejecta from the collision crater covered the top layer of material to reveal a completely renewed surface layer. This was revealed in the slope of the asteroid spectrum at near-infrared wavelengths (0.8 - 2.5 microns) which became red after the collision, indicated a fresh surface layer ※1 . Space weathering on the surface of 596 Scheila therefore has the effect of creating a bluer asteroid spectrum. Similar results have been obtained in laboratory experiments on the effect of space weathering on primitive meteorites that originate from dark asteroids such as 596 Scheila. This trend for the spectral change due to space weathering is therefore consistent.

This year (2022) will be about ten years since the collision with 596 Scheila occurred. The asteroid's refreshed surface has therefore been exposed to space weathering for about a decade, after it was exposed in December 2010. This presents a great opportunity to observe how the spectrum changes due to space weathering in real time over a ten year period.

Our team therefore obtained spectra of 596 Scheila at near-infrared and visible wavelengths using the 3.0m NASA Infrared Telescope Facility (IRTF), and the 1.05m Murikabushi telescope at the National Astronomical Observatory of Japan's Ishigakijima Observatory, respectively. Changes since the 2010 collision were then investigated by comparing the new spectra of 596 Scheila with data from just after the collision. 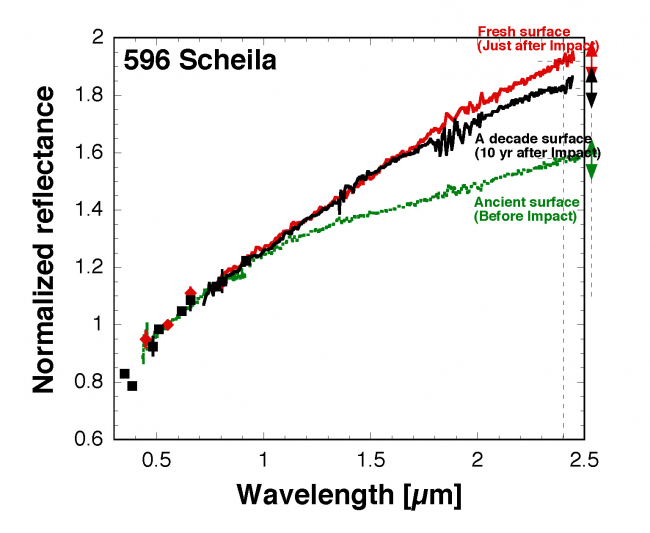 Figure 1: Plot showing the change in the spectrum of 596 Scheila before and after the collision that refreshed the asteroid surface. The horizontal axis shows wavelength of the reflected light, and the vertical axis is the reflectance intensity, normalized to the reflectance at a wavelength of 0.55 microns. When intensity increases as wavelength increases, we say the spectrum is "red". Conversely, a decreasing intensity with increasing wavelength is said to be "blue" (modified from Hasegawa et al. 2022b). The green data points are from observations taken before the impact, and therefore show the spectrum of a surface that has been weathered for many years. Red points are observations obtained immediately after the impact (fresh surface). Black data points are observations ten years after impact, showing the data for a surface subjected to space weathering for about 10 years. The arrows on the right side of the figure indicate the observational error range.

In these observations, the asteroid spectrum did not change even after being exposed to the effects of space weathering for about ten years. This is within the range of predictions from past laboratory experiments. However, this is the first time that we have observed that there is no spectral change from space weathering on the surface of an actual asteroid over a timescale of ten years under conditions where the exposure time can be accurately known. As with the sample from asteroid Itokawa, these observations therefore also support the validity of the laboratory experiments (at least on timescales of a decade).

The next question was whether spectral change due to space weathering is a phenomenon that occurs linearly or logarithmically with time. From the spectra of 596 Scheila shortly after the impact, we modelled the spectral change assuming a linear and then logarithmic change from this time. Comparing this with our recent observations suggested that the change had been linear (figure 2).

Furthermore, Figure 2 suggests that the spectral change due to space weathering would not be significant for about 1,000 years. This means that if a dark asteroid with a spectrum like 596 Scheila is discovered with a surface age of about 1,000 years, we can assume that this is a surface that has not undergone substantial space weathering. Through a similar method, this research also found that the spectral changes of minor celestial bodies that are redder than D-type asteroids ※5 also did not change over hundreds of years.

On September 26, 2022, NASA conducted an experiment in which the DART spacecraft crashed into the asteroid moon Dimorphos of asteroid 65803 Didymos. Observations after the impact by probes and telescopes have revealed a substantial quantity of ejecta was expelled from the surface. In other words, the surface layer of Dimorphos has been renewed in a similar manner to 596 Scheila.

The European Space Agency plans to rendezvous with Didymos in 2026 with the spacecraft Hera ※６ to observe the asteroid and its moon. Hera is equipped with a thermal camera of the type that was onboard Hayabusa2. Didymos and Dimorphos are both S-type asteroids with a spectra and albedo that are different from that of 596 Scheila, and laboratory experiments have shown that space weathering over thousands of years will not change the spectrum. Therefore, it is expected that the surface layer Dimorphos can be observed in a fresh state even after the arrival of the Hera spacecraft. 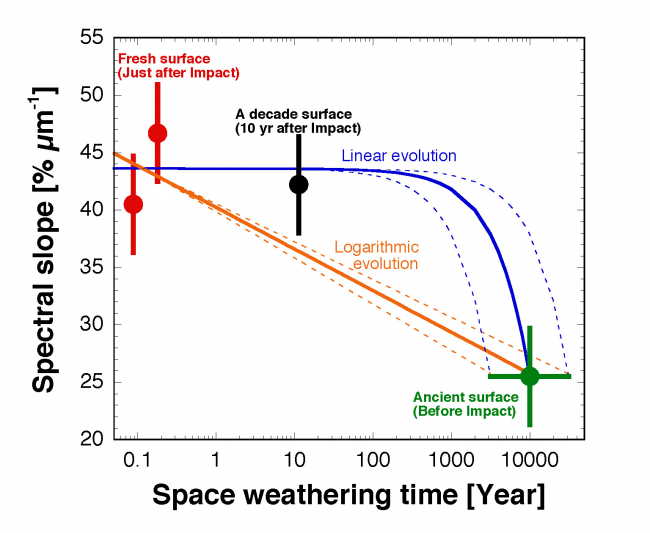 ※2 Spectrum
The spectrum refers to the division of light into its respective wavelength components, like a "rainbow" and measuring the intensity of each component. Spectroscopy is performing this rainbow division of light to obtain the spectrum. A red spectrum refers to a spectrum of the reflected light whose intensity (amount of reflectance) increases as the wavelength of light increases. Conversely, if the reflectance decreases with increasing wavelength, the spectrum is said to be blue.
Please see https://mmx-news.isas.jaxa.jp/?p=1488&lang=en

※3 Space weathering
Space weathering is the change in appearance (colour and brightness) of surface material caused by the impact of the solar wind and micro-meteorites.