If we're ready to explore, how about this destination? Asteroid with a refreshed surface after losing its top layer discovered in the asteroid belt.

How did our Solar System form and evolve? Various models for the creation of our system of planets have been proposed, but the planets themselves provide unfortunately little information as their interiors have melted and erased evidence of the early stages of formation. However, situated between Mars and Jupiter, are the asteroids of the asteroid belt whose smaller size means they are thought to have not undergone melting in their inner regions. These minor bodies therefore preserve information on the early Solar System, making their properties key to understanding how the planets formed and evolved.

Observations of the near-infrared spectra ※1 of the 114km diameter asteroid 596 Scheila that orbits within the asteroid belt revealed that the asteroid changed colour after an impact event in December 2010. This suggests that the older surface layer of 596 Scheila, which had been exposed to outer space for a long period, had been covered with fresh subsurface material ejected from the impact crater. The asteroid colour became redder after the collision, indicating that the near-infrared light from the asteroid shifts towards blue due to prolonged space weathering ※2.

The observations were conducted before and after impact by an international team of researchers, led by HASEGAWA Sunao, Associate Senior Researcher at ISAS, JAXA, in collaboration with researchers from Massachusetts Institute of Technology, the European Southern Observatory, University of Hawaii, Seoul National University, Kyoto University, Charles University, Kobe University and Laboratoire d'Astrophysique de Marseille.

There are many minor bodies with a red spectrum similar to the fresh surface of 596 Scheila at the outer edge of the Solar System, which is redder than those typically found in the asteroid belt. The blueing caused by space weathering moreover suggests that the dark and red minor bodies we can currently observe may have once been redder still. Many such dark and red bodies exist in the asteroid belt. These observations therefore suggest that many more celestial bodies in the asteroid belt may have originated from the outer edge of the Solar System ※3 than previously thought.

The results of this research were published on 2022/01/06 in the Astrophysical Journal Letters, an academic journal of the American Astronomical Society.

The many craters on the surface of the Moon and on asteroids demonstrate that the history of the Solar System is a history of "collisions". However, the craters on the surface of a minor body have been accumulated since the formation of that body, and not recently formed. The impact on 596 Scheila is therefore the first example humans have of observing a collision with an asteroid.

In December 2010, asteroid 596 Scheila that resides in the asteroid belt between Mars and Jupiter, suddenly exhibited a comet-like appearances, with the characteristic coma and tail leading out from star-like point source and ejecting dust. The dust cloud released from the 596 Scheila coma has a different shape to a regular comet, and the activity (release of dust) was also transient. Past studies modelled this phenomenon based on the observed physical quantities of 596 Scheila, and knowledge of collision behaviour obtained at the Hypervelocity Impact Facility at ISAS, and revealed that it was caused by the collision of 596 Scheila with a celestial body with a diameter of 30 - 50m (Figure 1).

Figure 1: Observation obtained with the Ishigakijima Astronomical Observatory / Murikabushi Telescope and the image of the collision phenomenon reproduced based on the model calculation. The observational image of the collision phenomenon is faithfully reproduced by the model calculation. (Research results in Ishiguro et al. 2011 ApJ 741, L24. credit: NAOJ)

The impact of 596 Scheila, which is thought to have a very primitive composition, therefore gives the opportunity to develop the following research.

In the asteroid belt, asteroids that have a diameter of 100km or more are generally considered to have been spared from catastrophic destruction and are instead survivors of the primitive planetesimal population that existed in the early stages of the Solar System's formation. However, even these surviving primitive planetesimals continue to undergo space weathering of their surfaces causing changes in their spectra, as well as changes from their early orbits due to the influence of Jupiter and Saturn. Nevertheless, knowledge of the current asteroid belt can be combined with a variety of different pieces of information and models to explore the history and origin of the Solar System. In order to clarify the composition and distribution of the primitive planetesimals at the time of the asteroid belt's formation, our international research team have therefore been working to obtain near-infrared spectroscopic data for objects which have not previously been observed through a spectroscopic survey of asteroids in the asteroid belt with a diameter of 100km or larger.

In scrutinizing both collected and previously published data, our research team noticed that there was now near-infrared spectroscopic observations for 596 Scheila that was performed both before and after the 2010 collision phenomenon. We therefore examined the spectra before and after the collision, using previously published data and new observations conducted for this study. The result of the comparison was the detection of a variation in the spectra at wavelengths of 0.8 - 2.5 microns in the near-infrared, although no spectral variation could be seen in visible light or wavelengths of 3 microns. This variation shifted the slope of the near-infrared spectrum to redder wavelengths after the collision (the spectral type changed from T-type to D-type) (Figure 2). 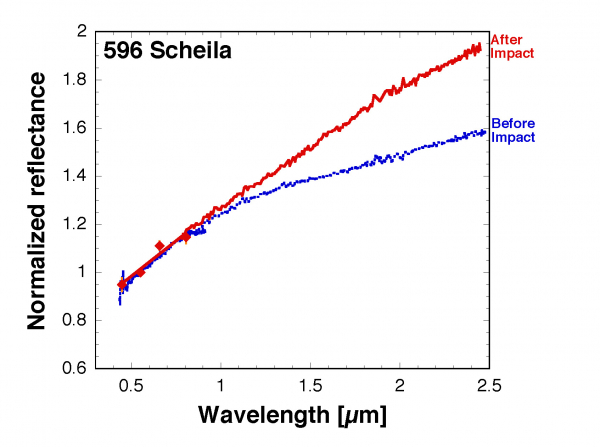 There are several possibilities for changes to the spectrum before and after after the collision, but a likely factor is the change in the spectrum due to space weathering. Before the collision, the surface layer of the asteroid would have experienced weathering from being exposed to space. The surface layer was then covered by fresh material released from within the crater formed during the impact with the celestial body. This covered the weathered material to rejuvenate the appearance of the surface and alter its spectrum.

When we consider the other asteroids in the asteroid belt, the currently observable surface layer of the asteroids is one that has experienced space weathering. Therefore, in light of this discovery, it is possible that the fresh (non-space weathered) spectra of C, P, T and D-type asteroids, which are thought to have the same spectra as the carbonaceous chondrite meteorites and possess a primitive composition, are actually redder.

In the outer Solar System beyond Neptune, the solar wind and micrometeoroid impacts that are assumed to be the cause of space weathering are thought to have a much weaker effect than in the asteroid belt. It is therefore believed that celestial bodies in this outer region have not undergone significant space weathering. This area is populated with P, T and D-type spectra asteroids and those with even redder spectra, making the overall population redder than those found in the asteroid belt. Based on this, it seems plausible that the real spectra of the P, T, D-type and some C-type asteroids in the asteroid belt are in fact redder than their observed surface, with spectra that match the minor bodies in the outer region of the Solar System, and that they were originally from this outer region.

An impact experiment was also conducted by the Hayabusa2 mission using the onboard small carry-on impactor (SCI). From spectroscopic observations of the generated artificial crater and the natural craters on the surface of 162173 Ryugu, the results from the SCI experiment showed that the fresher material has a bluer spectrum than the older surface. This trend is opposite to the one found in this study. However, the reason for this opposing result is that (1) 596 Scheila and Ryugu have different spectral types and (2) Ryugu may have passed very close to the Sun as it moved from the asteroid belt to the vicinity of the Earth and became heated during that time. Therefore, this results are not necessarily in contradiction and these differences may assist in understanding the history of Ryugu's evolution.

The Martian moons are the target exploration bodies for the Martian Moons eXploration (MMX) mission. It has been proposed that Mars's moon, Phobos, may be a captured D-type asteroid. As this research suggests that space weathering causes a blueing of the spectra, it could be expected that spectrum of the fresh Phobos material would be redder than the D-type asteroids, and resemble a celestial body from the outer Solar System. This would suggest Phobos has likely moved from a formation location in the outer edge of the Solar System. Alternatively, there is a theory that the relatively blue parts of Phobos's surface are due to the space weathered top layer of material shifting to expose fresh surface. In this case, it would be hard to conclude that D-type small bodies redden due to space weathering. This will need to be resolved in the future. To settle the origin of Phobos, sample return from both the surface and subsurface material are being planned by MMX.

※1 Spectrum
A spectrum is an image or graph that shows the distribution of intensity at each wavelength, divided into wavelength components like a rainbow. Spectroscopy is the division of light into its "rainbow"-like constitutional wavelengths to obtain a spectrum. Having a "red spectrum" refers to a spectrum where the intensity of the reflected light increases as the wavelength increases. Conversely, if the reflectance intensity decreases, the spectrum is said to be "blue".

※2 Space weathering
The change in appearance (colour and brightness) of the surface material due to the impact of the solar wind and micrometeorites.

※3 The outer edge of the Solar System
Region where small celestial bodies orbit the Sun beyond the orbit of Neptune.